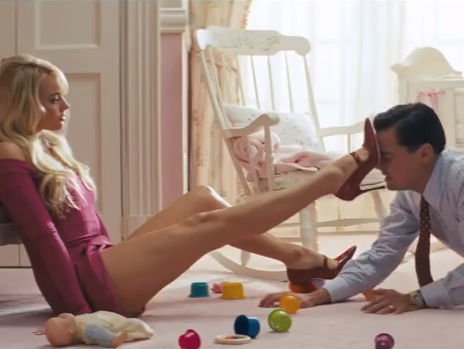 The Wolf of Wall Street soundtrack is heavy on blues music, and includes some familiar names such as Elmore James, Howlin’ Wolf, and Bo Diddley. (Critics frequently note the quality of Scorsese’s soundtracks, from Mean Streets to The Departed, which often lean heavily on classic rock.) But one of the songs prominently featured in a couple of scenes in The Wolf of Wall Street is by a blues-rock duo you probably haven’t heard of: The band is the Los Angeles-based 7Horse, with Phil Leavitt on drums and lead vocals, and Joie Calio on guitar. (The two previously played together in the alt-rock group Dada, and have been playing together for two decades.)

“Meth Lab Zoso Sticker” is also the first song heard in the film’s second trailer. It’s a catchy and exciting blues number. But how did Scorsese hear it?

“It’s something we may never know,” Leavitt tells Mother Jones. “We got an email back in the summer, I think it was in July, from the lawyer who was clearing the music for the film. It came out of the blue, and I still to this day don’t know how Martin Scorsese or his people heard it, or who found it. I dug into it a bit and found out that Scorsese finds a lot of his own music for his movies. Randall Poster and [The Band’s] Robbie Robertson also worked on the music. Maybe they heard it on satellite radio.”

The song is the second single off of the duo’s 2011 album Let The 7Horse Run. (The band’s influences include Son House, the Who, and Merle Haggard.) According to Leavitt, the song is “an expression of male sexual bravado, coming from a traditional of blues and rock ‘n roll, that’s about a guy who comes to town and announces to all the ladies, ‘I’m here, and I got something for you!'” The song was initially written via iPhone, with Calio sending Leavitt the guitar riff in a voice memo, with the words “Meth Lab Zoso Sticker” attached to it. Leavitt took it from there, writing the rest of the lyrics.

“It’s like being in Oprah’s Book Club! We feel vindicated because we knew we had something kind of cool.”

When the single was released, it didn’t make much of a splash, beyond some play on satellite radio. “People didn’t wanna come to the party on this one,” Leavitt admits. But its induction into the pantheon of Scorsese-endorsed music might just make up for that.

“It’s like being in Oprah’s Book Club!” Leavitt (a big Scorsese fan) says. “We feel vindicated because we knew we had something kind of cool.”

Though 7Horse never spoke to Scorsese directly, they were given a breakdown of the scenes where the song might appear in the film, prior to the director’s final cut. The lawyer and band negotiated to have the song cleared for thirteen total minutes. “One of those scenes had a description in which Leonardo DiCaprio has sex with a girl on top of a pile of money,” Leavitt recalls. “And we thought, ‘Oh, that’s perfect!’ It seemed obvious to me that it would work.”

Oddly enough, this isn’t Leavitt’s first connection to a Scorsese film. Leavitt’s hometown is Las Vegas, where his father was a blackjack dealer. So when Scorsese and his crew came through Vegas to shoot the 1995 crime saga Casino, his dad was given a small part. “He’s one of the guys in the count room,” Leavitt says. “It’s a weird coincidence, really.”

Nowadays, 7Horse is putting the final touches on their second album, which should drop in early 2014. Once that’s out, the pair hope to be out on the road touring for the rest of the year.

“We started this project from nothing, and had to borrow money to get out on the road, to record the record,” Leavitt says. “After getting out there and hauling our gear, playing whatever small bar we could, doing whatever we could to get our name out there, here comes Martin Scorsese to put his stamp of approval on what we’re doing. It’s a thrill…The movie, it lasts forever.”