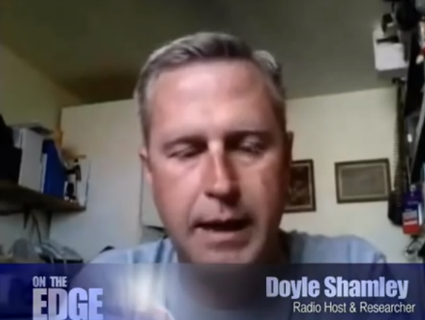 When state Sen. Jennifer Fielder, vice chairwoman of the Montana Republican Party, needed an expert on natural resources to testify before the state’s Environmental Quality Council earlier this year, she turned to Doyel Shamley.

An Army veteran and president of a Nevada-based firm called Veritas Research Consulting, Shamley’s trip to Montana was only the latest in a long line of appearances as an expert witness on land management. There he was at a county board of supervisors in the Sierras, on behalf of the California Association of Business, Property and Resource Owners. And before the Arizona Senate. And in Northern California, alongside a local sheriff. And in southern Arizona, at an event sponsored by the state chapter of Americans for Prosperity, a leading conservative group backed by the Koch brothers. And in Kingman, Arizona, discussing wolves. In 2012, at the invitation of Rep. Paul Gosar (R-Ariz.), he testified at field hearing for the House Committee on Natural Resources. On his website, he lists four current Republican congressmen—Reps. Mark Amodei (R-Nev.), Steve Pearce (R-N.M.), Rob Bishop (R-Utah), and Gosar—as “clients.”

But his interest in the federal government goes far deeper than water rights and wildfire prevention. By day, Shamley is a consultant and natural resources coordinator for Arizona’s Apache County. But by night, he’s a conspiracy theorist who until recently hosted an online radio show called The Hour of the Time, during which he speculates that UFO sightings are a false-flag operation by the Illuminati to accumulate more power, and federal agents killed his friend because he was asking questions about the attacks on the World Trade Center.

In an appearance on the 2009 conspiracy theory DVD New World Order: The Battle for Your Mind and the Truth to UFOs, Shamley said his activism irked his superiors during a decorated career in the Army. “I did classes in the military on the New World Order, etc., to my troops and my platoons,” he said. “Everything from the sham of fiat money and the federal reserve centralized banking system to the Illuminati to Council of Foreign Relations, Tri-Lats, all the typical subjects and me and my squad leaders, we would hand out literature and have classes in the barracks at night.” (You can rent the video for $3.99 on Amazon.)

Reached by phone while clearing brush on an Arizona mountainside, Shamley distanced himself from the “fearmongering” of other conspiracy theorists like Alex Jones, whom he considers “a fool.” Indeed, for a man who believes dark forces are pushing the globe toward a one-world socialist collective, Shamley is something of an optimist. “Do I think everything’s bright and shiny and we can all hold hands and sing kumbaya? No, that’d be ludicrous,” he says. But he hasn’t given up hope, either. “Somewhere something’s gonna give—and gotta give—for us to get back on a path correction in this county.”

Shamley and The Hour of the Time have dabbled in 9/11 truther theories. Shamley believes the show’s former host, a Christian Identity theorist and former member named William Cooper, was assassinated for predicting that the New World Order would bring down the World Trade Center. He penned a 2002 essay in which he contended that “terrorism is really just part of a grand Hegelian dialectic scheme to bring about their desired change and the end result that the illuminati want, a New World Order.” But Shamley says 9/11 is not a focal point for him: “I don’t hardly ever talk about 9/11 because what I said from the beginning to pretty much anyone who has ever asked is we’ll never know everything there is to know about it.”

At the hearing in Helena, Fielder, the Montana GOP’s vice chair, identified Shamley as an expert in natural resources who runs an Nevada-based consulting firm. She made no mention of the radio show. Shamley did not discuss his theories in front of the council, which includes state legislators, citizen representatives, and a deputy from the governor’s office.

But the Environmental Quality Council hearing came three weeks after Fielder promoted (and attended) a two-hour seminar on local sovereignty organized by a group called Defend Rural America, an organization with which Shamley is also affiliated. That event’s keynote speaker, DRA founder Kirk MacKenzie, alleged that a cabal of international banking families was responsible for pushing through baseless environmental regulations. At the event in Montana last month, MacKenzie called environmentalists “domestic terrorists.”

Fielder said in an email that Shamley had been selected by “an evenly bi-partisan council,” but that account was contradicted by Shamley and another legislator, Democratic state Rep. Ed Lieser, who both said Fielder was responsible for the invitation.

None of the congressmen cited by Shamley acknowledged any relationship with him. “He was a witness in 2012 repping Apache co.,” Bishop* spokeswoman Melissa Subbotin said in an email, adding that she would ask Shamley to remove the congressman’s name from his website. “We aren’t a ‘client.’ I think that was our only interaction. Not sure about the New World Order thing.”

“I do not know this individual and certainly have never worked with him in any way,” said former Sen. Jon Kyl (R-Ariz.), who is also listed as a client on Shamley’s website.

Shamley acknowledges that there was no financial relationship, but says congressional staffers call upon him frequently for help understanding policy on things like gray wolf management. “Did they have me on retainer? No.”

In 2008, he was elected natural resources coordinator for Apache County, a sprawling block that hugs the New Mexico border for more than half the length of the state. Shamley has used that position to rein in the government he’s concerned will soon grow tyrannical. His crowning achievement, which he explains in a DVD he sells for $25 and in six-hour PowerPoint presentations, was in getting the county to pass a pair of resolutions asserting its authority over federal lands.

Shamley doesn’t see a conflict between his view that governments are manipulated by a sinister socialist cabal and his own career in government. “I don’t know about the overlap thing—I have my personal beliefs, the same things I fought for everyone to have when I was in the military,” he says. “What I believe about certain points in the government being defective you only have to look at the government right now.”

In other words, he compartmentalizes. “Data is data,” he says.

The only indication that Doyel Shamley, environmental consultant, and Doyel Shamley, New World Order radio host, are living the same life at all comes in the form of a note at the bottom of Veritas Research’s home page. Labeled “A final warning from an old friend, concerning the current state of affairs,” it links to an audio file:

“If you want a picture of the future, imagine a boot stamping on a human face, forever. The moral to be drawn from this dangerous nightmare situation is a simple one: Don’t let it happen. It depends on you.”

*Correction: This story originally misidentified Subbotin as a spokeswoman for Gosar.