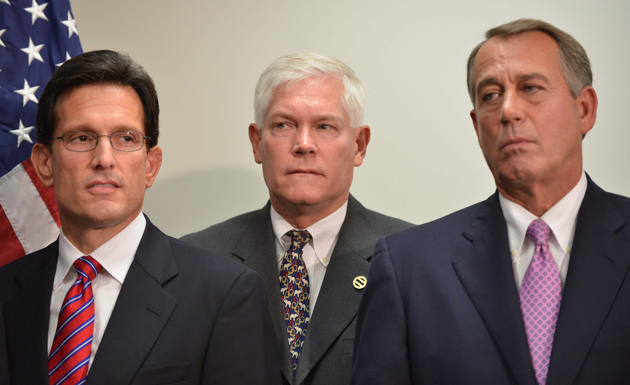 Three years ago, House Republicans pushed a bill to permanently eliminate taxpayer funding for abortions. The proposed legislation included an exception for women who had been raped—but only if it the rape was “forcible.” That language—and later, off-color comments about abortion and rape by two GOP Senate candidates, Todd Akin and Richard Mourdock—kicked off a national backlash against the Republican party. So this year, the House GOP is trying a new strategy: pushing an almost identical bill to limit abortion rights, while hoping that cutting out controversial rape provisions will limit the political blowback.

To that end, the GOP-run House of Representatives voted late Tuesday afternoon on the 2014 version of the No Taxpayer Funding for Abortion Act, a bill that would permanently ensconce the Hyde Amendment—a temporary measure that has been around since the 1970s and bans federal funding for abortions—in federal law. The bill doesn’t just ban federal funding for abortions, though—it also promises to limit Americans’ ability to buy private-sector health insurance that covers abortion.

Like previous versions of the No Taxpayer Funding for Abortion Act that passed the House in 2011 and 2012, this year’s measure has no chance of becoming law so long as Democrats hold the Senate and President Barack Obama occupies the White House. The bills, introduced by Rep. Chris Smith (R-N.J.), are designed to signal the Republican party’s priorities to its most hardcore supporters—and more broadly, to provide a taste of what the GOP would have to offer if it gained control of the Senate and the White House. (House Republican leaders have given this year’s version of the bill the number H.R. 7; the low number is a symbolic nod to its high priority.)

Previous versions of Smith’s bill have cost the party politically. The 2011 version launched the “forcible rape” furor. And this year’s bill, which Smith introduced last May, appeared again to raise questions about what counts as rape. An earlier version of the proposal would have required the IRS to verify that a woman claiming a medical expense deduction for abortion on her tax return was not committing fraud. Women may only claim these deductions if their abortions were the result of rape, incest, or life-threatening medical situations—leading anti-abortion activists to assail the bill’s sponsors for mandating IRS “rape audits.”

The bill the House voted on this Tuesday drops the “rape audits” provision. But Sharon Levin, the director of federal reproductive health policy for the National Women’s Law Center, says this is more of a face-saving measure than an improvement.

“They took out the provision that the public had been focused on to make this more palatable, politically,” she says. “The core of what this bill is about has not changed—making it as difficult as possible for women to get access to abortion.”

The bill would accomplish this, Levin says, by severely limiting Americans’ ability to buy health insurance that covers abortions.

Here’s how it would work. The Affordable Care Act includes hundreds of billions of dollars in tax credits to help individuals and businesses afford health insurance. Smith’s legislation would withhold all of these tax credits from individuals or businesses who purchase plans that cover abortions.

Basically, Smith’s bill would force people who want affordable health insurance to buy plans that do not cover abortion.

Many states that passed similar laws eliminating abortion coverage in Obamacare plans stipulated that women could purchase a separate policy, called a rider, that would specifically cover abortions. But few insurers bother to offer riders, and few women would buy them if they did—as with most medical events normally covered by insurance, few women ever plan to have an abortion. So under Smith’s law, if a woman on an Obamacare plan wanted an abortion and had not taken the unusual step of buying a rider in advance, she would have to pay for the abortion out-of-pocket—an expensive proposition. A May 2013 study from the Guttmacher Institute, a pro-abortion rights think tank, found that women whose abortions weren’t fully covered by insurance paid an average of $485 for the procedure.

But the most insidious element of Smith’s bill, according to abortion rights advocates, is a provision Smith frames as a transparency measure. A last-minute compromise change to the Affordable Care Act required that each state’s health insurance marketplace to offer at least one multi-state plan that did not cover abortions. Smith accuses insurers of often failing to disclose whether their policies cover abortion. As a solution, he proposes forcing insurers to note when they will charge an “abortion surcharge.”

Smith’s claim that insurers hide abortion coverage—and its supposed costs—was a rallying cry to anti-abortion activists throughout the rollout of the Affordable Care Act exchanges. Smith and other members of Congress repeatedly introduced legislation, such as the “Abortion Insurance Full Disclosure Act,” designed for more transparency.

Abortion rights proponents counter that Smith’s proposed “fix” consists of insurers lying to consumers about a supposed abortion surcharge that doesn’t exist. (In fact, abortion coverage makes the average insurance policy less expensive, because giving birth is much more expensive than an abortion.) Smith’s proposal relies on the confusing accounting methods required by the Nelson Amendment, which says that insurance policies that cover abortion must pay for that coverage from a separate account. To comply with this requirement, insurers place at least $1 of each individuals’ insurance premium payment into a separate abortion coverage account. “It’s not a new charge. It’s not an additional charge. It’s part of the premium you already pay,” Levin says. “For Chris Smith to require [insurers] to disclose a ‘surcharge’ is to require them to make a false statement.”

Levin adds that the provision is redundant as a measure of transparency. The Affordable Care Act already has a provision forcing insurers that cover abortion to disclose when they state the benefits their policies cover—in fact, abortion coverage is the only benefit that insurers are required to declare.

Smith’s office did not respond to requests for comments.

This article has been updated to reflect the fact that the House voted to pass the “No Taxpayer Funding for Abortion Act” on Tuesday by 224-192.