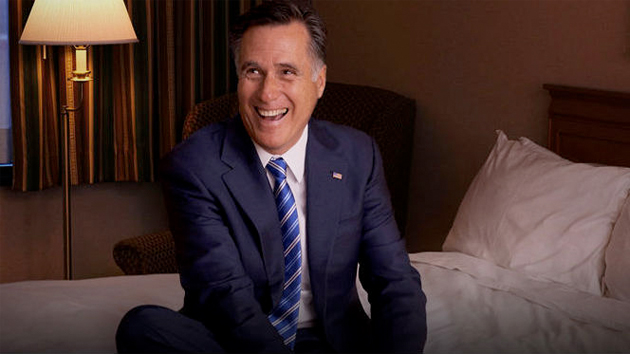 “I think I’m a flawed candidate,” says Republican presidential contender Mitt Romney, in director Greg Whiteley‘s behind-the-scenes documentary Mitt, which premieres on Netflix on Friday. The film, which spans six years and two Romney presidential runs, offers some intimate moments of the Romney family on the campaign trail. We get to see Mitt privately acknowledging that his image was boiled down to “the flippin‘ Mormon,” the family playing in the snow, Ann Romney talking about her horse, and Mitt ironing his tux sleeve while wearing it.

Furthermore, Whiteley’s film doesn’t include any scenes revealing how Romney and his team processed the release of the 47 percent video—news that came to reinforce Romney’s political persona. The reason? Limited access—and, according to Whiteley, the fact that the goal in making the movie wasn’t to please political junkies.

“I just simply wasn’t there when the 47 percent was uttered,” Whiteley said on a conference call on Wednesday. “And whatever damage control or spin mode [the campaign was] in, I just didn’t have access to that.” Whiteley noted that he sat down with Romney in November 2012 and asked him about the 47 percent comments but didn’t get an answer any different from what Romney had already told the press.

While covering the Romneys, Whiteley didn’t have a documentary crew along with him for the ride. “It was me and a camera,” he said. And Romney’s political aides were reluctant to be captured on film. But Whiteley (who got this gig after a mutual friend introduced him to Tagg Romney) was frequently granted generous access to the Romneys—and he never saw his role as that of a political reporter. As a result, Whiteley’s film is light—often intentionally—on strategy and commentary. (His past credits include New York Doll and Resolved.)

“The film is very apolitical,” Whiteley said. He calls Mitt the “inverse” of The War Room, the acclaimed documentary that followed Bill Clinton’s 1992 campaign staff, particularly Democratic strategist James Carville. “My access was the opposite,” he continues. “I didn’t get access to Stuart Stevens…but I had incredible access to the family, and that’s what the movie became…You’re getting the sense of what it’s like to be a member of this family [during a campaign].”

Here are a couple of clips from Mitt: