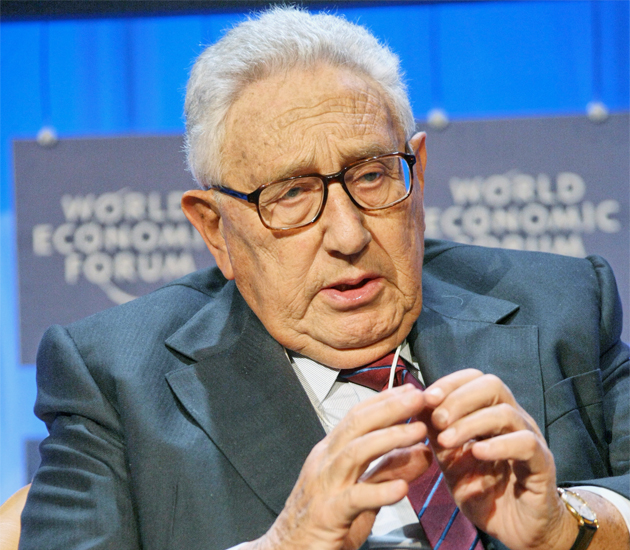 Only a few months ago, Henry Kissinger was dancing with Stephen Colbert in a funny bit on the latter’s Comedy Central show. But for years, the former secretary of state has sidestepped judgment for his complicity in horrific human rights abuses abroad, and a new memo has emerged that provides clear evidence that in 1976 Kissinger gave Argentina’s neo-fascist military junta the “green light” for the dirty war it was conducting against civilian and militant leftists that resulted in the disappearance—that is, deaths—of an estimated 30,000 people.

In April 1977, Patt Derian, a onetime civil rights activist whom President Jimmy Carter had recently appointed assistant secretary of state for human rights, met with the US ambassador in Buenos Aires, Robert Hill. A memo recording that conversation has been unearthed by Martin Edwin Andersen, who in 1987 first reported that Kissinger had told the Argentine generals to proceed with their terror campaign against leftists (whom the junta routinely referred to as “terrorists”). The memo notes that Hill told Derian about a meeting Kissinger held with Argentine Foreign Minister Cesar Augusto Guzzetti the previous June. What the two men discussed was revealed in 2004 when the National Security Archive obtained and released the secret memorandum of conversation for that get-together. Guzzetti, according to that document, told Kissinger, “our main problem in Argentina is terrorism.” Kissinger replied, “If there are things that have to be done, you should do them quickly. But you must get back quickly to normal procedures.” In other words, go ahead with your killing crusade against the leftists.

The new document shows that Kissinger was even more explicit in encouraging the Argentine junta. The memo recounts Hill describing the Kissinger-Guzzetti discussion this way:

The Argentines were very worried that Kissinger would lecture to them on human rights. Guzzetti and Kissinger had a very long breakfast but the Secretary did not raise the subject. Finally Guzzetti did. Kissinger asked how long will it take you (the Argentines) to clean up the problem. Guzzetti replied that it would be done by the end of the year. Kissinger approved.

In other words, Ambassador Hill explained, Kissinger gave the Argentines the green light.

That’s a damning statement: a US ambassador saying a secretary of state had egged on a repressive regime that was engaged in a killing spree.

In August 1976, according to the new memo, Hill discussed “the matter personally with Kissinger, on the way back to Washington from a Bohemian Grove meeting in San Francisco.” Kissinger, Hill told Derian, confirmed the Guzzetti conversation and informed Hill that he wanted Argentina “to finish its terrorist problem before year end.” Kissinger was concerned about new human rights laws passed by the Congress requiring the White House to certify a government was not violating human rights before providing US aid. He was hoping the Argentine generals could wrap up their murderous eradication of the left before the law took effect.

Hill indicated to Derian, according to the new memo, that he believed that Kissinger’s message to Guzzetti had prompted the Argentine junta to intensify its dirty war. When he returned to Buenos Aires, the memo notes, Hill “saw that the terrorist death toll had climbed steeply.” And the memo reports, “Ambassador Hill said he would tell all of this to the Congress if he were put on the stand under oath. ‘I’m not going to lie,’ the Ambassador declared.”

Hill, who died in 1978, never did testify that Kissinger had urged on the Argentine generals, and the Carter administration reversed policy and made human rights a priority in its relations with Argentina and other nations. As for Kissinger, he skated—and he has been skating ever since, dodging responsibility for dirty deeds in Chile, Bangladesh, East Timor, Cambodia, and elsewhere. Kissinger watchers have known for years that he at least implicitly (though privately) endorsed the Argentine dirty war, but this new memo makes clear he was an enabler for an endeavor that entailed the torture, disappearance, and murder of tens of thousands of people. Next time you see him dancing on television, don’t laugh.