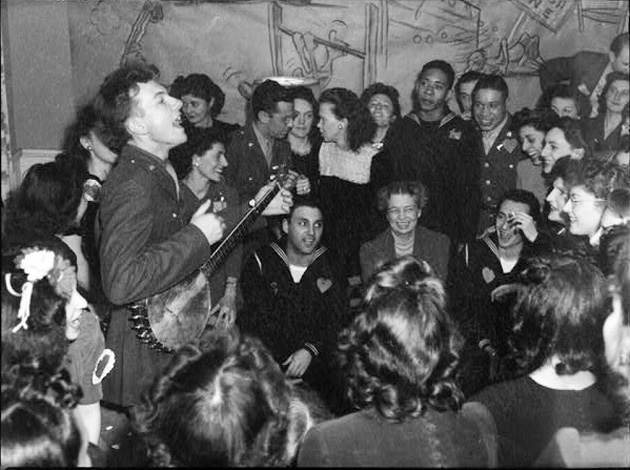 Pete Seeger performing at the opening of the Washington labor canteen, 1944. First Lady Eleanor Roosevelt is present.<a href="http://en.wikipedia.org/wiki/File:PeteSeeger2.jpg">Joseph A. Horne</a>/Library of Congress

Pete Seeger, the folk-music legend and activist, died on Monday at New York-Presbyterian Hospital. He was 94. His impact his on American culture was profound, as he influenced popular music and iconic musicians, including Bob Dylan and Bruce Springsteen, for decades.

“Once called ‘America’s tuning fork,’ Pete Seeger believed deeply in the power of song,” President Barack Obama said in a statement on Tuesday. “Over the years, Pete used his voice—and his hammer—to strike blows for worker’s rights and civil rights; world peace and environmental conservation. And he always invited us to sing along.”

Here are some cool clips, songs, and text for you to check out while reflecting on Seeger’s life and music:

1. Pete Seeger sings in Barcelona about the Spanish Civil War: “56 years ago, I had some friends who came to Spain,” Seeger tells the crowd. “Some of them did come back—and this is the song that they taught me. It’s a song of the Abraham Lincoln Battalion.”

2. Seeger testifies before the House Un-American Activities Committee (HUAC), 1955: For refusing to testify about his time in the Communist Party, he was later sentenced to a year in prison for contempt. But the conviction was overturned. Here’s an excerpt from his testimony:

I am not going to answer any questions as to my association, my philosophical or religious beliefs or my political beliefs, or how I voted in any election, or any of these private affairs. I think these are very improper questions for any American to be asked, especially under such compulsion as this. I would be very glad to tell you my life if you want to hear of it….

And while we’re at it, here’s Eric Clapton’s version:

4. When Pete Seeger hosted a TV show devoted to good folk music: It aired in the mid-1960s and was called Rainbow Quest. Here’s the episode with Johnny Cash and June Carter:

5. Seeger sings a protest of the Vietnam War and President Lyndon Johnson on the Smothers Brothers—and gets censored by CBS: His performance of “Waist Deep in the Big Muddy”—in which Johnson is essentially labeled the “big fool”—was initially nixed from a 1967 broadcast for being too political. A few months later, Seeger was invited back, and Americans got to watch:

6. Seeger wrote a song denouncing Joseph Stalin—and got a fun Fox News headline out of it: The folk singer’s previous support for the Soviet Union had been a less-than-flattering part of his legacy. (He left the Communist Party in the 1950s.) In 2007, Seeger revealed he had written a new yodeling blues song blasting Stalin, titled, “The Big Joe Blues.”

Here are some lyrics from “The Big Joe Blues”:

I’m singing about old Joe, cruel Joe. He ruled with an iron hand. He put an end to the dreams of so many in every land….

I got the Big Joe Bloo-ew-ew-ews!

Seeger remarked that it was the kind of song his old friend Woody Guthrie might have written in the 1950s.

7. Seeger sings “We Shall Overcome” on Democracy Now! and discusses his late wife Toshi Seeger:

8. Sam Cooke’s fantastic cover of Seeger’s “If I Had a Hammer“:

9. Olivia Newton-John covers Seeger’s “Where Have All the Flowers Gone?”

Here he is performing the song in the 1970s:

And here’s Bruce Springsteen playing it on his Seeger Sessions tour in 2006:

11. Seeger performing “This Land Is Your Land” (with Springsteen, naturally) at the Lincoln Memorial: They were celebrating the election of President Obama, shortly before his 2009 inauguration.