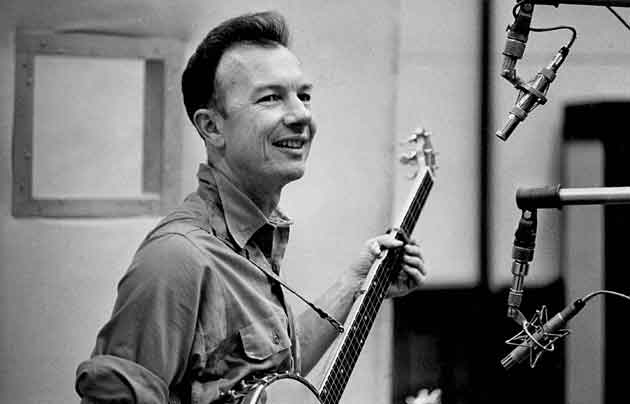 
Pete Seeger has passed. The obits will call him a legend. But many won’t capture an essential quality of the Seeger tale: as he fought for decades to advance political values and an artistic vision, he was hounded for much of that time by fierce enemies (most notably, the FBI and McCarthyites in the 1950s), and he whipped them. He persevered—and he won. He was never silenced. He played his music, protested wrongs, cleaned up the Hudson River, lived his ideas, and came to be celebrated for his devotion to music and principles. His revenge was simple: he kept on singing and, perhaps most important, encouraging others to do so. Seeger triumphed over his foes, not just because he outlived so many but because his voice was more powerful. Below are some thoughts I shared after attending a concert held four years ago to honor Seeger. The original headline for the post was, “Pete Seeger at 90: Surviving—and Winning—the Political Culture War.”

After watching Bruce Springsteen and Pete Seeger lead Barack Obama and hundreds of thousands of others in singing “This Land Is Your Land” at the pre-inauguration concert at the Lincoln Memorial, I noted that the concert “was a moment of victory in the political cultural war that has gripped the United States since the tumultuous days of the 1960s”:

The show at the Lincoln Memorial contained other moments signaling that the cultural civil war that began with the civil rights crusade, the movement against the Vietnam War, and the rise of hippie-dom was done—at least for now—and that the libs had won. Toward the end of the HBO-aired event, Bruce Springsteen, once a greaser-rocker, brought out folk music hero and activist Pete Seeger, once derided by conservatives as a commie, and Seeger led the crowd in “This Land Is Your Land.” This song is the liberal national anthem, written by Woody Guthrie in 1940 as a populist-minded response to Irving Berlin’s “God Bless America,” which was too rah-rah for Guthrie’s liking.

Well, Seeger Nation took another victory lap on Sunday night. At Madison Square Garden, a host of musicians (Springsteen, John Mellencamp, Emmylou Harris, Dave Matthews, Arlo Guthrie, Joan Baez, Steve Earle, Roger McGuinn, Ben Harper, Richie Havens, Rufus Wainwright, Tom Morello, Ani DiFranco, Rep. John Hall, and many others) and a full house feted Seeger on his 90th birthday. Norman Lear read birthday wishes from President Obama. Springsteen elegantly hailed Seeger and declared, “You outlasted the bastards.” (If I can find a text of Springsteen’s remarks, I will post or link to them.) And Seeger led the crowd for “Amazing Grace” and “This Land Is Your Land.” At one point, Seeger, ever-the populist, declared, “There’s no such thing as a wrong note as long as you’re singing.” One musical highlight: Matthews crooning a soulful version of “Rye Whiskey.” He noted his first concert as a lad was a Seeger show. (You can see my tweets from SeegerFest here.) The concert was, of course, a benefit–for Seeger’s Clearwater outfit, which preserves and protects the Hudson River.

Springsteen was right. Sometimes longevity–just keep on keeping on–is the best revenge. Seeger was once reviled as a no-good commie symp. He almost ended up in jail for defying congressional witch-hunters. Now he’s seen a turnabout–one that he has been pushing steadily, inch by inch, note by note, for decades. To every season….