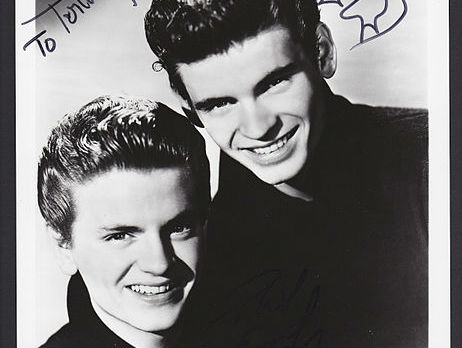 Phil Everly, who with his older brother Don made up the country/rock ‘n roll duo the Everly Brothers, died on Friday in Burbank, California, due to complications from chronic obstructive pulmonary disease. He was 74.

The Everly Brothers’ influence on popular music in the 1950s and 1960s was immense. The songs they strummed and sang (in legendary harmonies) were often big hits. During the height of their powers, they had almost three dozen hits on the Billboard Hot 100 singles chart, including “Wake Up Little Susie” and “Bye Bye Love.” The Everly Brothers were among the first ten acts inducted into the Rock and Roll Hall of Fame. The duo influenced some of the best artists of the 20th century, such as The Beatles and The Byrds. “We owe [the Everly Brothers] everything,” Bob Dylan said. “They started it all.”

I’m not going to pretend that I’m capable of writing the definitive or the most comprehensive Phil Everly obituary. There are a lot of remembrances already out there, and plenty of rock historians who can tell you much more about Everly’s place in musical history than I ever could. But what I can offer is my favorite Everly story—one regarding perhaps the most brilliant song that Everly never wrote.

In an interview with the Wall Street Journal published in June 2013, he talks about his beautiful house outside of Nashville, Tennessee, in Maury County. It was built in 1846, and has this unique bit of history to it, according to Everly:

During the Civil War, a famous Confederate lieutenant general named Nathan Bedford Forrest had a violent argument with a lieutenant named A. Willis Gould. Words were exchanged, Gould shot Forrest in the hip, and Forrest wound up [fatally stabbing] him. Forrest recuperated in our bedroom. I suppose there’s a song in that story someplace.

I’m not sure if Forrest’s ghost is hanging around, but I have a theory about this house. It won’t let you do anything to the structure it doesn’t like. We had a roof leak a few years back, and the carpenter impulsively wanted to solve the problem by drilling a hole in the floor. But the bit snapped right off. The house wouldn’t let him do it. This kind of thing has happened several other times.

(For the record, Forrest died in Memphis, but let’s just say it’s plausible that this Confederate ghost could find its way back to this estate.)

The idea for a Nathan Bedford Forrest death-match / freaky haunted-house country-rock song is even more interesting when you consider that Forrest was also the first Grand Dragon of the Ku Klux Klan, the namesake of Forrest Gump, and an accused war criminal. Under Forrest’s command, Confederate troops carried out the atrocity at Fort Pillow, where hundreds of surrendered black soldiers were slaughtered.

So who knows if he was being serious about this song. I hope so, since it would make for a terrific song. Sadly, it seems that Everly never got around to writing and recording it. But what he accomplished in life was, of course, already way more than enough. Some of the greatest rock music of the ’60s would not have sounded the way it did if it weren’t for Phil and Don. That’s a hell of a legacy to leave behind.