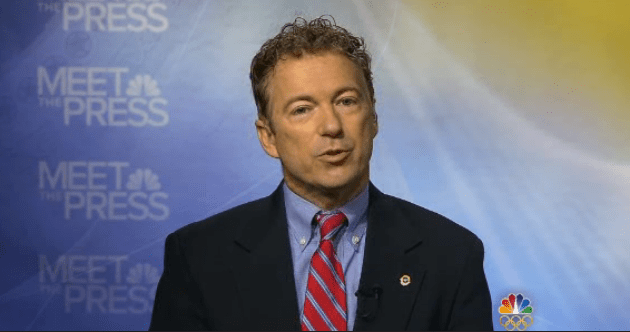 In 2011, after Republicans in Congress introduced a bill that would ban taxpayer funding for abortions except in cases of “forcible rape,” Democrats adopted a new line of attack: the GOP was waging a “war on women.” Instead of changing their policies, Republicans changed the subject, arguing that the sexual behavior of individual Democratic politicians—such as Anthony Weiner—proves the GOP “war on women” is a fiction.

On Sunday, Sen. Rand Paul (R-Ky.) became the latest GOPer to adopt this strategy, arguing on Meet the Press that former President Bill Clinton’s affair with White House intern Monica Lewinsky means Democrats are in no place to cry foul about the Republican party platform.

Paul made the comments after host David Gregory highlighted a moment in a September Vogue profile of Paul in which Kelley Paul, the senator’s wife, said, “Bill Clinton’s relationship with Monica Lewinsky should complicate his return to the White House, even as first spouse. I would say his behavior was predatory, offensive to women.”

I mean, the Democrats, one of their big issues is they have concocted and said Republicans are committing a war on women. One of the workplace laws and rules that I think are good is that bosses shouldn’t prey on young interns in their office.

And I think really the media seems to have given President Clinton a pass on this. He took advantage of a girl that was 20 years old and an intern in his office. There is no excuse for that, and that is predatory behavior, and it should be something we shouldn’t want to associate with people who would take advantage of a young girl in his office.

This isn’t having an affair. I mean, this isn’t me saying, “Oh, he’s had an affair, we shouldn’t talk to him.” Someone who takes advantage of a young girl in their office? I mean, really. And then they have the gall to stand up and say, “Republicans are having a war on women”?

When Democrats say there’s a “war on women,” they are not criticizing the personal conduct of GOP lawmakers. They’re talking about Republican policymakers’ sustained attacks on women’s reproductive rights. It’s hard to see what Bill Clinton’s sexual conduct tells us about today’s battles over reproductive rights policy—especially when he hasn’t held elected office for nearly fourteen years.