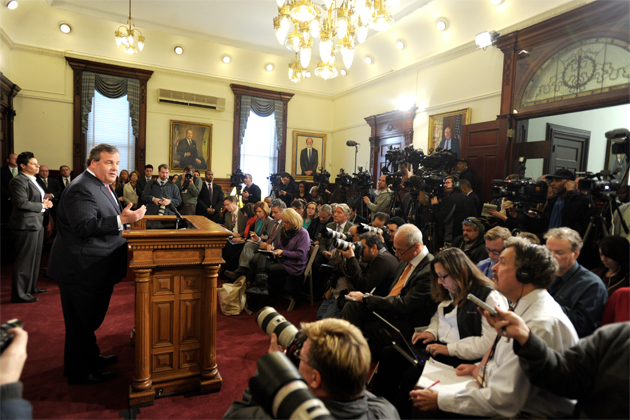 At last week’s press conference over the George Washington Bridge lane closings that left the New Jersey borough of Fort Lee gridlocked in September, GOP Gov. Chris Christie told reporters, “Whether there was a traffic study or not, I don’t know.” But whether or not the closures were part of a legitimate study—a Christie aide ordered the lanes closed without mentioning one—the resulting gridlock was analyzed by the Port Authority. The results were a bit obvious: If you close lanes to the George Washington Bridge, you cause traffic.

The post-jam analysis was released last week by a state assembly committee investigating the scandal. It focused on what would happen if two of the three access lanes reserved for Fort Lee residents were shut down and instead made available to other drivers. Fort Lee, according to the Port Authority, provides about 4.5 percent of George Washington Bridge traffic. The remaining 95 percent or so got to work a little quicker: The 11,592 non-Fort Lee vehicles saved about 5 minutes each during the closure, resulting in about 966 vehicle hours saved. That wasn’t nearly enough to outweigh the cost—Fort Lee traffic resulted in 2,800 vehicle hours of delay. And the analysis noted that even if the traffic queues were half as long, the outcome would still be a net loss. Also, many vehicles sat so long in traffic that they missed peak toll hours, resulting in a revenue loss of $550 a day (or $137,000 over the course of a year).

A review by the Bergen Record found that the actual results may have been even worse than this analysis suggests. Other towns’ residents also use the Fort Lee access ramps, so the closed lanes delayed as much as 25 percent of the bridge’s motorists. But Port Authority political operatives used the 4.5 percent figure to try to convince nearby Republican lawmakers that the study was legitimate and that Fort Lee didn’t need three lanes, according to the Record. An email from former Port Authority official and Christie high school classmate David Wildstein to recently fired Christie aide Bridget Kelly includes talking points for Republican assemblyman Declan O’Scanlon and Jeff Bader, president of a trucking trade group, about how the closures benefited many New Jersey drivers:

Although Wildstein and other Christie allies tried to paint the closures as part of a necessary study, some Port Authority employees were suspicious. One general manager wrote in an email before the closure that the study could be done without leaving Fort Lee with only a single lane. He asked, “What is driving this?” Another supervisor replied, “A single toll lane operation invites potential disaster…It seems like we are punishing all for the sake of a few.” 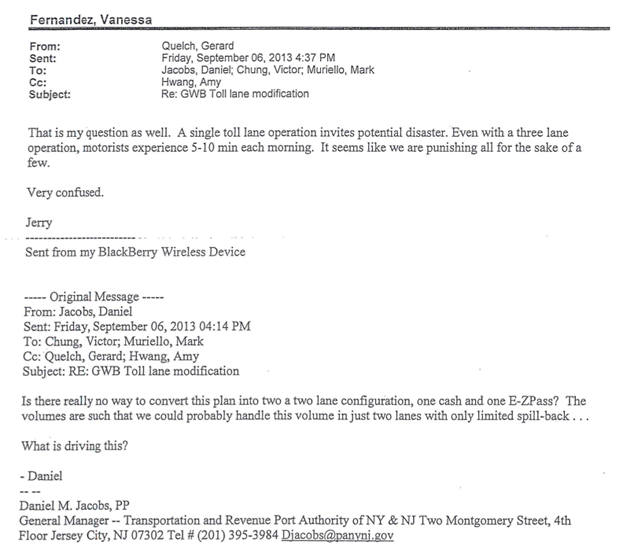 As the Washington Post‘s Wonkblog points out, traffic studies rarely affect traffic at all. Engineers can measure normal traffic, simulate a closure or other change, and plug the numbers into formulas provided by the Institute of Transportation Engineers to yield the likely outcomes. When traffic does need to be altered, agencies typically do limited trial runs with a public review process to minimize the impact.

Moreover, it does not take a traffic engineer to realize that taking two of three lanes away from Fort Lee would lead to long lines and lots of waiting. But the ultimate conclusion of the post-gridlock review was not so definitive: It reads only “TBD.” 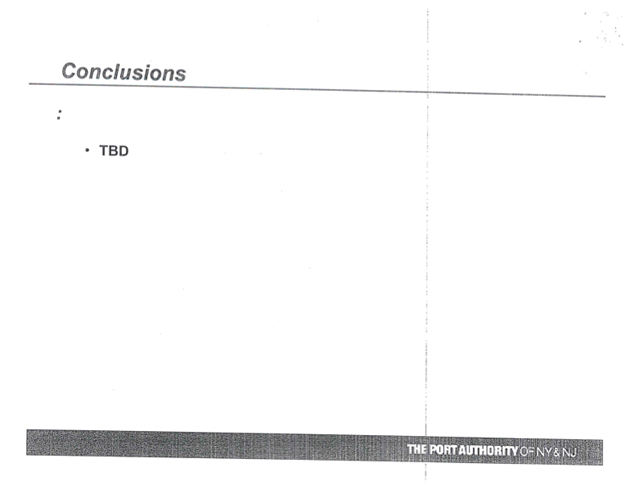