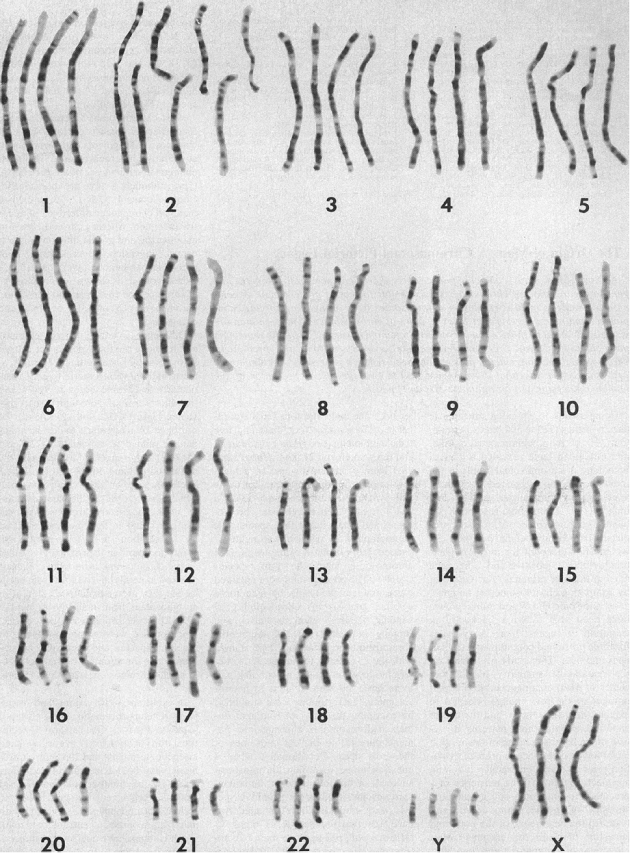 Side-by-side comparison of the chromosomes of humans, chimpanzees, gorillas, and orangutans (from left to right for each chromosome) From JJ Yunis, O Prakash, “The origin of man: a chromosomal pictorial legacy,” Science, March 19 1982. Reprinted with permission from AAAS.

This evening at 7 pm ET, Bill Nye the Science Guy will debate creationist leader Ken Ham at the Creation Museum in Kentucky. Tickets to the event sold out in just two minutes, according to the museum (though you can watch live here). So how will Nye fare in this lion’s den? The evidence for evolution is overwhelming, but debating it successfully against a creationist armed with “facts” of his own is another matter. It’s about style as much as substance, and Nye, an entertainer, may fare better than an average scientist in this regard.

We don’t know how Nye will argue his case. But if you want to clinch the argument for evolution with one compelling piece of evidence—and with one single image—you (and Nye) probably want to choose the one above. Here’s why.

For more on why our brains resist science, see “7 Reasons Why It’s Easier for Humans to Believe in God Than Evolution,” by Chris Mooney.

According to many experts, including famed evolutionary biologist Richard Dawkins, the most powerful evidence of evolution lies in the genetic code. Simply put, evolution predicts that organisms that are more closely related to one another will have more of their DNA in common. We can now sequence the genomes of different species and prove that this is indeed the case. Thus, humans share more DNA with chimpanzees than with gorillas, more DNA with gorillas than with rhesus monkeys, and so on.

When it comes to DNA, comparing the chromosomes of humans with those of closely related ape species provides particularly stunning evidence of evolution. That brings us to the image above, which was originally published in a landmark paper in the journal Science in 1982. What you are looking at are highly magnified photographs of the chromosomes of humans, chimpanzees, gorillas, and orangutans, aligned in that order for each chromosome.

Displayed in this way, the most striking thing about the four genomes is how remarkably similar they are; in the parlance of the Science paper, they show “extensive homology.” But they’re not perfectly similar. Humans have 23 chromosome pairs in each of their cells (only one member of each pair is shown above). The other three apes, by contrast, have 24 chromosome pairs. So if we’re really close cousins, evolution has a puzzle to explain: How did we end up with one fewer chromosome pair than they have?

As it turns out, modern genetic science has answered that question flawlessly. In the image above, notice chromosome 2. You’ll see that in chimpanzees, gorillas, and orangutans, there are actually two smaller chromosomes here (the Science paper called them 2p and 2q), but in humans there is just one: 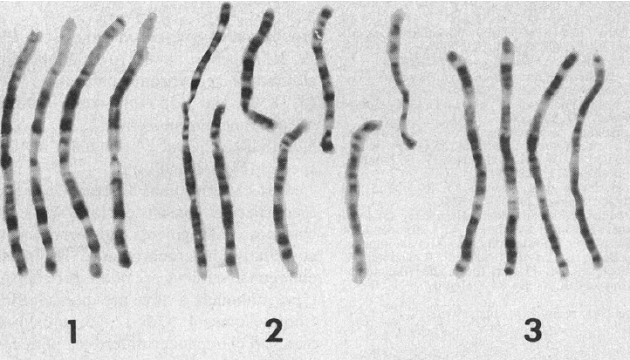 Chromosomes 1-3 in humans, chimpanzees, gorillas, and orangutans. From Yunis & Prakash, Science, 1982. Reprinted with permission from AAAS.

And maybe you can already see where this is going: That’s because the ancestral equivalents of chromosomes 2p and 2q fused together over the course of evolution and became human chromosome 2. In other words, this is sort of the genetic version of the missing link.

How do we know that this fusion occurred? The proof is written, indelibly, in the genetic material itself.

Chromosomes have multiple different regions, including two “telomeres,” structures at the end of each chromosome that contain repetitive DNA and serve as a protective “cap,” and one centromere, a region that binds together chromosome pairs during cell division. So if the ancestral equivalents of chromosomes 2p and 2q fused together, end to end, to become human chromosome 2, then there should be genetic proof of this evolutionary event. More specifically, that chromosome should be a bit odd: It should have telomere DNA in its middle as well as on its ends, and two centromeres (or at least, their genetic remnants), rather than one. Here’s a highly simplified visualization of this fusion process, courtesy of Brown University biologist Kenneth Miller: 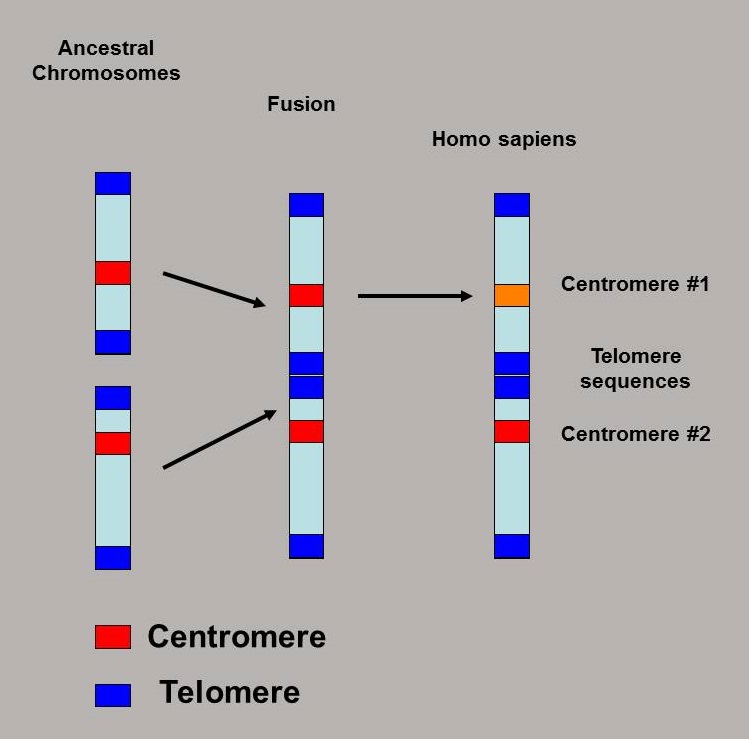 So does human chromosome 2 have the telltale DNA evidence of a fusion event? Yes, it does.

The authors of the 1982 Science paper had no hesitancy in declaring that “the telomeric fusion of chromosomes 2p and 2q accounts for the reduction of the 24 pairs of chromosomes of the great apes to 23 in modern man.” But they could not confirm this with the high-powered techniques of modern genetics.

In a 2005 study published in Nature, however, the “precise fusion site” was located on human chromosome 2. The paper noted the presence of “multiple subtelomeric duplications” in this location (i.e., the expected telomere DNA) and also the vestiges of a second centromere on the chromosome that has since been “inactivated” (represented by the orange region above). In a 2012 study, meanwhile, an international team of scientists published a more detailed evolutionary account of how modern-day versions of human, chimpanzee, and gorilla chromosomes attained their current form. (For an easy-to-understand explanation of what they found, see here.)

In other words, the genetic evidence is precisely what you would expect to see if evolution is true. And that speaks volumes about the power of the theory to explain what we actually observe in the natural world.

“Evolution makes testable predictions,” observes Brown’s Miller, who has been a leading defender of evolution, and whose testimony about chromosome 2 played a prominent role in the 2005 Dover, Pennsylvania, trial over the legality of teaching “intelligent design” in public schools. When it comes to chromosomes, Miller explains, the prediction of evolution is that if we have 46 chromosomes and our closest cousins have 48, then “somewhere in our genome should be a chromosome formed by a recent fusion, and that chromosome should have telomere DNA, and it should have two centromeres. That is a prediction made by evolution, and bingo, you look and there it is.”

Here’s a popular YouTube video of Miller explaining all of this in more detail:

Because the evidence about human chromosome 2 and its evolutionary origins is so striking, it has naturally become a major target for attempted creationist refutations. “People are so bothered by this,” remarks Miller.

Indeed, in a journal published by Answers in Genesis, Ken Ham’s organization, there’s a lengthy and wonky attempted rebuttal by a creationist geneticist named Jeffrey Tomkins. Tomkins naturally finds all kinds of supposed problems with the genetic evidence; perhaps his biggest claim is that at the alleged site on human chromosome 2 where the fusion occurred, there’s actually a functioning gene, rather than the remnants of fused telomeres. “The alleged fusion site is not a degenerate fusion sequence but is and, since creation, has been a functional feature in an important gene,” Tomkins writes at another creationist site, the Institute for Creation Research.

But that’s just wrong, according to Miller. The fusion site is “more than 1,300 bases away from the gene,” he says, based on a review of major gene databanks. “These increasingly desperate efforts to ‘debunk’ the chromosome 2 story have failed before, and they’ve failed this time, too,” Miller concludes. “Once again, we can see that the story of human evolution is written not only in the language of bones and fossils, but in the far more eloquent script of the human genome.”