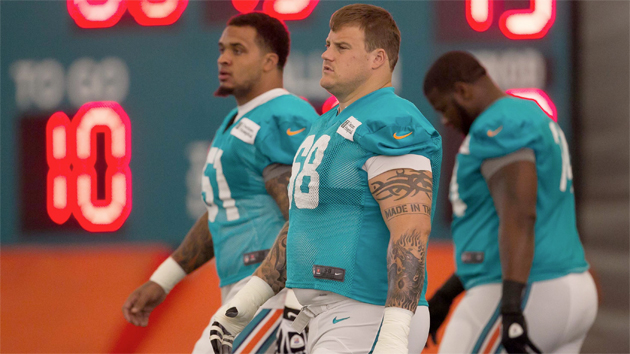 From left: Dolphins linemen Mike Pouncey, Richie Incognito, and John Jerry. While Incognito was identified as a bullying leader, all three took part, according to the report.Allen Eyestone/The Palm Beach Post/ZUMA

In November, after Miami Dolphins offensive lineman Jonathan Martin left the team due to bullying from teammate Richie Incognito, the NFL commissioned an independent investigation to look into the matter. The results of that investigation, released today, reveal a pattern of racist, homophobic, and generally awful instances of harassment that took place inside and outside the Dolphins’ locker room. Read the lowlights—which are vulgar and graphic—below.

Incognito and others taunt and harass an Asian American trainer (page 22):

Incognito, Jerry and Pouncey admitted that they directed racially derogatory words toward him, including “Jap” and “Chinaman.” At times, according to Martin, they referred to the Assistant Trainer as a “dirty communist” or a “North Korean,” made demands such as “give me some water you fucking chink,” spoke to him in a phony, mocking Asian accent, including asking for “rubby rubby sucky sucky,” and called his mother a “rub and tug masseuse.” Martin and others informed us that Incognito and Jerry taunted the Assistant Trainer with jokes about having sex with his girlfriend. Incognito admitted that these types of comments were made to the Assistant Trainer.

Player B: Especially if u plan living in Arizona in the future, that’s exactly what you want

Incognito: Yea. For picking off zombies

Player B: Lol isn’t that why we own any weapons!?

Incognito: That and black people

Incognito and others, including a coach, engage in homophobic taunting (page 19):

Incognito and others acknowledged that Player A was routinely touched by Incognito, Jerry and Pouncey in a mockingly suggestive manner, including on his rear end, while being taunted about his supposed homosexuality. Incognito specifically admitted that he would grab Player A and ask for a hug as part of this “joke.”

The evidence shows that [offensive line coach Jim Turner] overheard and participated in this behavior toward Player A. During the 2012 Christmas season, Coach Turner gave all of the offensive linemen gift bags that included a variety of stocking stuffers. In each gift bag except for Player A’s, Turner included a female “blow-up” doll; Player A’s bag included a male doll.

Incognito tries to get teammates to get rid of evidence—a “fine book” that lists financial penalties for offenses like wearing “ugly ass shoes” or being a “pussy” (page 42):

“They’re trying to suspend me Please destroy the fine book first thing in the morning.”

Martin tells his parents about the taunting and his struggles with depression (page 15):

“I care about my legacy as a professional athlete. But I’m miserable currently. A therapist & medication won’t help me gain the respect of my teammates. I really don’t know what to do Mom.”

“People call me a Nigger to my face. Happened 2 days ago. And I laughed it off. Because I am too nice of a person. They say terrible things about my sister. I don’t do anything. I suppose it’s white private school conditioning, turning the other cheek”

Martin texts a friend with the pros and cons of continuing to play football (page 112):

-I have a legacy that will live after I die

-not many people get to live their childhood dream

-I am the left tackle for the Miami dolphins

-if I quit, I’ll be known as a quitter for the rest of my life

-my legacy at Stanford will be tarnished

-I hate going in everyday.

-I already have a lot of money. I could travel the world, get my degree. Then get a real job

-I could lose 70 lbs and feel good about my body

-I won’t die from CTE

-I don’t need to live lavishly. I could live very frugally

-why do I care about these people? All I need is my family