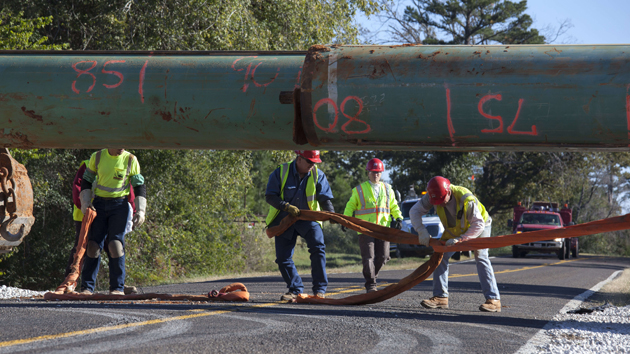 Construction workers piece together the southern portion of the Keystone XL pipeline in Texas. Jim West/ZUMAPress

Opponents of the Keystone XL pipeline were dealt another blow Wednesday evening with the release of a long-awaited report from the State Department’s internal oversight office on a potential conflict of interest in the Department’s environmental review of the project. The report found that even though employees of the contractor hired to carry out the review had previously consulted for the company pushing the pipeline, the information they provided to the Department was “not misleading.”

Moreover, the report found that State Department officials had followed protocol for objectively selecting a contractor, even taking steps that are above and beyond what is officially called for. For example, a six-person panel conducted in-person interviews with each contractor applying for the job.

Last night’s report, issued by the State Department Office of Inspector General (OIG), comes on the heels of the environmental review in question, which found that oil in the Canadian tar sands region would likely be exploited with or without Keystone XL. That was unwelcome news for the project’s opponents, since President Obama, in his major climate change speech last summer, said his administration would approve the pipeline only if it wouldn’t lead to a significant increase in carbon emissions. If rail, trucks, and other pipelines could transport the oil anyway, it’s more likely the Obama administration will give a green light to the project. Last week, the editor of the prestigious journal Science (who previously served as the head of the US Geological Survey under Obama) made that argument in a surprise endorsement of the pipeline. A final decision could come this spring, but that is far from guaranteed.

The conflict-of-interest controversy dates back to November 2011, when the OIG began to investigate claims that TransCanada, the company behind Keystone XL, had improperly influenced the selection of a contractor to write an early environmental impact statement. No impropriety was found, but OIG made recommendations to improve the selection process. The next year, for a second environmental review called for by the president, State hired a new contractor: Environmental Resources Management. ERM’s review was released in March 2013, and it was roundly criticized for being soft on the pipeline’s potential harms, particularly downplaying the climate impact. Another major problem, as Mother Jones first reported, was that the publicly released biographies of the statement’s authors, who were employees of ERM, had been redacted, concealing extensive ties to the fossil fuel industry, including work directly with TransCanada. Another OIG investigation was opened up, leading to the report released yesterday.

Specifically, OIG’s review found the following: (i) ERM had fully disclosed the prior work histories of its team members as part of its proposal; (ii) L/OES attorneys had reviewed and researched the nature of the prior work and had discussed the prior work with ERM in the pre-selection interview; (iii) L/OES attorneys had determined that the prior TransCanada work occurred before the staff began work at ERM and that none of the the prior work had involved Keystone XL; (iv) the Department’s prescribed conflict of interest guidance provides four factual scenarios that may create impairments to objectivity; (v) the employees’ prior work histories did not involve any of those four scenarios; (vi) this prior work had not impaired ERM’s objectivity; (vii) the totality of information provided by ERM to the Department was not misleading; and (viii) the Department’s conflict of interest guidance is consistent with pertinent regulations and case law.

Still, the report calls for further improvements to be made to how the contractor selection process is documented, saying that Department “did not fully document its process,” including details on how officials weighed potential conflicts of interest at ERM before selecting them.

The fact that State followed its own selection procedures doesn’t change the fact those procedures are critically flawed, Congressman Raúl Grijalva (D-Ariz.) said in a statement this morning. Grijalva has been one of the most vocal critics of the State Department’s handling of the Keystone environmental review; earlier this week he asked the Government Accountability Office, the investigative arm of Congress, to look into State’s methodology for conducting reviews like this.

The OIG report, he said, was “overly narrow and doesn’t inspire me with confidence.”