On September 10, 2014, the eighth World Congress of Families will open in Moscow. An international contingent of conservative activists will gather at the Kremlin to swap tactics and strategies while celebrating Russia’s recent successes in pushing anti-gay and anti-abortion laws. The people pictured below are all helping to put on this event as members of the WCF 2014 planning committee. (There are others on the committee who are not featured.)

This past October, the group met at Moscow’s Crowne Plaza hotel to hash out the details of the upcoming three-day affair, which organizers hope will draw upwards of 5000 attendees. But the bulk of these committee members were already deeply connected before they kicked off their planning this fall through ties forged while advancing anti-gay sentiment and legislation in Russia. You can read more about the links pictured below the image. 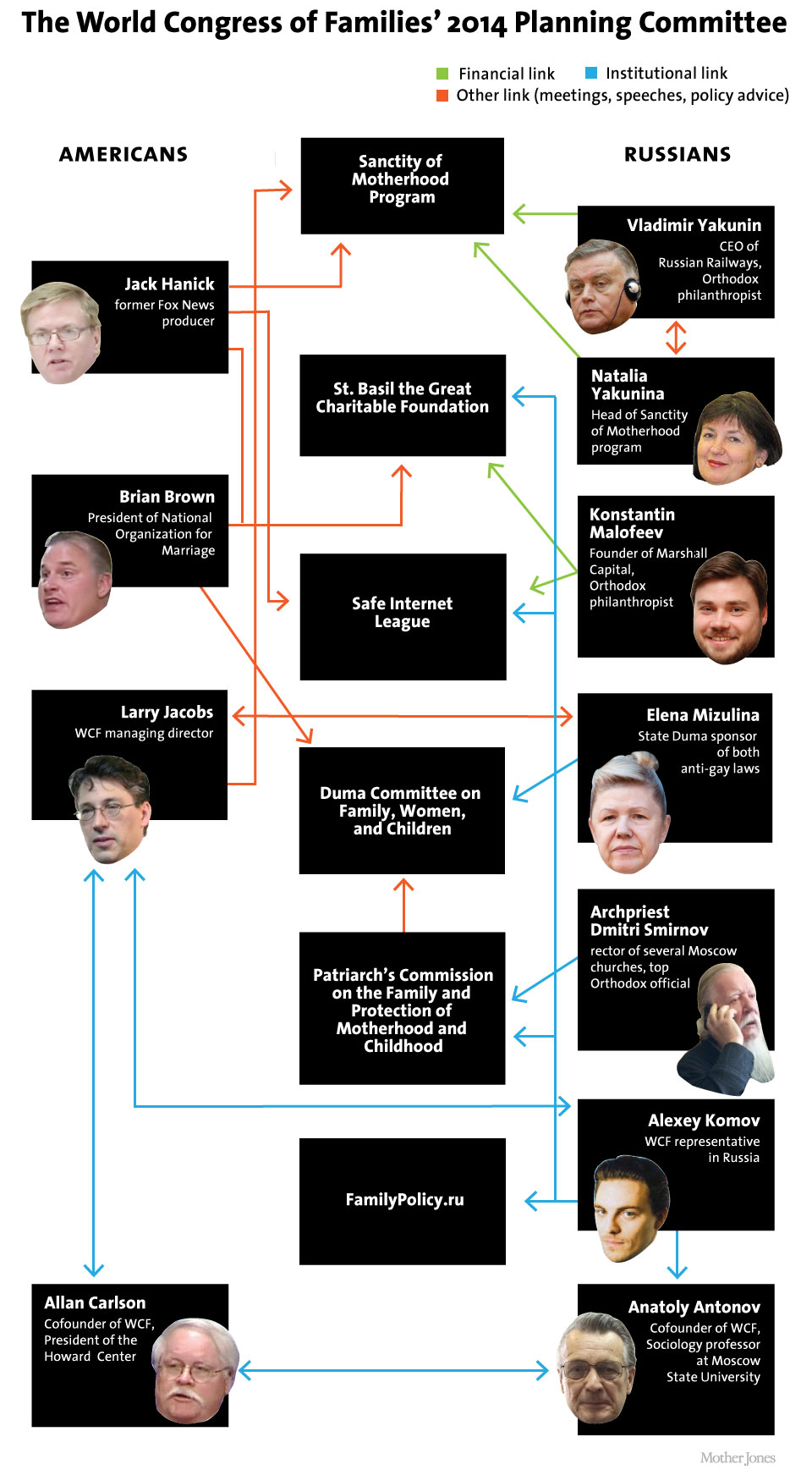 Jack Hanick: The former Fox News producer spoke at the third Sanctity of Motherhood conference this past November. He also spoke at a WCF regional event hosted by Malofeev’s Safe Internet League and at a traditional values roundtable hosted this past June by Malofeev’s St. Basil charity. Brian Brown and the Duma’s Elena Mizulina were also in attendance, and gay marriage was a primary discussion topic.

Brian Brown: The president of the National Organization for Marriage, Brown also spoke at the June roundtable hosted by Malofeev’s St. Basil charity. Earlier that day, he spoke with Elena Mizulina’s Duma committee on family policy about adoption by gay couples.

Larry Jacobs: As WCF managing director, Jacobs works with Allan Carlson at the Howard Center, which runs the WCF. He is also a partner at Komov’s Integrity Consulting, and spoke at annual conferences hosted by Yakunina’s Sanctity of Motherhood group in 2010 and 2013.

Allan Carlson: A prolific historian and family scholar, Carlson is the president of the Howard Center for Family, Religion, and Society. He helped hatch the idea for the WCF in 1995 with Professor Anatoly Antonov. He is Jacobs’ colleague.

Vladimir Yakunin: Married to Natalia Yakunina, he helps fund her Sanctity of Motherhood program through several of his charities, including the Center for National Glory and the Foundation of St. Andrew the First-Called.

Natalia Yakunina: Married to Vladimir Yakunin and heads the Sanctity of Motherhood program.

Elena Mizulina: A member of the State Duma, Russia’s lower house of parliament, she also heads its committee on family policy. Mizulina sponsored both anti-gay laws—the propaganda and adoption bans—that passed in the summer of 2013. According to WCF’s Larry Jacobs, he and Mizulina have met at least three times in Russia. Two days after the propaganda law passed the Duma, Brian Brown met with Mizulina and her committee to discuss legislation about adoption by gay couples.

Archpriest Dmitri Smirnov: A top Orthodox official, Archpriest Dmitri was appointed to head the Patriarch’s commission on the family this past March. He describes the group as a family policy-development shop for the administration that often advises Mizulina’s Duma committee. Alexey Komov is the executive secretary of this commission.

Alexey Komov: The WCF’s official Russia representative, Komov heads FamilyPolicy.ru, a WCF Russian partner. He works with several other Orthodox groups, including Smirnov’s Patriarch’s commission (where he is executive secretary), Malofeev’s Safe Internet League (where he is on the board), and Malofeev’s St. Basil foundation (where he runs a charity). Komov is also the founding partner of Integrity Consulting, a management consulting firm.

Anatoly Antonov: A renowned demographer, Antonov is a professor in the sociology department at Moscow State University. He helped hatch the idea for the WCF in Moscow with Allan Carlson in 1995. Komov is working toward a PhD in the department, and Antonov is his dissertation adviser.