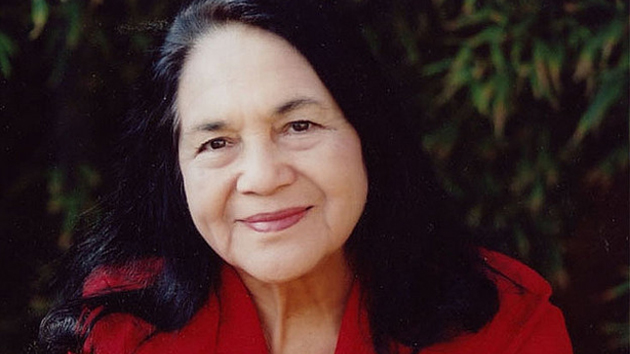 March 31 is Cesar Chavez’s birthday and a national holiday honoring his pioneering activism (which is the subject of a new feature film) around farm-workers rights. He is perhaps best known as a founder of the National Farm Workers Association (NFWA), now the United Farm Workers, a labor union. His cofounder Dolores Huerta, though still alive, is not nearly as well known. So who is she? Born in 1930 and raised in Stockton, California, Huerta, who is portrayed by Rosario Dawson in the Chavez film, has been arrested more than 20 times during peaceful protests, and is still out on the front lines taking part in civil rights actions. Here are five things you should know about her.

1. She’s the mother of the farm-workers movement.
After quitting her teaching job in 1955, Huerta helped register people to vote and became an organizer in the Community Service Organization, a Mexican-American association in California where Cesar Chavez was the statewide director. The pair eventually branched off, in 1962, to found the NFWA, and the rest is history.

2. She was instrumental in winning key protections for workers.
Only a year after launching the NFWA, Huerta secured disability insurance for California farm workers, and was central in the creation of the Aid for Dependent Families, a federal assistance program that stayed in effect until 1996.

3. She led a historic boycott against the grape industry.
In 1965, a group of Filipino workers went on strike for better working conditions, a cause that became known as the “Delano Grape Strike.” Huerta suggested to Chavez that the National Farm Workers Association boycott all California table grapes in support of Filipino workers. In 1970, the grape industry signed an agreement that increased wages and improved working conditions.

4. She originated the phrase, “Si se puede.”
Translated as “Yes we can,” this expression should be familiar to anyone who’s ever attended a labor protest in California. Although it is often misattributed to Chavez, Huerta told Makers that she came up with it. “It’s important for women to be able to take credit for the work that they do,” she said.

5. She helped put Latinas in power.
After a life-threatening assault by a police officer at a protest rally when she was 58, Huerta took a leave from the union to focus on the women’s movement. She campaigned across the country for two years as part of the Feminist Majority’s project to encourage Latinas to run for office. According to Huerta’s website, it had a significant affect on the number of women in government.

So, Happy Cesar Chavez Day, and don’t forget to give Huerta her due! Here’s a trailer for the film: