Upset viewers of Animal Planet are venting on social media after Mother Jones uncovered photographic evidence of animal mistreatment behind the scenes of the TV network’s hit show, Call of the Wildman.

Every garden-variety item that the network has posted on its Facebook page since our investigation published on Monday—the rescue of a baby moose, the birth of an endangered kakapo, photos of “15 puppies so precious you’ll forget your own name“—has been flooded with comments about the much sadder coyote photo included in our report, which reveals the animal confined to a cramped trap three days before a film shoot in which the animal handler and Wildman star known as Turtleman planned to “capture” it by hand.

Under the baby moose post—which asks Animal Planet followers, “Who doesn’t love a happy ending, especially when it involves an animal as cute as this one?”—D’Shannon Llewellyn writes: “We all love happy endings but more so when they aren’t staged and involve abuse and stress that is intentionally inflicted on the animal for the financial profit of your tv station. #CalloftheWildman Staged, Abusive, and certainly not animal loving.”

Rona Seltzer posted a message echoed by other commenters, writing that she has now “stopped watching/supporting animal planet due to so many stories about abuse on some of their shows.”

“The images and investigation coming out of that show are absolutely disgusting,” wrote Ryan M Simmons. “It’s 2014, not 1814. The short lived days of glamorizing white trash who have no regards for the well being of animals have passed.” 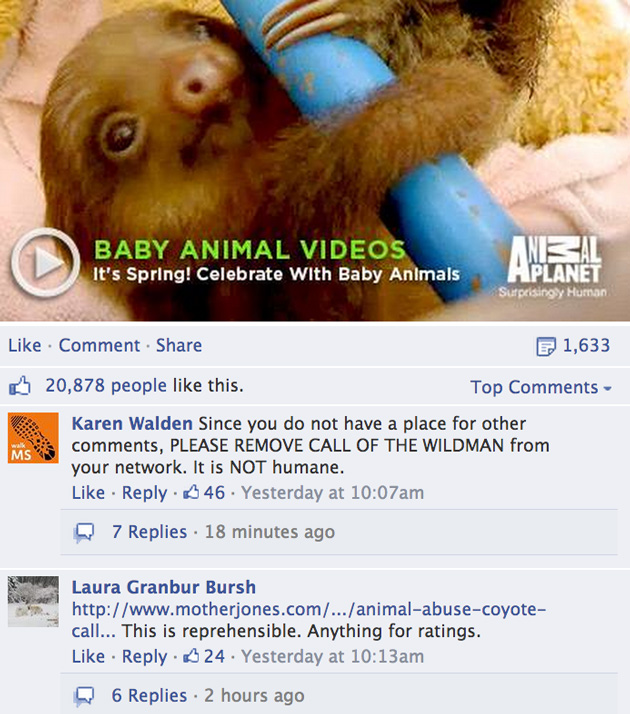 Amid a lengthy thread on the Facebook page of Animal Place, a sanctuary for farmed animals in California, Barb Ruguone summarizes a theme pointed out by multiple commenters: “You’d think that a channel named Animal Planet would be working for the humane treatment of animals and education and not contribute to their abuse. I was so sad to learn of their part in abuse.”

There has been a similar outpouring on Twitter. Michael McIntyre ‏(@FeverCityStudio) summed up the mood this way:

@MotherJones @AnimalPlanet That’s appalling! I’m in tears looking at this beautiful animal suffering at the hands of a “reality” TV show!

@MotherJones @AnimalPlanet The moral of the story is that everyone needs to stop watching faked “nature” shows, as I did long ago.

@MotherJones Seeing the pic, I can’t read further. Like History and Discovery Channels, @AnimalPlanet has become an appalling mess.

@AnimalPlanet @MotherJones Coyote in cage disgusts me. Won’t be tuning it to your channel again.

@AnimalPlanet Perhaps its time to reexamine your shows and who makes them. http://t.co/VToYXVxkt4

Meanwhile, on Turtleman’s own Facebook page, fans either seem unaware of the revelations or they are sticking by their guy: 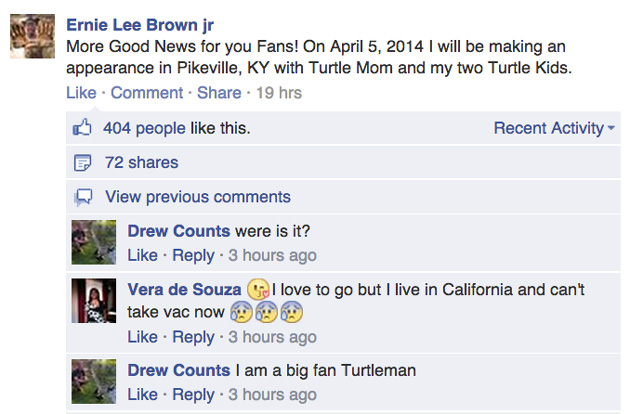