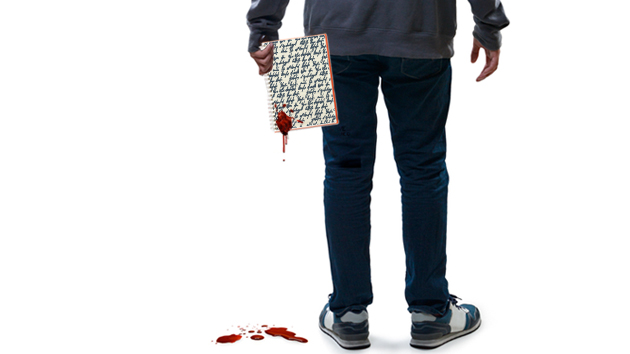 Next month, the Supreme Court of New Jersey will hear arguments about whether rap lyrics written by a defendant are fair game in criminal proceedings—in a case that advocates say could have major First Amendment implications.

In 2008, a New Jersey jury convicted Vonte Skinner of the attempted murder of his associate Lamont Peterson, who was left partially paralyzed after being shot multiple times at close range. During the trial, the prosecutor was permitted to read 13 pages of violent rap lyrics written by Skinner. These lyrics were found in the backseat of his girlfriend’s car at the time of his arrest, and they were written between two months and four years before the crime. None of his raps relate to the particular shooting for which he was convicted, and there was no indication that any of the acts described in the lyrics ever occurred. Prosecutors argued that the lyrics, which depict gun violence in gory detail, showed motive and intent. An appellate court overturned the conviction in 2012, noting that there was no justification for using the lyrics in the case and that there was “significant doubt” that Skinner would have been convicted otherwise. Now it’s up to the state’s highest court to decide.

“We’re arguing to the New Jersey Supreme Court that it needs to provide guidance to the courts in New Jersey that this is artistic and political expression and you need to do a more searching review when you’re seeking to use this kind of expression against someone,” says Jeanne LoCicero, Deputy Legal Director of the ACLU of New Jersey (ACLU-NJ), which filed an amicus brief in support of the defendant. She says there must be a direct link between the artistic expression and the crime (as opposed to a description of violent acts with no relation to the crime) for such material to be cited during a trial, and that rap lyrics should be treated with the same protections as other artistic expressions and social and political commentary.

“That a rap artist wrote lyrics seemingly embracing the world of violence is no more reason to ascribe to him a motive and intent to commit violent acts than to saddle Dostoevsky with Raskolnikov’s motives or to indict Johnny Cash for having ‘shot a man in Reno just to watch him die,'” ACLU-NJ attorneys wrote in the brief. (The Burlington County prosecutors office, which is arguing for the state, declined to comment.)

The introduction of rap lyrics in Skinner’s case is not unique. Experts say that it’s common for prosecutors to use wannabe rappers’ lyrics against them in criminal proceedings, leaving the songs up to interpretation by people with little knowledge or understanding of the art form.

An ACLU-NJ study completed last year found 18 cases around the country in which prosecutors tried to cite rap lyrics as evidence. Prosecutors won the argument most of the time. In 14 of the cases ACLU-NJ examined, defendants’ rap lyrics were admitted into evidence. But the use of rap lyrics in criminal proceedings isn’t limited to the 14 examples ACLU-NJ dug up, says Erik Nielson, a professor at the University of Richmond who studies rap lyrics and criminal proceedings and who has served as an expert witness for defendants in these cases. “We know they’re also being used in less formal ways,” he explains. “Perhaps a prosecutor may be using rap lyrics as leverage to compel somebody to take a plea agreement or something like that. It’s really difficult to get a sense of it. My guess is that we’re looking in the hundreds.”

Defense attorneys fight like crazy to keep their defendants’ lyrics out of court because they know that rap lyrics can be “devastating” to a defense, Nielson says. But defense attorneys usually lose the argument. “The problem is that prosecutors are able to capitalize on the ignorance and perhaps even preconceived notions of judges,” he says. “They’re able to convince them that unlike any other fictional form out there, this can be presented as legitimate evidence either of confession or of somebody’s motive or intent.”

In his memoir Decoded, hip-hop star Jay-Z wrote, “The art of rap is deceptive. It seems so straightforward and personal and real that people read it completely literally, as raw testimony or autobiography.” As Nielson and his research partner Charis Kubrin note in their paper, “Rap on Trial,” “If rap lyrics are treated as mere diaries or journals, no special skill or training is necessary to analyze them, and consequently juries may hear false or misleading testimony about rap from witnesses…who lack the basic qualifications to offer it.”

Judges and juries across the country are unable to see these amateur rap lyrics as the young men writing them see them, says Nielson—as fictional work imbued with social and political commentary, and a possible pathway into an industry with a number of legitimate job opportunities. Instead, the often-reprehensible lyrics serve only to affirm stereotypes about the pathology of young black or Latino defendants.

“When you put the lyrics in front of the jury or even worse when you play a video for the jury, you present the jury with an image of some sort of remorseless vicious thug,” he says, noting that it’s common for young men of color to write rhymes and aspire to become rappers. “What you don’t see is that same kid in glasses sitting at his desk with crumpled paper all around, who has just spent hours trying to write just one of the lyrics that’s in one of the dozens of notebooks that he has.”

Some First Amendment advocates contend that using rap lyrics in court is a slippery slope to eroding the overall protections given to all types of artistic work and social commentary. Nielson doesn’t buy that. He points to a 1996 study by researcher Carrie Fried, who took violent song lyrics and told one group they were from a country song, one group they were from a folk song, and one group they were from a rap song. The group that thought they were looking at rap lyrics found the song to be more offensive and a greater threat to society than the folk and country groups. The study is old, but the stereotypes remain. “I’m just not convinced that using traditionally white forms, for example country music, or using novels against white authors would work,” Nielson says. “There is something about rap music that gives it this special treatment. It’s been negated as an art form.”

It’s obvious to Nielson that rap gets this special treatment because it’s part of a larger problem. “It’s hard to divorce these conversations from the fact that the justice system has proven itself to be incredibly good at finding ways to lock up young men of color,” he says. “It’s not just about society’s antipathy toward hip hop. It’s about society’s antipathy toward young black and brown men.”