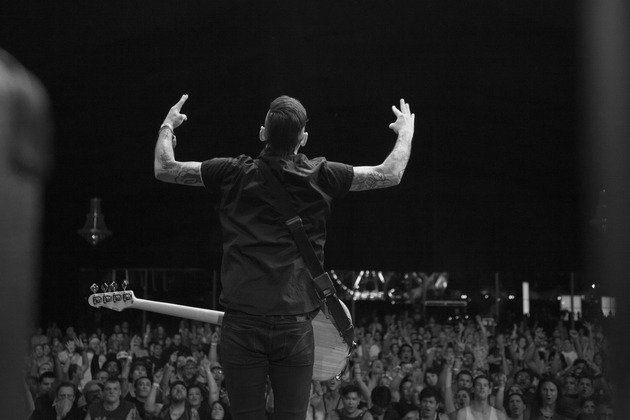 The sun had set on the first day of Coachella. Bright, colored lights adorning art installations and beaming from stages highlighted the plumes of smoke and dust clouds emitting from audiences at the Indio Fairgrounds. I hurried through the sweaty shoulders clustered in front of the main stage, excited to see a band that played a big part in my musical upbringing.

Anti-Flag, which celebrated 20-years of punk rock in 2013, was set to play one of the smaller stages Friday, April 11, at midnight in the Gobi tent. The Coachella Valley Arts and Music Festival has consistently delivered on nostalgia, bringing out new artists along with acts audiences know and love. But I wondered what the Anti-Flag crowd would look like.

The festival, which started small in Indio, California, in 1999, has since grown to attract worldwide attention, amenities such as craft beer, gourmet food, and luxury campsites, along with a hefty price-tag (admission runs from $349-$799, not including transportation, housing, food, and a budget for the more nefarious activities commonly considered part of the festival experience).

The aesthetic of the festival’s attendees is often discussed (and criticized) more than the music, and it largely defines the brand and attraction of Coachella. This year, the throngs of festival-goers were styled as expected. Neon tanks blended with short skirts, a scattering of ironic Native American headdresses, and, of course, skin, skin, skin. Dressing for the heat of the desert doesn’t leave much to the imagination.

The hallmark of festival style, however, is a flowered wreath. A bouquet of large blooms wrapped in a crown, these wreaths adorned heads in every direction. Beautiful but cumbersome, their glamor began to wear thin the more often I saw them. They’re worn as a nod to the “free-spirit” identity crafted by music festivals like Coachella, but in reality, they seem limiting. How can you head-bang with flowers in your hair? I didn’t expect to see many of them at the Anti-Flag set that night. 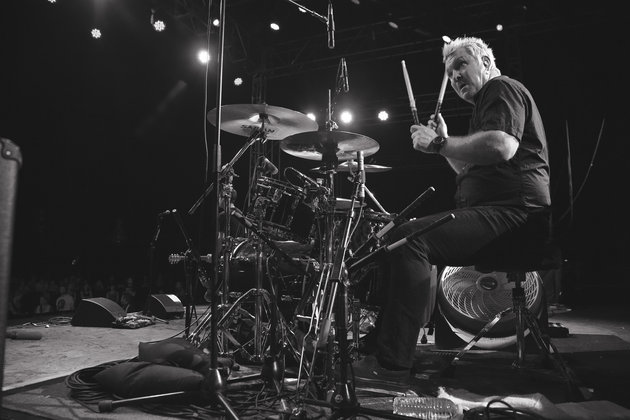 When I spoke to drummer Pat Thetic earlier that the day, he said he wasn’t fazed by the notion that his punk band might be playing to a more eclectic, or at least a smaller audience at Coachella.”There are a lot of people here and they are open to ideas,” he said.”We need to have a voice of dissent in every environment. Whether it is a place like Coachella or a place like Warped Tour or at a local football game—you have to have a voice of dissent.”

Anti-Flag is no stranger to the role. Hailing from Pittsburgh, the band started with a political aim, founded on their town’s history of labor movements. Its two original members, Thetic and lead singer/guitar player Justin Sane, were joined by Chris Head (rhythm guitar, backing vocals) and Chris Barker or “Chris #2” (lead vocals, bass guitar) in the late nineties.

Punk Rock was a venue for voicing their beliefs and rallying others.”We were all trying to say something,” Thetic says. “It did not necessarily mean that we were intelligent and had good things to say, but we were angry and activism and politics were a place to release that anger and frustration.” His words perfectly described how I felt as a high school kid when I first discovered the band and punk rock. I loved the pounding rhythm that paralleled how I felt about the messages in the music.

The band has remained dedicated to highlighting social ills and continues to be involved in important causes. Last year, they partnered with Art For Amnesty, the Amnesty International campaign inspired by the imprisonment of Russian activist punk band Pussy Riot. Their version of “Toast to Freedom” (below), featuring Donots, Ian D’Sa of Billy Talent, and Bernd of Beatsteaks, is just one example of their musical advocacy efforts.

They have raised funds for nonprofits championing an array of issues—from PETA to Planned Parenthood, African Well Fund to the ACLU. Anti-Flag founded Military Free Zone to highlight problems with military recruitment in schools and Underground Action Alliance, a site that brings young activists together.

That’s why when I asked Thetic how music can solve the worlds problems I was surprised to hear him say it can’t.”Music doesn’t change the world by any stretch,” he said adamantly,”but the people who are changing the world are listening.”

I wondered if the people changing the world were even at Coachella. Thetic assured me that they were—even if they didn’t know it yet.”These kids are not being taught about these things but if they come to a festival like this maybe they will stop by and hear an Anti-Flag song,” he explains. “If they are like ‘Who are these guys? Why are they so angry? What are they talking about? Should I be that angry?’ Those ideas can catch hold and spark a fire.”

I reached the Gobi tent right before Anti-Flag was scheduled to play. I looked around at the people trickling in and hoped to see a fire spark. The lights went up. The band took the stage. The crowd grew. The onlookers transformed into a sea of bobbing heads and thrashing arms. Some shouted along. Others just moved to the music.

“Welcome to the most right and righteous circle pit of all Coachella history!” Chris #2 shouted from the stage.”It happens right here, right now. Everyone is running in a circle. If someone falls down we pick them up!” The crowd erupted into organized mayhem—a blur of circular motion cycling through the middle. The moshing continued throughout the set. People kept their phones put away, even when Thetic brought his drum kit into the crowd for the final song.

By the time the band finished it was nearing 1 am. The dust from disbanded festival-goers was settling as workers made the rounds collecting trash left behind.

As I made my way out of the tent I saw it. Crumpled, laying in the dirt near the stage, a flower wreath had been left behind by its wearer. I hoped it had been ripped off in triumph and danced into the ground while its owner was caught in the moment, hearing the message, and truly listening to the music. One can only guess how it landed there, but to me it was a symbol that someone left that night changed—if only in the smallest way.