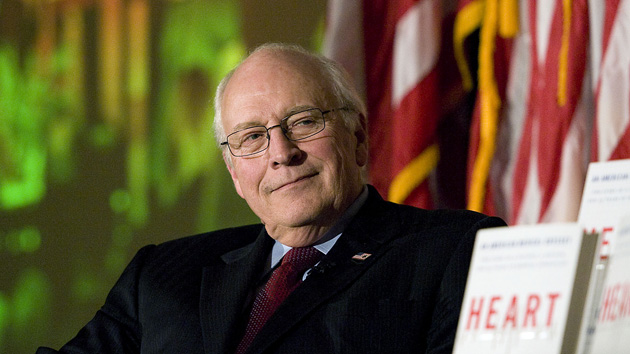 This past weekend, the Republican Jewish Coalition held its spring leadership meeting at Adelson’s Venetian hotel, where several possible 2016 contenders, including ex-Gov. Jeb Bush and current Govs. Chris Christie, Scott Walker, and John Kasich, showed up to kiss the ring of the casino magnate, who’s looking to bankroll a viable Republican presidential candidate. Though the heavy-on-Israel speeches of the White House wannabes were open to the press, the keynote address delivered by Cheney on Saturday night was off-limits to reporters and the public. But Mother Jones has obtained a recording of Cheney’s talk, during which he once again derided President Barack Obama on foreign policy, blasted the isolationists within his own party, assailed critics of the National Security Agency, and seemingly endorsed the idea of an Israeli strike against Iran.

Speaking about the possibility of Iran developing a nuclear weapon, Cheney dismissed Obama’s negotiations with Tehran, and he recalled a dinner meeting he had in 2007 with Israeli General Amos Yadlin. Yadlin had flown in the Israeli Defense Force’s mission in 1981 that destroyed Iraq’s Osirak nuclear reactor, and he was the country’s military intelligence chief in 2007 when the Israel Defense Forces obliterated Syria’s nuclear reactor in the Deir ez-Zor region. Recalling his conversation with Yadlin, Cheney said, “He looked across the table over dinner, and he said, ‘Two down, one to go.’ I knew exactly what he meant.”

“One to go” was an obvious reference to bombing Iran’s nuclear program. The crowd responded approvingly with laughter and applause. (Last October, Adelson publicly proposed that the US drop a nuclear bomb in the Iranian desert to show Tehran what will happen to Iran if it develops nuclear weapons.)

During his behind-closed-doors talk, Cheney took multiple shots at Obama. The former vice president said Obama has been a bust at home and abroad, proving to be a weak commander-in-chief and failing to project strength around the world. “The bottom line is,” Cheney groused, “the United States’ position in [the Middle East] is worse than at any time in my lifetime.” He added, “It’s reached the point where Israel and Egypt, [the United Arab] Emirates, Saudi Arabia, Jordan are closer to one another—imagine that!—than any of them is to us…Nobody who’s been our friend in the past any longer has any sense of trust in we’ll keep our commitments, that we’ll be there in a crisis when they need us. On the other hand, none of our adversaries need fear us.” Noting that the chief responsibility of a president is to protect the United States against “all enemies, foreign and domestic,” Cheney claimed that today that charge “is not being pursued in any kind of coherent manner.”

Cheney devoted much of his speech to defending the National Security Agency and its massive collection programs. There is the belief, he said, “that we have created in the National Security Agency this monster bureaucracy that’s reading everybody’s mail, listening to everybody’s phone calls, infringing upon our civil liberties and civil rights. Hogwash.” He claimed that there has not been a single case of NSA abusing its authority. (Cheney must have missed this and this.) And he asserted that if these programs had been in place, “it probably would’ve allowed us to stop 9/11.” Not surprisingly, he blamed the NSA’s current woes on Obama: “We don’t have a president who can stand up and defend the program. Nobody believes him—for good reason. Look what he did with health care.”

Listen to the audio of Cheney’s speech: