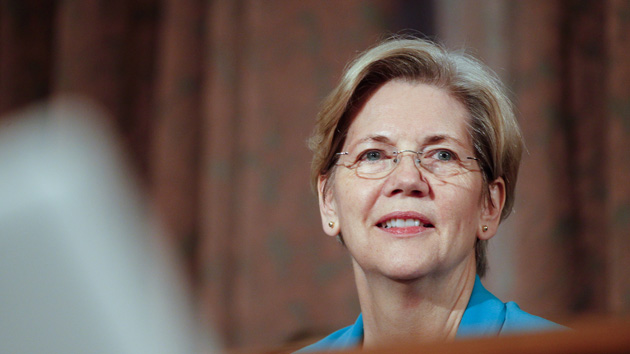 Elizabeth Warren—the senator from Massachusetts, liberal icon, and fundraising machine—has a new book out, A Fighting Chance. It’s a memoir and a brisk read. The book begins with Warren’s hardscrabble youth in Oklahoma City and traces her unlikely rise from twentysomething single mother teaching legal writing part time to Harvard law professor to United States senator. A Fighting Chance has a casual, folksy style—”Daddy had always been handy”; an industry-written bankruptcy reform bill “stunk like a pile of manure”—with a hearty serving of clichés.

A Fighting Chance has every hallmark of a campaign book, the memoir/manifesto not-so-subtly announcing a politician’s aspirations for higher office. Campaign books are usually written with the help of an ideologically friendly columnist or ghostwriter. (In this case, Warren’s daughter and frequent collaborator, Amelia Warren Tyagi, contributed research and moral support.) Like a super-PAC, the campaign book is a box to be checked by up-and-coming pols. In recent years, presidential wannabes such as Govs. Bobby Jindal and Scott Walker and Sens. Rand Paul and Marco Rubio have all “written” one. Hillary Clinton’s new campaign book, Hard Choices, chronicling her tenure as secretary of state, comes out in June, in time for the 2016 campaign. (In a pitch-perfect parody, the writers of HBO’s Veep titled ne’er-do-well VP Selina Meyer’s book Some New Beginnings.)

Yet unlike the aforementioned politicians, Warren says she’s not interested in the presidency. She’s not running, so stop asking. Even after reviews of A Fighting Chance began appearing, she denied any presidential ambitions. Why, then, did she write a campaign book?

The first clue that A Fighting Chance belongs on the same shelf as the tomes of Rubio, Paul, and Jindal appears on the first page, which begins like a campaign ad:

I’m Elizabeth Warren. I’m a wife, a mother, and a grandmother. For nearly all my life, I would have said I’m a teacher, but I guess I really can’t say that anymore. Now I’d have to introduce myself as a United States senator, though I still feel a small jolt of surprise whenever I say that.

Four paragraphs later comes Warren’s cri de coeur, the brief description of what it is that drives her:

Today the game is rigged—rigged to work for those who have money and power. Big corporations hire armies of lobbyists to get billion-dollar loopholes into the tax system and persuade their friends in Congress to support laws that keep the playing field tilted in their favor. Meanwhile, hardworking families are told that they’ll just have to live with smaller dreams for their children.

Rigged was the working title of A Fighting Chance. This should come as no surprise to anyone who’s followed Warren’s ascent. It’s this rigged system that she has worked to fix since first plunging into the murky world of bankruptcy law decades ago as a professor at the University of Texas–Austin. And as a politician, it’s a favorite theme of hers, one she used nonstop during her successful 2012 run for Senate in Massachusetts, including during her star-making prime-time speech at the Democratic National Convention.

Warren’s book can, at times, read like an extended stump speech. The arc of her story won’t be news to her many fans, and she devotes a chapter each to the major acts of her life thus far. She fought to reform the nation’s bankruptcy laws (“The Bankruptcy Wars”); chaired the Congressional Oversight Panel, the chief watchdog for the bank bailouts (“Bailing Out the Wrong People”); launched the new consumer protection agency that she’d previously conceived of; and of course ran for Senate against Republican Scott Brown (“The Battle for the Senate”).

Here and there Warren sprinkles in newsy details—nothing explosive, but juicy enough to feed the Washington media machine. She dishes on her frosty relationship with former Obama economic adviser Larry Summers (“He teed it up this way: I had a choice. I could be an insider or I could be an outsider”). She labels Scott Brown “one of [Wall Street’s] favorite congressmen.” And she takes a shot at Republican political strategist Karl Rove and his dark-money nonprofit, Crossroads GPS. “Since Rove’s donor list was secret, Crossroads GPS didn’t even pretend to be embarrassed if they were caught in a lie,” she writes. “These guys were playing for keeps, and they seemed to be perfectly willing to lie and cheat if that’s what it took to win.” (Notably, as The New Republic‘s Noam Scheiber observes, Warren glosses over her past criticism of another female Democratic star, Hillary Clinton, for her support of an industry-friendly bankruptcy bill in 2001.)

Like any good stump speech, Warren mentions the requisite faceless victims to illustrate her point about the Obama administration’s failure to aid working people in the wake of the financial meltdown. She writes of “Flora,” who lost her home to a mortgage refinancing scammer, and of a Las Vegas man she calls “Mr. Estrada,” who thought he’d renegotiated the terms of his mortgage only to have his house sold out from under him and his family at auction. “Even now, I think about Mr. Estrada and his little girls,” Warren says. “This wasn’t supposed to happen.”

Reading the rousing finale of A Fighting Chance, it’s all too easy to picture Warren delivering the words on a dais in Des Moines or in a gymnasium in Concord. You can hear the sound of the crowd roaring with approval. You can see Warren jab the air as she says:

That sounds an awful lot like a campaign call to arms to me.