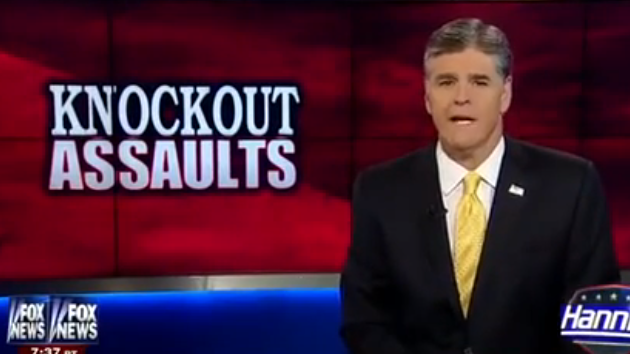 The Connecticut state Legislature’s Judiciary Committee passed a bill last week that would ramp up penalties for people who commit assault as part of the so-called “knockout game.” Reports of black teens randomly punching bystanders and then uploading videos to YouTube sparked a media frenzy last year. After the hype died down, it became clear that there was little law enforcement data to suggest the knockout game is a trend among black teens—or anyone else—and plenty of critics have noted that the obsessive media coverage perpetuates racist tropes. (Remember “wilding” and “headlight flashing”?)

But that hasn’t stopped lawmakers in a number of states this year—including Connecticut, Illinois, New York, Oklahoma, Pennsylvania, South Carolina, and Washington—from trying to pass vague and confusing laws to ban the game (which is already illegal everywhere assault laws exist). “We already have a lot of laws against punching people and attacking people in the street,” notes Laurie Levenson, a law professor at Loyola Law School in Los Angeles. “Some of this legislation just lends itself for endless legal appeals.”

State Rep. Joe Verrengia, a West Hartford Democrat, says he introduced his Connecticut bill to send “a clear message to the thugs who commit this cowardly act.” His legislation makes it a felony—with a minimum two-year sentence—for intending to “cause serious physical injury to another person by rendering such other person unconscious,” doing so “without provocation,” and causing injury by “striking such other person in the head.” (A previous version of the bill said that the injury had to be caused by “a single punch or kick.”)

The New Haven Register reported last fall that there were six alleged knockout-game-style attacks in two days. Breitbart quickly picked up the news. Soon after, Sgt. Al Vazquez of the New Haven Police Department Detective Bureau told the Yale Daily News that the media was perpetuating the trend by continually covering it. Another case in Connecticut that conservative website WND declared an example of the knockout game involved two teenage boys under the influence of drugs who jumped a man, according to local police. The man then allegedly stabbed the boys with a pocket knife, killing one of them.

“I’m not sure we have information indicating that the knockout game, one, was a real problem in this state and, two, is an ongoing problem in this state,” another Democrat, state Sen. Gary Holder-Winfield of New Haven, said at a hearing on the bill. A longtime public defender in Connecticut, “Gideon,” who blogs anonymously for the Connecticut Law Tribune, tells Mother Jones that he sees numerous problems with the bill. “This legislation covers acts that are already exactly covered [and it] says that the intent has to be to render someone unconscious. How do you ever prove that?” He adds, “The legislator who proposed this bill couldn’t point to a single instance of this knockout game. That should give people pause.” (Verrengia did not respond to a request for statistics backing up his legislation.)

A prosecuting attorney testifying for the anti-knockout-game bill in Washington state noted that he had only seen “one or possibly two cases” in Spokane County that would fit the bill’s definition, but feared that “it’s been in the national news lately, and does appear to be…a trend that is spreading.” Five Republican lawmakers sponsored the bill, which passed the state Senate and relevant House committee this year, but failed to get a full House vote before the legislative session ended in March.

The legislation would have made it a felony—punishable by up to five years in prison—to assault a person “randomly without any prior physical or verbal contact in a public place.” Legal experts say that the bill’s use of the term “random” doesn’t make much sense. According to Eugene Volokh, a law professor at UCLA School of Law, “If, for instance, someone decides to attack someone because that person looks old, looks ugly, or seems defenseless, or is present in a place where there aren’t any passers-by who can step in to stop the attack, that wouldn’t be random, yet why would such nonrandom elements make the offense any less serious?”

Volokh also finds a serious problem with the South Carolina bill, introduced by Democratic state Sen. Vincent Sheheen from Camden, who is running for South Carolina governor. Sheheen told WSPA.com that he introduced the bill to stop kids from filming the knockout game and posting it on the internet. The bill makes it a felony to film a violent crime, with exceptions for journalists, accidental recordings, or law enforcement. But Volokh notes that the bill doesn’t protect bystanders who might record a crime on their phones to preserve evidence, so it appears to be “unconstitutional.” The Oklahoma bill also includes a provision banning recording assault, but specifies that it’s illegal only if published “on behalf of the attacker.”

Many of these new bills also specifically target teenagers. The Republican-backed New York bill, for example, makes it so that juveniles will face prison time of up to 25 years if they are convicted of playing the knockout game. The Oklahoma bill would charge juveniles accused of the crime in adult court, and the Connecticut bill would do the same with 16- and 17-year-olds.

Gideon, the Connecticut defender, says, “What you have, essentially, is an assault of some sort, which is elevated to a different status because of what it represents: urban youth (black or Hispanic) attacking innocent white folk. No legislator will admit it, but the undertones are obvious.” He adds, “This is nothing more than pandering to a certain white demographic, and we all ought to be ashamed.”