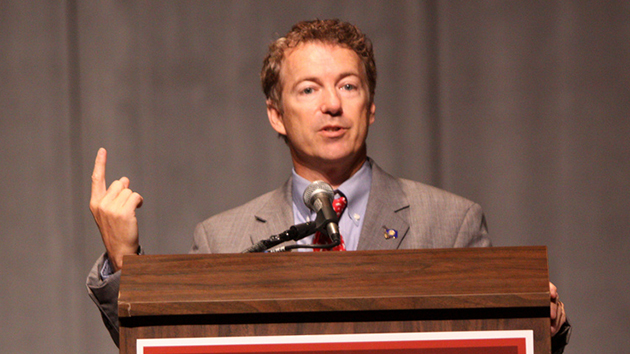 Last week, continuing the sometimes catty intraparty feud between Republican hawks and GOPers skeptical of foreign intervention, former Vice President Dick Cheney took a shot at Sen. Rand Paul (R-Ky.). But Paul is not likely to be fazed by criticism from Cheney, for several years ago the Kentucky senator was pushing the conspiratorial notion that the former VP exploited the horrific 9/11 attacks to lead the nation into war in Iraq in order to benefit Halliburton, the enormous military contractor where Cheney had once been CEO.

Speaking at a private Las Vegas gathering of Republican funders and activists on March 29, Cheney blasted what he termed isolationists within the GOP. “One of the things that concerns me first about the [2016] campaign, that I’m worried about,” Cheney said, “is what I sense to be an increasing strain of isolationism, if I can put it in those terms, in our own party.” He didn’t name names, but he didn’t have to—at least, in one case. He obviously had Rand Paul in mind. And Cheney, who also approvingly talked about bombing Iran, chided the unmentioned Paul and other less hawkish GOPers for having not learned the supposed lessons of 9/11.

Cheney’s remarks were the latest round in the tussle between the Republican Party’s hawks and intervention skeptics. A year ago, Sen. John McCain (R-Ariz.) referred to Paul, Sen. Ted Cruz (R-Texas), Rep. Justin Amash (R-Mich.), and other Republicans unenthusiastic about drone strikes as “wacko birds.”

But years before this dustup began, Paul was on the attack against Cheney. In not widely noticed appearances on the campaign trail, Paul claimed that Cheney’s advocacy of the invasion of Iraq was partly nefarious and predicated on corporate self-interest, not national security priorities.

On April 7, 2009, as Paul was on the cusp of announcing his senatorial bid, he spoke to student Republicans at Western Kentucky University. Recalling President Dwight Eisenhower’s warning about the military-industrial complex, he noted, “We need to be fearful of companies that get so big that they can actually be directing policy.” And the company he had in mind was Cheney’s former home: “When the Iraq War started, Halliburton got a billion-dollar no-bid contract. Some of the stuff has been so shoddy and so sloppy that our soldiers are over there dying in the shower from electrocution. I mean, it shouldn’t be sloppy work; it shouldn’t be bad procurement process. But it really shouldn’t be that these people are so powerful that they direct even policy.”

Paul then indicated to the students that he believed that Cheney had used 9/11 as an excuse to launch the Iraq War to serve Halliburton’s interests.

There’s a great YouTube of Dick Cheney in 1995 defending [President] Bush No. 1 [and the decision not to invade Baghdad in the first Gulf War], and he goes on for about five minutes. He’s being interviewed, I think, by the American Enterprise Institute, and he says it would be a disaster, it would be vastly expensive, it’d be civil war, we would have no exit strategy. He goes on and on for five minutes. Dick Cheney saying it would be a bad idea. And that’s why the first Bush didn’t go into Baghdad. Dick Cheney then goes to work for Halliburton. Makes hundreds of millions of dollars, their CEO. Next thing you know, he’s back in government and it’s a good idea to go into Iraq.

The day after 9/11, [CIA chief] George Tenet is going in the [White] House and [Pentagon adviser] Richard Perle is coming out of the White House. And George Tenet should know more about intelligence than anybody in the world, and the first thing Richard Perle says to him on the way out is, “We’ve got it, now we can go into Iraq.” And George Tenet, who supposedly knows as much intelligence as anybody in the White House says, “Well, don’t we need to know that they have some connection to 9/11?” And, he [Perle] says, “It doesn’t matter.” It became an excuse. 9/11 became an excuse for a war they already wanted in Iraq.

Critics of President George W. Bush and Cheney have long assailed the pair for pushing a WMD-centered case for war that was false and questioned their reasons and motives for invading Iraq. But it’s notable that a member of the Senate who might be a leading contender for the GOP’s 2016 presidential nomination thinks that the most recent Republican vice president snookered the nation into war to boost profits for a company he once steered.

Paul’s dark remarks about Cheney to those college Republicans were not a one-off event. At a Republican rally in Montana during the 2008 presidential campaign when Paul was speaking for his father (who was then running for president), he raised the same points. He told the crowd that there had been “no link” between 9/11 and Iraq and cited this “great YouTube clip that everyone should look up.” He described the video and explained its meaning:

It’s Dick Cheney in 1995* being interviewed on why they didn’t go into Baghdad the first time under the first [President] George Bush. And his arguments are exactly mirroring my dad’s arguments for why we shouldn’t have gone in this time. It would be chaos. There’d be a civil war. There’d be no exit strategy. And cost a blue bloody fortune in both lives and treasure. And this is Dick Cheney saying this. But, you know, a couple hundred million dollars later Dick Cheney earns from Halliburton, he comes back into government. Now Halliburton’s got a billion-dollar no-bid contract in Iraq. You know, you hate to be so cynical that you think some of these corporations are able to influence policy, but I think sometimes they are. Most of the people on these [congressional] committees have a million dollars in their bank account all from different military-industrial contractors. We don’t want our defense to be defined by people who make money off of the weapons.

The message is clear: Cheney, a corporate shill, was more loyal to Halliburton—and the millions of dollars he earned from the company—than to the United States, and he and Halliburton manipulated the country into the Iraq War. Paul was essentially accusing Cheney of a profound betrayal: using 9/11 to start a war to profit Halliburton.

This is a harsh charge—and in these videos, Paul seems to believe it fully. He has, though, not spoken in such terms of late. (His Senate office did not respond to a request for comment.) In a recent speech on foreign policy, Paul talked about the value of “containment” and “engagement” and assailed the Cheney wing of the party—without naming the ex-veep—by decrying neocons for promoting a “neo-isolationism, in which diplomacy is distrusted and war is, if not the first choice, the preferred option.” Yet his previous accusations about Cheney, 9/11, and Iraq could well provide rich material for questions in presidential debates, should Paul run in 2016. The remarks illustrate just how sharp the divide is between Paul and the GOP establishment on foreign policy and suggest the bad blood runs deep, very deep.

Update: A reader alerted us to what may have been the clip of Dick Cheney that Paul referred to. View it here.

Update II: But that clip was dated 1992. Another reader pointed to this clip, which captured a slice of an interview conducted with Cheney at the American Enterprise Institute in 1994, which is closer to the year (1995) Paul cited.