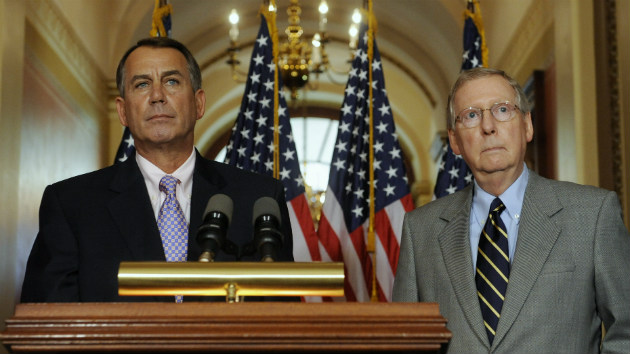 Skim the news nowadays and you’re bound to encounter two political storylines seemingly at odds with each other. They appear side by side in major news outlets; sometimes even in the same headline. In the first storyline, the Republican Party is at war with itself, divided between establishment and tea party, staring down its own demise as the nation’s demographics change and majorities of Americans embrace Democratic positions on gun rights, immigration, marriage equality, and other important issues.

Yet in the second storyline, the GOP is ascendant, poised to grow its majority in the House of Representatives and—more significantly—win back control of the US Senate in the 2014 midterms. Senate Republicans are already planning their majority agenda, divvying up committee chairmanships.

How can this be?

News stories galore have explored one or the other of these narratives, but never reconciled them. Here’s how the Republican Party is on the brink of a meltdown…yet on track to retake Congress in November.

Luck of the Draw
The GOP is on pace for major gains in 2014, in part because of luck. Democrats stand little chance of winning back the House. They would need to erase the GOP’s 17-seat majority, while successfully defending their own members, including 13 incumbents in toss-up races. (RealClearPolitics rates only three House GOP races as toss-ups, which has at least something to do with Republican gerrymandering of congressional districts at the state level.)

The real action this year is on the Senate side. And looking at the 2014 Senate electoral map, this much is clear: Republicans were dealt a good hand. 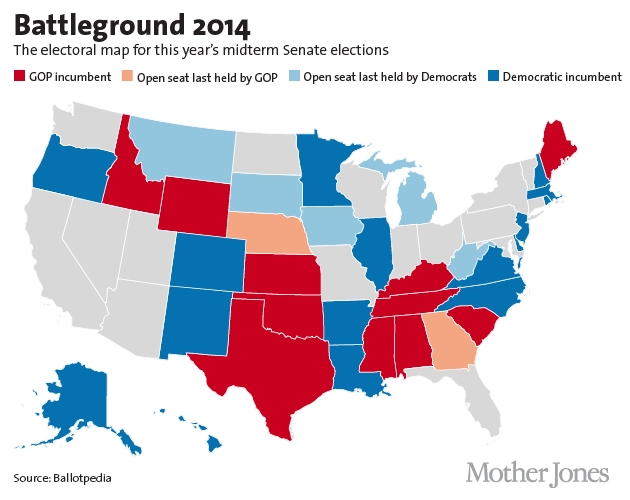 There are 36 Senate seats up for grabs this year, and the GOP needs to pick up 6 of them (while defending those it now controls) to reclaim the majority. Seventeen of those 36 seats are held by Democrats running for reelection, and 4 are open seats once held by Democrats. The Republicans, on the other hand, have 12 Republican incumbents up for reelection and three open races for seats previously held by Republicans. So that’s 21 seats the Democrats must defend to 15 for the Republicans.

With fewer seats to defend, the Republican Party and right-leaning super-PACs and nonprofits have more leeway to invest in advertising and voter mobilization to flip seats now held by the Democrats.

The Obama Factor
President Obama’s popularity is in the tank. At the moment, a paltry 43 percent of Americans say he’s doing a good job; his approval rating hasn’t touched 50 percent since June 2013. Those numbers have a significant effect on his party’s prospects in 2014.

Historically, the performance of the president’s party in midterm elections tracks closely with that president’s own standing. Unpopular Obama? Expect a dismal election cycle for Democrats.

On this subject, we turn to the generic congressional ballot, which pits a hypothetical “Democrat” against a hypothetical “Republican.” FiveThirtyEight‘s Nate Silver calls the generic ballot the “single best measure of the national political environment.” The Democrats need a lead in the generic ballot to minimize their losses this fall. Right now, however, the generic ballot shows Democrats and Republicans in a dead heat—bad news for the Ds. And as FiveThirtyEight‘s Harry Enten recently pointed out, the president’s party almost always loses ground in the general ballot between the spring and fall of a midterm election year. In other words, the already grim outlook for the Democrats will likely worsen by Election Day.

Obama’s sagging approval numbers could neutralize the party’s advantage when it comes to voter turnout and demographics. Young people prefer the Democratic Party to the GOP in huge numbers—in 2012, Obama took 60 percent of the vote among those younger than 30. The same goes for minorities, who turned out in historically high numbers in 2012 and backed the president by huge margins. But this is an off-presidential year, independents are disappointed in Obama’s second term, and excitement is muted among young and minority voters. For all these reasons, it will be harder to mobilize Democratic voters on Election Day.

On the GOP side, the party’s base of older white voters is angry. They’re ticked off about Obamacare, and they’re eager to express their outrage at the ballot box. Even though white voters’ share of the electorate continues to shrink every four years, poor turnout among young people and minorities and high turnout by the GOP’s base spells success for the Republican Party.

“The Sixth-Year Curse”
Don’t blame Obama entirely for the potential Republican takeover of the Senate. History, too, is very much on the GOP’s side.

Young and minority voters have a habit—Obama or not—of skipping midterm elections. As political analyst Ronald Brownstein pointed out, young voters made up 19 percent of all voters in the seven presidential elections between 1984 and 2008. But two years after each of those elections, young voters’ share of the electorate sunk to 13 percent—a big enough drop to put a dent in the Democrats’ chances.

Since 2002, the same has been true of minority voters. “One reason Democrats were routed in 2010,” Brownstein writes, “is that the minority share of the vote dropped 3 full points from its 26 percent level in 2008.”

For a combination of reasons and circumstances—scandals, economic downturns, fragile political coalitions—history does not favor the party of the president during his sixth year in office. In five of the last six second-term midterms, the party in control of the White House lost, on average, six Senate seats and 29 House seats, according to the political analyst Charlie Cook. In fact, no president dating back to the Civil War has picked up Senate seats for his own political party, writes the scholar Colleen Shogan. Only President Bill Clinton in 1998 managed to accomplish the seemingly impossible, breaking even in the Senate and gaining five seats in the House.

So…Do The Democrats Have Any Hope?
A glimmer, maybe. On the House side, Democrats would need another headline-grabbing GOP debacle—a major political scandal, another gridlock-caused shutdown—to see their fortunes rise. It’s happened before: The many overreaches by the Newt Gingrich-led House in the mid-1990s helped the Democrats gain seats in the 1998 midterms. On the Senate side, Democrats are praying for more Todd Akins—that is, gaffe-prone, far-right candidates who, as Akin did in Missouri in 2012, win their primaries and then implode.

That’s not as likely in 2014. The slate of establishment Republicans up for reelection—Sens. Lindsey Graham of South Carolina, Pat Roberts of Kansas, Lamar Alexander of Tennessee, among others—appear to have learned from 2012. They’re taking their primary campaigns seriously by raising boatloads of cash and securing key endorsements. The only Republican incumbent who faces a viable challenger is Sen. Thad Cochran of Mississippi. If the tea party only manages to knock off Cochran, and the rest of the GOP incumbents win their primaries, the odds of another Akin calamity are slim.

What Could 2014 Tell Us About the Future?
The 2014 midterms could worsen the pendulumlike pattern of US elections. In 2008 and 2012, we saw the rise of what some pundits call the “modern Democratic coalition”—young people, minorities, and women. That coalition turned out en masse to elect a Democratic president and Democratic lawmakers. But in off-year elections, youth and minority turnout drops off while a shrinking but fired-up Republican base springs into action to vote out the Democrats.

If this becomes a pattern, as Ronald Brownstein suggests it might, the effect on Congress and policymaking could be disastrous. “The problem,” he writes, “is that these tectonic forces are pushing toward divided government precisely as the parties are displaying ever-less ability to make it work.”