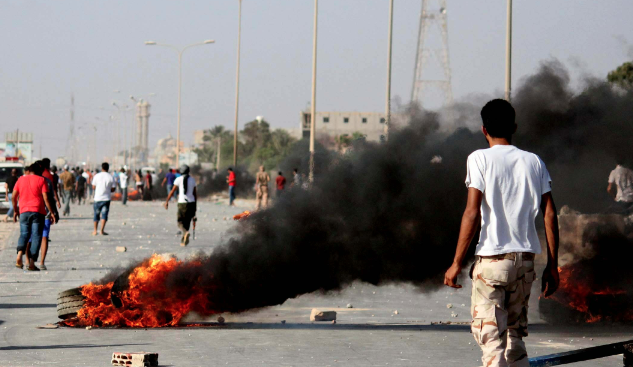 Libyans are seen during fighting outside the office of the Libya Shield pro-government militia in Benghazi, Libya in June 2013. Uncredited/AP

The Obama administration is considering lifting the decades-old ban barring Libyans from coming to the United States to train as pilots and nuclear scientists. But House Republicans are voicing fierce opposition to the proposal, citing one particular reason: Benghazi.

But House Republicans don’t see it that way. At a hearing earlier this month, they equated lifting the ban to aiding terrorists in the region, repeatedly citing the 2012 attack against the US consulate in Benghazi. “Given the desire of radical regimes and terrorists to obtain or build nuclear weapons or dirty bombs, do we want to possibly train Libyan terrorists in nuclear engineering?…It does not appear that national security has been adequately considered in the effort to end the prohibition,” said Rep. Bob Goodlatte (R-Va.). Rep. Trey Gowdy (R-S.C.) noted that “a teacher named Ronnie Smith was murdered in Benghazi. There’ve been no arrests. I’ve heard nothing about it.” When Representative Steve King (R-Iowa) took the floor, he asked nine consecutive questions related to security in Benghazi.

The hearing came in the wake of a letter Goodlatte, Gowdy, Rep. Jason Chaffetz (R-Utah), and Rep. Darrell Issa (R-Calif.) sent to DHS on March 19, calling the proposal “dangerous and irresponsible.” In that letter, House Republicans criticized DHS for continuing to move forward with the proposal without taking their concerns into account.

“The United States supports the aspirations of the Libyan people as they participate in their democratic transition after 42 years of dictatorship,” a DHS official tells Mother Jones. “As part of this effort, we are reviewing US policies that have been in place since before the Libyan revolution to see how they might be updated to better align with US interests.” The official noted that the review is not yet final.

The Reagan Administration implemented the ban in 1983 following a series of terrorist attacks involving Libyan nationals in the late 1970s. The ban, which applies to Libyans who wish to come to the United States for aviation and nuclear training, harkens back to a time when dictator Col. Muammar el-Qaddafi’s nuclear program was still active. In the years following, Libya dismantled its nuclear program, the US lifted its ban on Americans traveling to Libya, and in 2011, Qaddafi met a bloody end following political uprising. The US has now committed to training and equipping the new Libyan national army, with training taking place in Bulgaria, but proposals to train pilots in the US and update the country’s fleet have been stalled by the visa restrictions.

Security experts say that updating Libya’s military is critical to promoting stability in the country. (Earlier this month, the interim prime minister stepped down after there was an armed attack on him and his family.) Frederic Wehrey, a lieutenant colonel in the US Air Force Reserve who served as a military attache in Libya in 2009 and 2011, tells Mother Jones that while the US should proceed carefully in vetting and training Libyan forces, “the notion that they’re going to come here surreptitiously and use the pilot program to wage attacks is vastly exaggerated.” He adds, “It’s quite surprising that the opposition [to lifting the ban] hinges on this notion that Libya is a country of all extremists, whereas the military that the US is engaging with is one of the more pro-US, pro-Western elements in the country.”

Assistant Secretary of Homeland Security for International Affairs Alan Bersin emphasized at the hearing that there are “extra layers of security and vetting” for people who come to the US to work in flight maintenance and nuclear-related fields. He also noted that helping Libyan nuclear scientists get employment that is not hostile to the United States is “in our interest.”

Lawmakers who support lifting the ban say that House Republicans are fixating on Benghazi, without taking into account the complex security concerns in the rest of the country. “When my colleagues on the other side of the aisle nevertheless raise the Benghazi attack as well as other terrorist incidents within Libya as grounds for keeping the visa restriction in place, we must keep in mind that there is a difference between the extremist forces behind these incidents and the pro-Western Libyan military that’s trying to defeat them, and that’s the point of lifting the visa restriction,” Rep. Zoe Lofgren (D-Calif.) said at the hearing.

“The potential lifting of this Qaddafi-era ban would increase our ability to provide security support to the Libyan government and support its border control and counterterrorism efforts—exactly the work we need to do more of post-Benghazi,” an Obama administration official says. “Using what happened in Benghazi to prevent an action that would increase our national security is short sighted and unfortunate.”