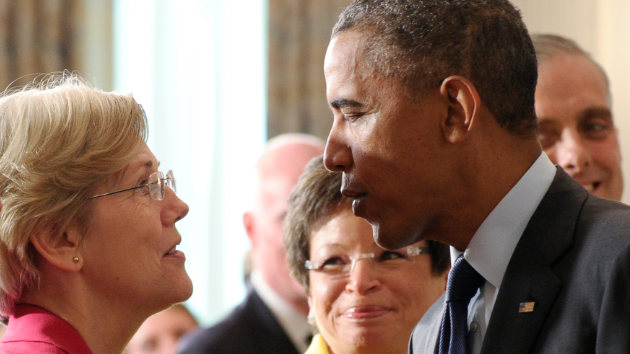 Elizabeth Warren is at it again. On Wednesday, the senator from Massachusetts and her colleague Sen. Jeff Merkley (D-Ore.) called out the Federal Reserve—the US central bank charged with setting monetary policy and regulating big banks—for being too lax on financial reform, and urged the Obama administration to fill two open seats on the Fed’s seven-member board with candidates committed to cracking down on Wall Street.

“As the events of 2008 showed, when the Federal Reserve and other financial regulators failed to engage in appropriate financial regulation, the results were the worst financial crisis in 80 years,” the two senators wrote in a letter to President Barack Obama Wednesday. “Financial regulation and oversight obligations must be front and central to the Board’s work.”

The Fed’s banking watchdog duties include imposing penalties on financial firms for violations such as inadequate money laundering protections and faulty foreclosure practices. Federal Reserve board members also vote on restrictions on CEO pay and rules governing how much emergency capital banks have to keep on their books.

This is not the first time that Warren has pushed the Fed to take its financial regulatory role more seriously. Earlier this year, she called on the heads of the central bank to stop delegating big decisions on bank oversight to staffers. Of the close to 1,000 formal enforcement actions taken by the Federal Reserve over the past decade, only 11 were voted on by the board itself. The rest were delegated to Fed staff, sometimes mid-level employees. In a letter to the Fed in February, Warren contended that the delegation of authority has resulted in bank penalties that are too lenient.

Last September, Warren and fellow Democrats on the Senate banking committee opposed Obama’s plans to nominate former Treasury Secretary Larry Summers to run the Fed, citing Summers’ work on behalf of the banking giant Citigroup and his past efforts to deregulate the financial industry. (Obama ended up withdrawing Summers’ name from consideration.)

And at Fed chair Janet Yellen’s Senate confirmation hearing in November, Warren told Yellen, “I’m concerned that [financial regulatory] responsibilities just aren’t a top priority for the board of governors.”

In addition to the two Fed posts Warren and Merkley are concerned about, there are three other openings on the Fed board for which Obama has already nominated candidates. Those nominees are Lael Brainard, a former Treasury official; Jerome Powell, who has been a Fed board member since 2012 and is up for a second term; and Stanley Fischer, the former head of the Bank of Israel, whom the Senate just confirmed. There has been no real opposition by Senate Dems to any of these three nominees.