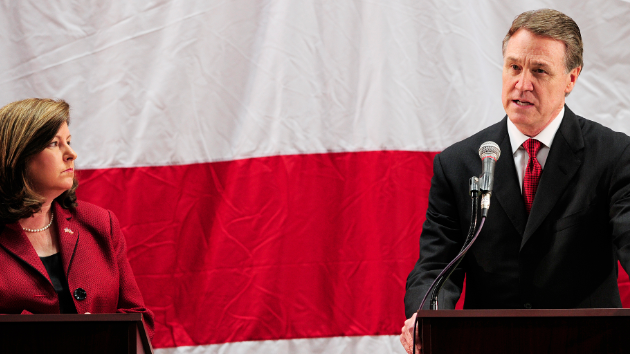 With Republicans trying to avoid a repeat of 2012’s Todd Akin disaster and retake the Senate, the Georgia GOP establishment was happy to see David Perdue, a self-funded businessman, leading in the polls ahead of Tuesday’s Senate primary. Compared to gaffe machines such as Rep. Paul Broun, who has pushed personhood for zygotes, and Rep. Phil Gingrey, who defended Akin’s “legitimate rape” comment, the former Dollar General CEO seemed unlikely to introduce fraught gender issues into the general election—where Michelle Nunn, the likely Democratic nominee, is polling well against the GOP field.

But Perdue’s record on women’s issues—specifically, whether women are entitled to equal pay for equal work—is far from clean. In 2006, three years into Perdue’s four-plus years as Dollar General’s CEO, federal investigators at the Equal Employment Opportunity Commission found that female store managers who worked for the company he ran “were discriminated against,” and “generally were paid less than similarly situated male managers performing duties requiring equal skill, effort, and responsibility.” A year later, separate from that investigation, thousands of female managers who were paid less than their male counterparts joined a class action suit against the company—which Dollar General eventually settled, paying the women more than $15 million.

“Dollar General has set up a system which permits stereotypes about men and women to be used in judging their pay.”

The case began on March 7, 2006, when Janet Calvert, the former manager of a Dollar General in Alabama, sued the company for paying her less than male managers. Dollar General, which was still under Perdue’s leadership, tried and failed to prevent other female employees from joining Calvert and suing as a class. By 2008, more than 2,100 current and former employees had joined a certified a class open to women who worked as store managers for Dollar General between November 30, 2004 and November 30, 2007. (Perdue was CEO from April 2003 to summer 2007.)

The women claimed that Dollar General was violating not only the Equal Pay Act, a federal law that prohibits pay discrimination on the basis of gender, but also Title VII of the Civil Rights Act of 1964, which prohibits employment discrimination on the basis of race, by using compensation practices that disproportionately hurt women. For example, the company considered employees’ past salary at Dollar General or other jobs when determining pay—which hurt women because they are paid less in the job market generally, and at Dollar General specifically, than men.

One plaintiff, Patty Eberle, said in a sworn statement that from 2001 to 2008, the men she trained to be store managers made more than she did as both a store manager and trainer.

“Every male manager that was hired in the Springfield, Missouri area was brought in at a higher rate than I was making as store manager,”  another plaintiff, Ruby Sims, said in a sworn statement. “A former district manager came into my office one day right before she quit working at Dollar General and provided me with documents detailing the excessive pay men were receiving for doing the same jobs as female managers.” Sims said she complained to two male superiors. “Nothing was ever done.”

The EEOC, which must green-light pay discrimination lawsuits before they can proceed in federal court, began issuing right-to-sue notices addressed to Perdue beginning in 2007. Dollar General’s filings with the Securities and Exchange Commission for that year—Perdue’s last year with the company—stated, “The Company believes that the case is not appropriate for class or collective treatment and that its policies and practices comply with the Equal Pay Act and Title VII. The Company intends to vigorously defend the action.”

“Every male manager…was brought in at a higher rate than I was making as store manager.”

The next several years saw more failed attempts by Dollar General to convince the court to decertify the class. In early 2011, the company allowed the case to go to mediation. A year later, the court finalized Dollar General’s agreement to pay $15.5 million toward a fund for members of the class, $2.8 million for a claims administrator, and $3.25 million in attorneys’ fees. The company also committed to altering its employee compensation policies.

Dollar General faced another significant lawsuit under Perdue, brought by some 2,000 current and former employees who in 2006 claimed that the company had made them managers in name only so it could deny them overtime they would have earned as store clerks. In 2013, Dollar General agreed in mediation to pay the ex-employees up to $8.5 million. That settlement awaits court approval.

Perdue’s campaign did not reply to requests for comment, and a spokesman for Dollar General declined to comment.

Besides Perdue, Gingrey, and Broun, the GOP primary field includes and Karen Handel, who is best known as the executive inside the Susan G. Komen Foundation for the Cure who pressured the group to slash funding for Planned Parenthood, and Rep. Jack Kingston, who is deeply conservative but less foot-in-mouth than his peers. The winner of Tuesday’s primary must capture 50 percent of the vote in order to avoid a July 22 runoff for the right to face Nunn in November’s general election. Polls suggest that Perdue won’t clear this threshold but is a strong contender, along with Kingston and Handel, for one of two runoff slots.