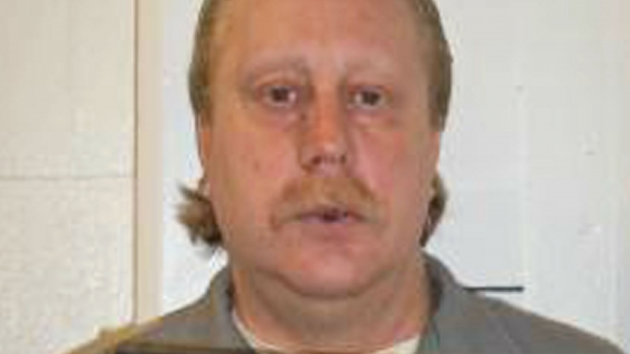 Update, May 19, 2014: On Monday, the U.S. District Court for the Western District of Missouri denied the stay of execution request of Russell Bucklew.

Next week, Missouri is scheduled to execute Russell Bucklew, who has a serious health condition, with a lethal drug whose source is being kept secret from the public. On Friday, Bucklew’s attorneys filed a motion requesting that a videographer be allowed to tape the execution in order to preserve evidence. Bucklew has tumors partially blocking his airway, and attorneys allege that there is “a very significant risk” that he will die “a torturous death” in violation of the Eighth Amendment, which bars cruel and unusual punishment.

According to the motion:

Mr. Bucklew seeks this Order so he can preserve vital evidence of the events occurring during his execution. His head, neck, throat and brain are filled with clumps of weak, malformed blood vessels that could rupture, causing coughing, choking and suffocation, or impairing the circulation of the lethal drug, causing a prolonged and excruciating execution while he struggles for air. Mr. Bucklew seeks to document these events.

Dr. Joel B. Zivot, a professor of Anesthesiology and Surgery at the Emory University School of Medicine who examined Bucklew, filed an affidavit noting that, “To my knowledge, Missouri’s execution protocol provides no contingency for a failed execution, or a situation in which the prisoner starts gasping for air or experiences hemorrhaging.”

Missouri sentenced Bucklew to death for kidnapping and raping his ex-girlfriend and murdering her partner. Bucklew’s execution arrives less than a month after Oklahoma horribly botched the execution of Clayton D. Lockett, leaving him twitching in pain and partially conscious. (About 15 minutes into that execution, officials closed the blinds, so witnesses couldn’t see.) Like Oklahoma, Missouri is using a secretly-acquired drug cocktail. On Thursday, the Guardian, the Associated Press, and three Missouri newspapers filed a lawsuit arguing that the public has a right to information about the drugs Missouri is using for its executions. The Guardian notes that the state publicized where it obtained its lethal injection drugs until last year, when, like other death penalty states, Missouri faced a shortage of lethal injection drugs in wake of European restrictions.