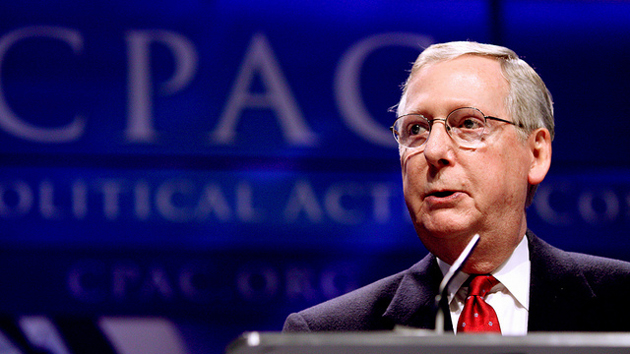 It is odd that in a year widely cited by political handicappers as favorable for Republicans, one of the most senior elected GOP officials in Washington—Mitch McConnell, the minority leader of the Senate—is perhaps the most embattled Republican incumbent up for reelection. Though McConnell easily fended off a tea party challenge in his home state of Kentucky, defeating businessman Matt Bevin in Tuesday’s Republican primary contest, the five-term senator will now face off against Alison Lundergan Grimes, Kentucky’s Democratic secretary of state, in a race deemed to be one of the more competitive clashes of the year. Yes, with Republicans riding high—and giddy at the prospect of taking the Senate—their main man in the Senate is fighting for his political life. Why is this? The answer may be simple: He’s not that likable.

In his decades in public life, McConnell has not been fully embraced by his fellow Bluegrass Staters. He won his Senate seat by taking on Democratic incumbent Walter Huddleston in 1984, and he bagged merely 5,200 votes more than Huddleston—about a 0.4 percent margin. (Ronald Reagan won the state that year by 21 percentage points.) In his four subsequent reelection bids, McConnell only topped 55 percent of the vote once. (In 2002, he drew 64.7 percent.) These days, his approval rating in the state hovers in the low 30s —far below President Barack Obama’s anemic national numbers. Given McConnell’s low standing, almost any Democrat who doesn’t drool would stand a chance against this well-funded, influential Washington power broker.

McConnell’s political unpopularity among Democrats is not surprising. He lacks the slightest hint of charisma or charm—or personality—that conservatives sometimes can employ to win over Dems, especially in Southern states. He certainly doesn’t look good holding a gun. His awkward relationship with conservatives is a bit puzzling. In Washington, he has in recent years developed the rep as a chief obstructer of Obama. In 2010, he notably said, “The single most important thing we want to achieve is for President Obama to be a one-term president.” What’s not for a tea partier to like about that? McConnell has been a steady foe of Obamacare and still calls for its repeal. Yet the TPers in the GOP have squawked for years that McConnell is an accommodationist. He went along with the TARP bailout, and he negotiated last-minute deals with Obama on tax cuts and the debt ceiling. But these actions ended up well—even by conservative standards. The bailout led to a profit for taxpayers, and McConnell’s backroom wheeling-and-dealing won the Rs an extension of the Bush tax cuts, a sharp drop in the estate tax, and dramatic spending cuts.

Yet McConnell has not been a bomb-thrower at the front lines of the tea party crusade. When tea party fave Rand Paul ran for the US Senate in Kentucky in 2010, McConnell backed an establishment Republican, Trey Grayson, in the GOP primary. Though McConnell proudly held the debt ceiling hostage in 2011, he was not a champion of shutting down the government in 2013 to force a repeal of Obamacare (or to win other concessions), à la Ted Cruz. And for years, McConnell has feuded with Jim DeMint, the onetime Republican senator who created the Senate Conservatives Fund, which has raised money for tea party GOPers taking on establishment Rs. (DeMint’s group endorsed Bevin over McConnell.)

The ideological enmity McConnell has aroused on the right in his home state seems disproportionate. McConnell has done much for the conservative cause in Washington, yet apparently he is seen by many conservatives as a wimp, RINO, traitor, or all of the above. A recent poll found that only 39 percent of Bevin supporters would vote for McConnell in November and that 25 percent of Bevin supporters say they will stomp across party lines and vote for the Democratic candidate in the general election. It’s hard to believe that a quarter of the folks supporting a tea party candidate will switch to Grimes in the fall. But what these numbers suggest is that tea party GOPers in Kentucky truly detest McConnell.

Are ideologically minded voters put off by McConnell because of him, not his positions? There is something that seems shifty about McConnell. He is an insider—a fellow who relishes cutting a complicated legislative deal on deadline and hobnobbing with K Street lobbyists—who tries and fails to come across as a one-of-us politician. He began his political career as a moderate Republican and veered right later on. He’s not been able to integrate fully his conservative stances, his official actions, and whatever down-home appeal he can muster, as say Bob Dole did when he was a senator from Kansas.

But whatever McConnell lacks in the personality department, he compensates when it comes to political skills and ruthlessness. He won the Senate seat initially largely because his campaign consultant—a fellow named Roger Ailes—produced what has become an infamous television ad that showed bloodhounds searching for Huddleston. (The point: Huddleston had missed several Senate votes to do speaking gigs.) This time around, McConnell showed how calculating and unsentimental he could be by hiring Jesse Benton to run his reelection campaign. Benton managed Rand Paul’s 2010 Senate campaign (which McConnell opposed) and then-Rep. Ron Paul’s 2012 campaign. And the Paul camp from which Benton hailed has been allied with DeMint. (Benton told an Iowa activist he was “sort of holding my nose” to work for McConnell.) McConnell was embracing the enemy and slyly undermining the tea party assault against him.

Moreover, McConnell extracted an endorsement from Rand Paul. It wasn’t much of an endorsement; Paul would not publicly say why he was backing McConnell. But McConnell had succeeded in preventing the forces that elected Paul from fully gathering behind Bevin, making sure there would be no full-scale tea party rebellion against him. When Amy Kremer last month resigned as chair of the Tea Party Express, she complained that the group was not working for Bevin in Kentucky. (Interesting side note: The woman who runs Rand Paul’s political action committee is the daughter of the guy who runs the Tea Party Express.)

McConnell will do whatever it takes. A year ago—when actor Ashley Judd, a Democrat, was considering challenging McConnell—Mother Jones revealed a tape of a private McConnell campaign meeting in which the senator listened as his aides gleefully considered assaulting Judd for her past struggles with depression and for her religious views. He did not raise any objections. McConnell will run a smart and tough campaign against Grimes. He will valiantly defend his opposition to Obamacare in a state where nearly 400,000 residents have signed up for health care under the Affordable Care Act. He will try to shackle Grimes to the not-so-popular president. He will continue to dispatch his wife, Elaine Chao, a former labor secretary, to attest to his “love” for Kentucky—and to make McConnell seem amiable enough.

Grimes—a younger female candidate who comes from a long-established political family in the state—is frequently described by pundits as McConnell’s most competitive foe in decades and a stronger challenger than Bevin. As can be expected in a race that will draw much national attention and oodles of out-of-state campaign cash on both sides, this contest will get ugly. But with the hard-nosed and cold-blooded McConnell in a corner, it is likely this election will exceed those expectations. When a candidate doesn’t have to worry about his likability—and for McConnell it may be much too late for that—the incentive is to get nastier…and nastier.