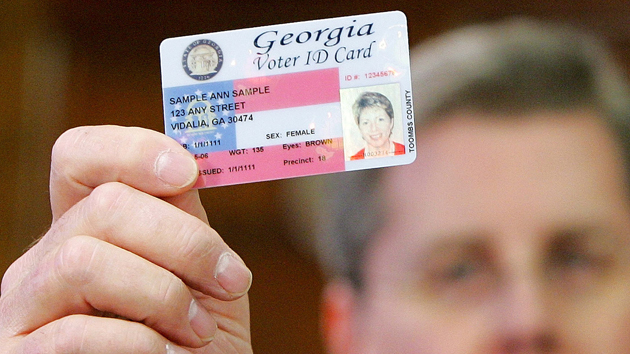 Georgia Gov. Sonny Perdue holds up a sample Voter ID after signing the bill into law at the Capitol in Atlanta.AP Photo/Ric Feld

Today, more than 700,000 Alabamans are headed to the polls for the state’s Democratic and Republican primaries. It’s the first election since Alabama passed its tough new voter ID law, but the Alabama Republican Party apparently doesn’t think the bill goes far enough. According to the state GOP newsletter, the party is sending trained volunteers to patrol polling places—and offering $1,000 rewards for tips that lead to felony voter fraud convictions?—all of which could add to the confusion surrounding the new law’s requirements. Below is a snippet from the newsletter, which went out Monday:

Any suspicion of fraud or witnessing the willful non-enforcement of the Alabama’s voter laws needs to be reported….”Reward Stop Voter Fraud” signs with our hotline number will be placed at random polling locations tomorrow and at all polling locations in November. Poll watchers trained by ALGOP staff will also be watching to ensure that Alabama’s election laws—including the new photo voter ID law—are not being violated. Our signs and poll watchers will send a clear message to those wishing to commit voter fraud. Anyone attempting to tamper with the election process will be caught and will be prosecuted.

The campaign is reminiscent of the controversial “ballot integrity” initiatives that cropped up around the same time as the 1965 Voting Rights Act, which banned discriminatory voting practices such as poll taxes and literacy tests. Under a program called Operation Eagle Eye, the Republican National Committee recruited tens of thousands of volunteers to patrol polling places in heavily Democratic neighborhoods. The ostensible goal was to deter voter fraud, but some of their techniques seemed designed to intimidate voters. Poll watchers were encouraged to snap photos of people casting ballots and enlist Republican-friendly sheriffs to help block voters whom the party had deemed ineligible. In Alabama, the GOP also offered rewards for tips leading to arrests and convictions for breaking certain election laws.

Operation Eagle Eye was later disbanded, but these tactics remained commonplace, at least until 1981. As I reported in the Atlantic last election season:

That year, the party hired a swashbuckling 29-year-old named John Kelly to organize “ballot security” for New Jersey’s gubernatorial election. Kelly, who turned up in the state wearing cowboy boots and a 10-gallon hat, arranged to have hundreds of thousands of sample ballots mailed to voters in black and Latino neighborhoods. His team then compiled a list of people whose ballots were returned as undeliverable, and allegedly tried to have them struck from the rolls….

Kelly and his associates also recruited squadrons of men—many of them off-duty police officers—to descend on black and Latino precincts around New Jersey on Election Day. Wearing National Ballot Security Task Force armbands, walkie-talkies, and in some cases guns, the men posted signs warning in large red letters that the areas were being patrolled. They then stationed themselves around polling places and allegedly tried to stop those whose names appeared on the caging list from voting.

According to a Republican Party lawyer who was on the scene that day, before the polls closed, Kelly hightailed it out of the state in a Chevy Impala, armbands and signs stuffed in the trunk. When the Essex County prosecutor’s office launched a statewide criminal investigation the following week, he was nowhere to be found.

In the end, prosecutors didn’t bring charges—no would-be voters stepped forward to say they had been blocked from casting ballots—but the Democratic National Committee filed a federal lawsuit accusing Kelly and the RNC of violating the Voting Rights Act. To settle the case, in 1982 the RNC signed a consent decree, agreeing to end all “ballot security” programs targeting minority precincts.

Despite the decree, four year later the RNC was caught staging a ballot security campaign in Louisiana. According to an internal memo from a Republican official involved in the effort, the goal was to “keep the black vote down.” The DNC filed another suit, after which the RNC agreed to tighter curbs.

Studies show that the type of voter fraud these ballot security campaigns are meant prevent, voter impersonation, is virtually non-existent. Still, as recently as 2008 the RNC has tried to get the decree on them lifted. Federal Judge Dickinson Debevoise, who oversaw the 1980s proceedings, declined the request, citing the large share of minorities who vote for Democrats. “As long as that is the case,” Debevois wrote in his ruling, “the RNC and other Republican groups may be tempted to keep qualified minority voters from casting their ballots, especially in light of the razor-thin margin of victory by which many elections have been decided in recent years.” The ban has a major loophole, however: it does not apply to state parties, such as the Alabama GOP.