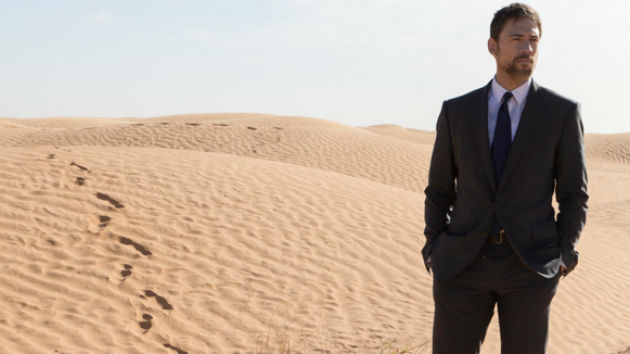 Tyrant—a bloody, tense family drama that just so happens to be set in an Arab dictatorship—is a TV show that feels destined for controversy. And that’s familiar territory for  showrunner Howard Gordon, best known for his work on the hyper-controversial, torture-heavy 24.

The new series, created by Gideon Raff, tells the story of Bassam “Barry” Al-Fayeed (played by Adam Rayner), the son of a brutal dictator of a fictional Middle Eastern country, as he reluctantly returns to the family business from a happy life in the United States after two decade living in self-exile. (Think The Godfather meets the Assads.) Tyrant premieres Tuesday night on FX—and Gordon has been gearing up for any potential backlash it might bring his way:

“Bring it on!” Gordon told reporters in January.

“Come on, Roger [Ailes]!” he joked. “I’ve been called an Islamophobe and a torture monger, so what else can they call me?”

I’ve only seen the first episode (which is visually gorgeous and rather compelling), so I have no idea why the series might possibly piss off the Fox News president or his platoon of commentators. However, it certainly isn’t hard to imagine that a TV show focused on trigger-happy, iron-fisted Arab Muslims might irk certain groups and people concerned about negative stereotypes and hackneyed cultural depictions in American entertainment. But Gordon has taken steps to assure potential viewers that he was more than aware of such concerns, and acted accordingly. More on that from the Daily Beast, which interviewed him:

Howard Gordon has done something different with Tyrant: He has included Arab-Americans and Muslims in the creative process. As Gordon explained to [the Daily Beast], his motivation in doing this arose from being “concerned that there might be potential sensitivities that I may not be aware of.”

Gordon did a few things to include Arabs and Muslim voices in Tyrant…For one, he hired an Arab-American for the writing staff. Plus he reached out to a well-known Muslim-American group, the Muslim Public Affairs Council (MPAC), over a year ago for their input on early drafts of the pilot script.

As Gordon explained: “MPAC has had a significant impact on the development of this project from its inception.” Gordon added: “I tried to address their concerns regarding cultural inaccuracies and potentially incendiary characterizations. I may not always have been entirely successful, but the dialogue has always been open and fluid.”

Suhad Obeidi, the head of the Hollywood bureau of MPAC, spoke positively about the experience of working with Gordon. Obeidi explained that Gordon truly did revise the script in many—not all—places flagged by MPAC.

It wouldn’t be the first time that Gordon consulted a Muslim-American group regarding controversial content. When the Washington, DC-based Council on American-Islamic Relations (CAIR) reached out to Fox and 24‘s producers to express concerns over the fourth season of 24 (which features a Muslim-American Los Angeles family that leads an Islamist sleeper cell), they responded by inviting CAIR representatives out for a meeting in LA to share their thoughts and criticism. In the months and years that followed, CAIR and the 24 crew maintained an open dialogue.

“They were very, very receptive,” Rabiah Ahmed, a former CAIR employee who attended the meeting, told me. “Howard Gordon was such a gentleman. He pulled me aside after the meeting and said their intentions were never to harm the community, and that they are very sensitive about how we feel, and how their work impacts the larger society…I was very touched by his sincerity.”

Still, Gordon’s latest offering has attracted some harsh words from a familiar organization: “[CAIR has] asked reviewers to address stereotyping of Arab and Muslim culture inherent in the new FX Networks series Tyrant,” the group wrote in a press release last week.