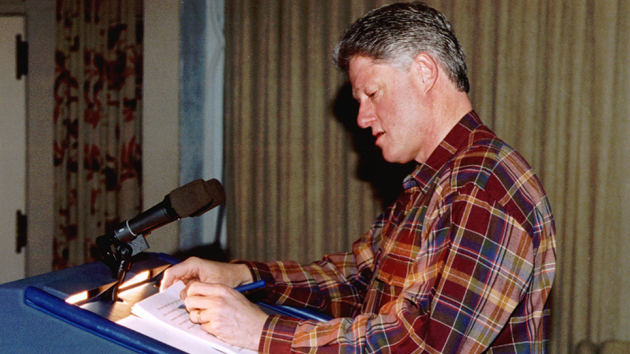 President Bill Clinton working on his 1996 State of the Union address.White House/AP

During a January 1996 staff session, while then-President Bill Clinton and his staff were working on his upcoming State of the Union speech, Clinton let loose in a long rant about a Republican proposal to gut the Commerce Department. One reason for the GOP opposition to the government agency was race, he noted. Republicans in Congress, Clinton said, only began to dislike the Commerce Department after he appointed an African-American to head the department.

“The reason they want to get rid of the Department of Commerce,” Clinton said, “is they are foaming at the mouth that Ron Brown is better than all of those Republican corporate executives who got those cheeky jobs because they gave big money to Republican presidential candidates. And here is this black guy who is a better Secretary of Commerce than anybody since Herbert Hoover, which he was a success at.”

Notes from this meeting were released by the Clinton Library as part of a larger document dump on Friday. Throughout the spring, the library has released batches of internal documents from the Clinton White House.

Clinton’s diatribe immediately followed a discussion of how he should pitch the successful outcomes of the administration’s crime policy, which dovetailed into a larger discussion of Republican opposition to Clinton’s administration. “I mean, they’ve taken a laundry list, and everything we did, if it’s really working, they really want to get rid of it,” Clinton said. That’s when the president began griping about the Republicans targeting the Commerce Department for possible elimination, indicating that race was a factor. “They will get rid of the Department of Commerce so they’ll never have to remember that Ron Brown, a black Democrat, was better than all their big, corporate muckety-mucks that make American jobs. I mean, it’s crazy. It’s unbelievable.”

An unnamed aide asked Clinton if that sentence should go into the State of the Union address. There was laughter in the room. “No,” Clinton responded, “but I mean, they need a rabies shot.”

Clinton appointed Brown, the first African-American to lead the Commerce Department, in 1993. But in April 1996, while Brown was on an official trip in Croatia, Brown’s plane crashed, killing the commerce secretary and 34 others. 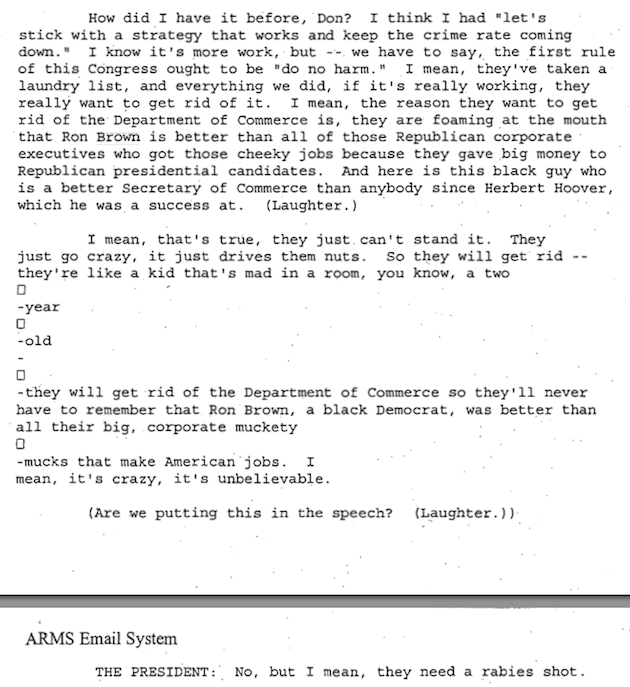