On June 29, 2013, I attended Kristin Perry and Sandra Stier’s wedding at San Francisco’s City Hall and filmed the video above.

It was an especially jubilant occasion that marked the end of a long legal battle. Earlier that week, they won their Supreme Court case, Hollingsworth v. Perry, on a 5-4 decision. The ruling officially overturned Proposition 8—an earlier ballot initiative that nullified a 2008 ruling from California’s highest court legalizing gay marriage—effectively making gay marriage legal again in the state. Perry and Stier wasted no time, and became the first same sex couple married under California’s new legal regime.

All of us in attendance that day, from media, to family, to other spouses-in-waiting, were aware of the historical significance of Perry and Stier’s nuptials. But we hadn’t witnessed the behind-the-scenes story that led to their marriage. Now with HBO’s new documentary The Case Against 8, which premieres Monday night, we get an exclusive look at the emotion and effort that took their case all the way the Supreme Court.

The Case Against 8‘s story begins with election night in 2008. While much of the country was celebrating Barack Obama’s victory, gay marriage supporters were shocked and saddened by the election results coming out of California, where voters had approved Prop 8. As Ben Cotner, a co-director of the documentary, told Mother Jones, “none of us thought it would pass.” He describes that night as “a wake up call to gay people that we weren’t doing enough.”

Soon after the ballot initiative passed, Cotner and co-director Ryan White got in touch with the two marquee attorneys who would lead the legal challenge to invalidate Prop 8—the very-odd-couple of Ted Olson and David Boies. In 2000, Olson and Boies squared off against each other at the Supreme Court as lawyers representing George W. Bush and Al Gore, respectively, in the presidential election-defining Bush v. Gore case. In The Case Against 8, we see them united once again, but now as allies for a progressive cause.

From the beginning of the film, we’re reminded how surprising it was for Olson to emerge as a full throated supporter of gay marriage. After securing the White House for George Bush, Olson served as the socially conservative administration’s Solicitor General. For decades, spanning from his time as an assistant attorney general under Reagan to his 2009 oral arguments on behalf of Citizen’s United in the Supreme Court case that lifted key limits on corporate campaign spending, Olson had amassed a resume that made him one of the Right’s leading legal lights. Kristina Schake, an official at the non-profit that spearheaded the challenge to Prop. 8, puts it simply, describing Olson as “the most prominent conservative lawyer in America.” 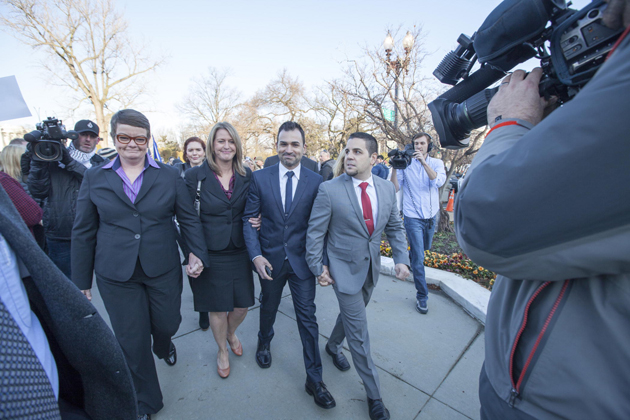 “People were worried he was a mole or would sabotage the movement,” co-director Ryan White told Mother Jones. But throughout The Case Against 8, Olson is seen tirelessly fighting, both in private and in the courtroom, for gay couples’ right to marry, calling marriage itself a “conservative value.” White says Olson deserves a lot of credit, noting that “even our own President [Obama] wasn’t in favor of gay marriage when our filming began.”

Olson and Boies were amenable to letting cameras observe their work, but the decision to allow filming in private meetings ultimately fell to their clients: Kristin Perry, Sandra Stier, Paul Katami, and Jeffrey Zarrillo—the gay couples who were the battle’s public faces. Opening their private lives to the documentarians for what would surely become a stressful, emotional, and vulnerable period was no easy decision. But the couples decided to allow access because they believed in transparency and the educational value of the case.

Early in The Case Against 8, there’s a scene showing a grueling prep session between Perry, Stier, and their lawyers. Attorney Sarah Piepmeier is playing the role of an opposing lawyer, preparing Stier for her first appearance on the stand. Piepmeier asks a series of questions and presents research intended to discredit Perry and make her intentions for the case appear entirely selfish. Following an uncomfortable few minutes, Piepmeier hands Stier a printout of her Facebook page, and says, “Your description for yourself was: ‘Middle-aged mom with delusions of grandeur.'” Stier replies sheepishly, “Yes,” to which Piepmeier says, “Ok, I have no further questions.” Stier explodes with embarrassment and laughter and Perry adds, “That is so mean! What the hell?!” It’s clear that when the real trial begins, these moments of levity and safety will vanish.

Kristin Perry has four sons who are featured throughout the film as important sources of inspiration for the couple. “You don’t always take the time to listen to your moms,” said co-director White, “but to hear them talk about it on the stand…they were in tears.”

To win, the plaintiffs had to expose, explain, and describe their feelings for one another and for their families, which is not always easy to do in private, much less before a court and all the world. These scenes make The Case Against 8 not only an intimate look at the legal groundwork that led to Hollingsworth v. Perry, but also an honest, riveting account of love—and a recognition of how far this fight has come.

The Case Against 8 premieres Monday June 23 on HBO. Watch the trailer: