Twenty-five years ago, the Communist Party leadership of China violently suppressed student demonstrations in Beijing’s Tiananmen Square, killing countless peaceful protesters. The demonstrations began in April as spontaneous rallies commemorating the life of Hu Yaobang, a politician whom students regarded as open-minded and pro-reform. But soon, the protests had become a nationwide call for increased democratic rights, government transparency, and freedom of the press. The movement threatened the top leadership to its core, and during the night of June 3, 1989, and the morning of June 4, troops cleared the square. These photos trace the short arc of the demonstrations and their devastating aftermath. 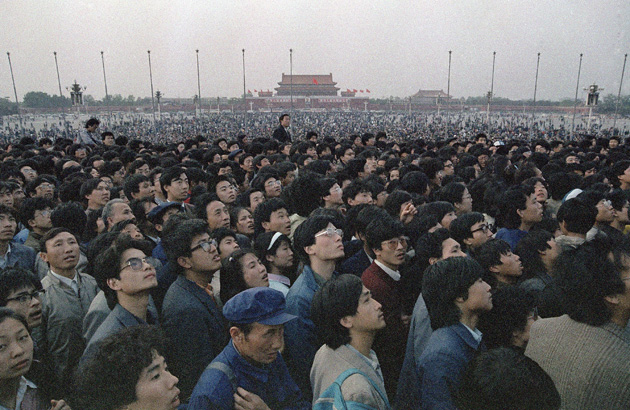 April 21, 1989?: According to official government documents compiled in the Tiananmen Papers, an exhaustive account of the demonstrations, emotions in the square reached a “fever pitch” on this day. In this photo, taken on April 21, people flock around the Monument to the People’s Heroes, where, several days earlier, a group of art students had placed a portrait of their hero, Hu Yaobang, opposite Mao’s portrait (which you can see in the background). Students representing 10 universities marched on the square on the day photographed, circulating petitions demanding competitive elections and political reforms. According to an official government account, they chanted: “Long live democracy!” and “oppose dictatorship!” (Sadayuki Mikami/AP) 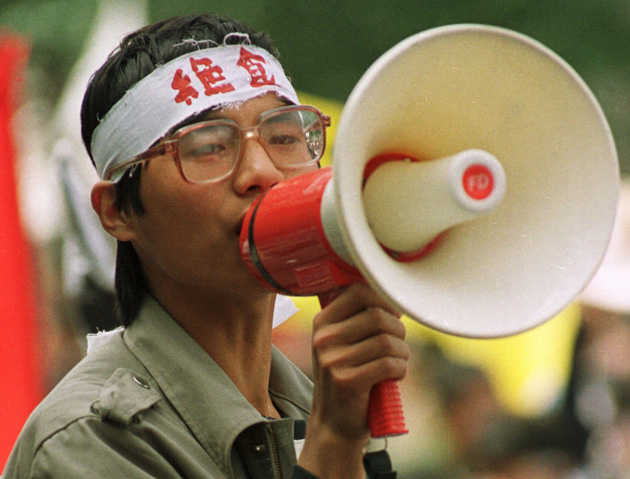 May 1989: Wang Dan, a 20-year-old freshman studying history at Beijing University, rose to prominence in the student occupation of the square, seeming to hold “the greatest influence,” according to a New York Times profile filed at the time. The characters on Wang’s headband read “hunger strike,” because hunger strikes were a key element of the protests. After the crackdown, Wang was one of 21 people the government identified as key leaders of the protests, and was among those who were rounded up and sent to prison. He was released in 1993, only to be rearrested in 1995 and sentenced to 11 more years.

Canadian journalist Jan Wong wrote that during his time in prison, Wang Dan marked each anniversary of the massacre with a 24-hour hunger strike: “I plan to do so every June 4th for the rest of my life,” Wang said. These days, Wang Dan describes himself as “an incorrigible idealist” on his Twitter profile. (AP Photo) 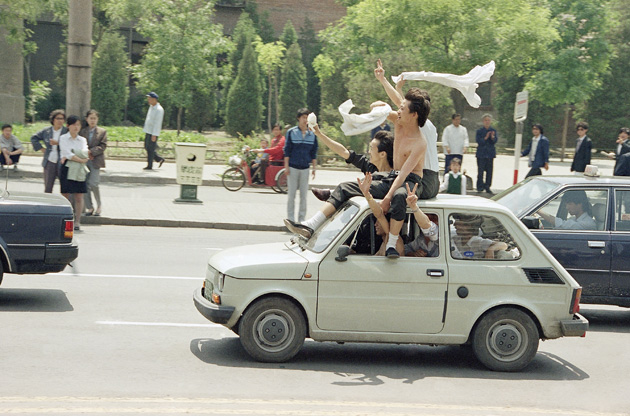 May 17, 1989: This photo captures the spirit of the early protests, which were raucous and attracted broad support from locals and the media. International coverage of the 1989 events might lead you to believe the student protests only happened in Beijing. But on May 17 alone, 27 provinces reported large-scale demonstrations—16 of which included 10,000 or more protesters, according to the Tiananmen Papers. The widespread unrest put the pressure on leaders to come up with a solution, and in the Chinese corridors of power, the embattled and divided Politburo was reaching the conclusion that martial law was a necessary step in putting down the protests. (Sadayuki Mikami/AP) 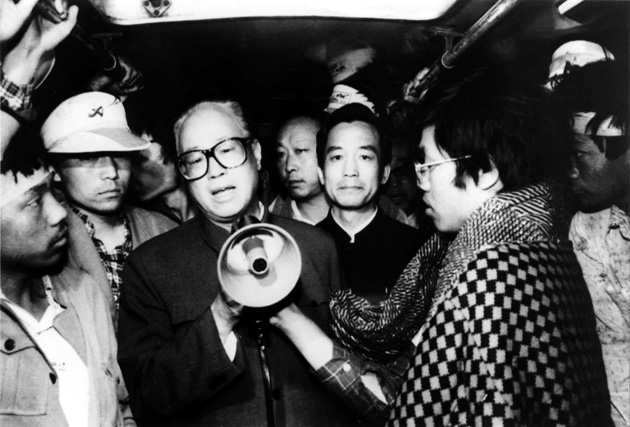 Friday May 19: Zhao Ziyang, the Communist Party General Secretary who had pioneered market reforms, meets with fasting students in Beijing to urge them to stop their hunger strike. Zhao, who had pushed for a more lenient reaction to the protests, was later ousted from government. “We have come too late,” he said to the students that day, in comments broadcast on television. “I am sorry, fellow students. No matter how you have criticized us, I think you have the right to do so. We do not come here to ask you to excuse us.” After negotiations with the students failed, Communist Party leaders ordered a troop takeover of Beijing, and People’s Liberation Army troops began to occupy Beijing. (Xinhua/AP) 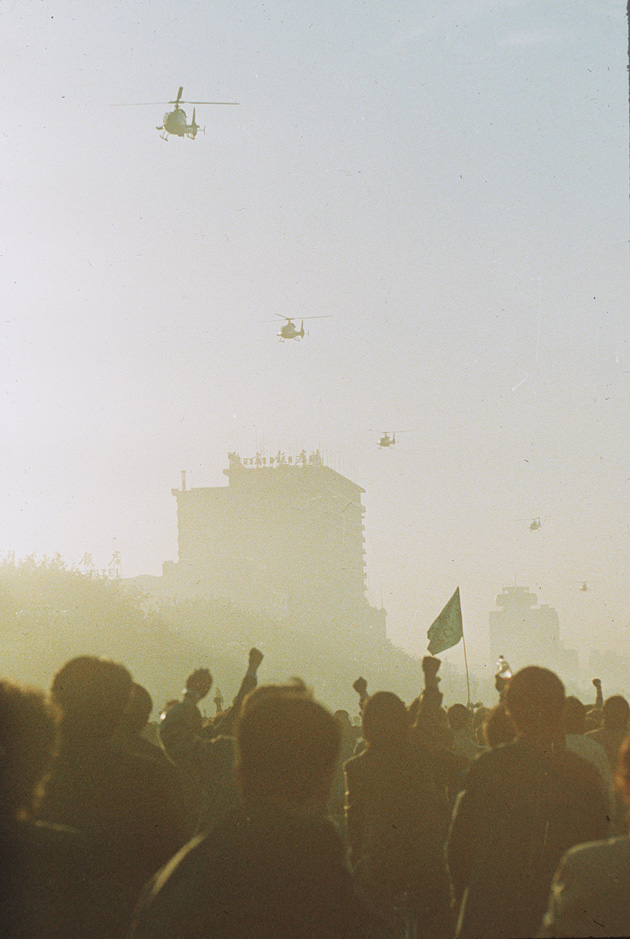 May 21, 1989: University students wave fists and flags as five Chinese military helicopters fly over Beijing at dawn. The number of people in the square swelled to some 300,000 on this day. Reports said that locals pleaded with army officers to resist using force, and prevented troops on the ground from reaching the square. (AP Photo) 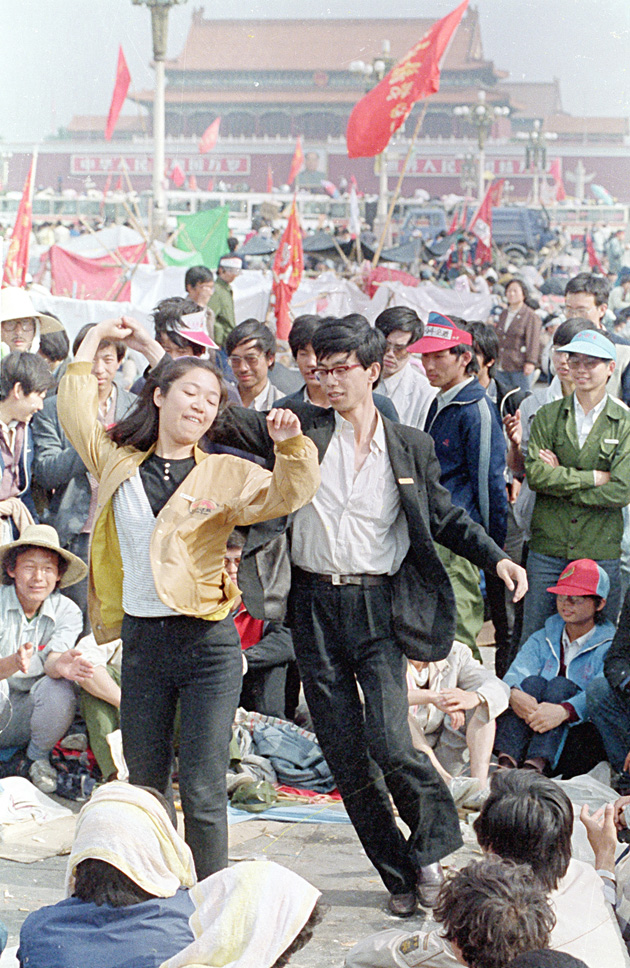 May 22, 1989: A young couple dances among a crowd, which had been occupying Tiananmen Square for nine days at this point. What strikes me about this photo is how different the square—and young peoples’ relationship to politics—is today. A generation on, young Chinese have been deprived of the cultural memory of Tiananmen. Many young Chinese have never learned about the events around June 4. If they have heard anything about what is euphemistically called the “incident,” it’s often that it was a blip on the radar in the otherwise unblemished history of Communist rule. Of course, the sanitized version is far from the truth…Louisa Lim, NPR’s Beijing correspondent, calls today’s China The People’s Republic of Amnesia. (Mark Avery/AP) 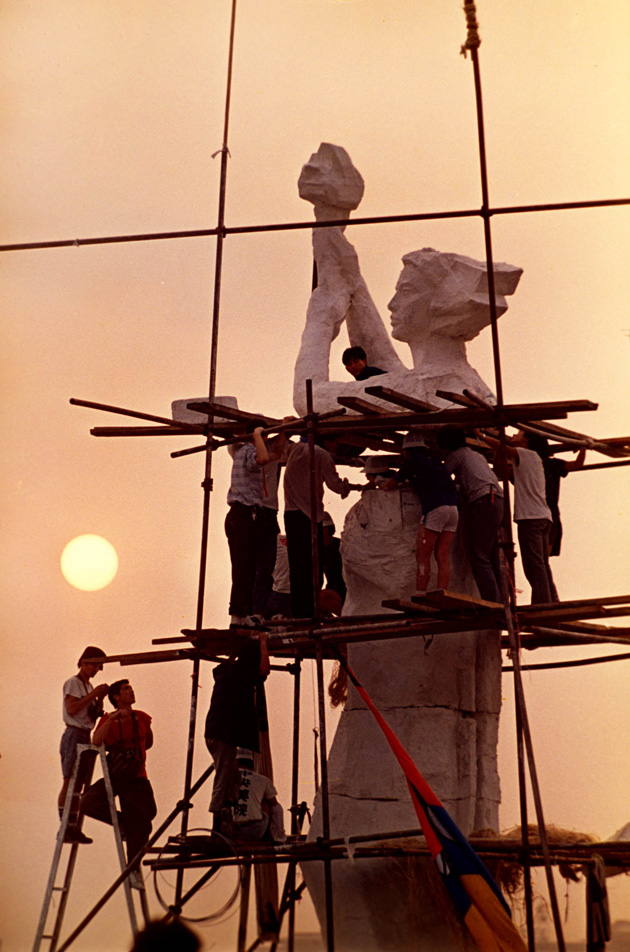 May 30, 1989: Protesters occupying Tiananmen Square work on the statue of the Goddess of Democracy, a plaster symbol of resistance and unity modeled after the Statue of Liberty. (Jeff Widener/AP) 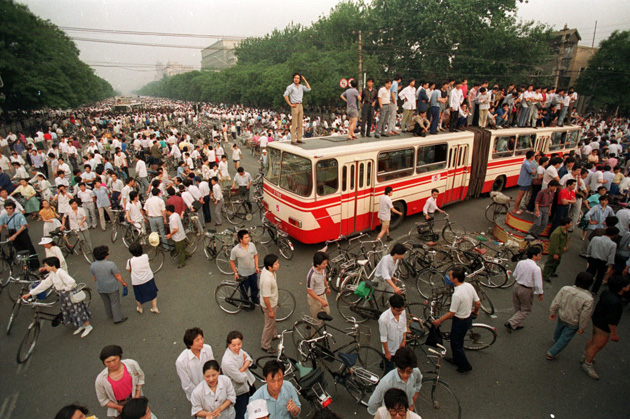 June 3, 1989: This photo depicts a moment just before the government’s response to the demonstrations turned violent. On June 3, huge crowds gathered at a Beijing intersection. The bloody crackdown was about to begin. This time, the troops had strict orders: Clear the square. (Jeff Widener/AP) 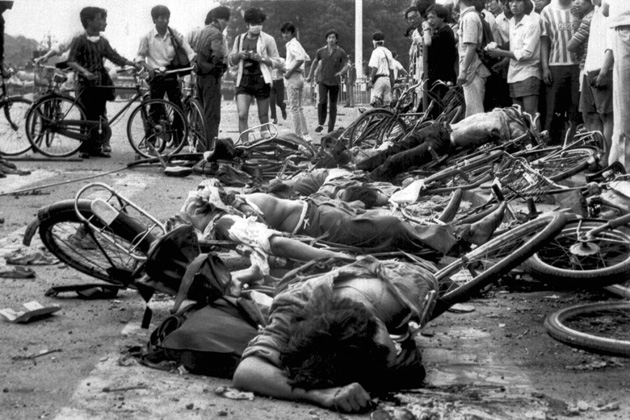 June 4, 1989: The bodies of dead civilians rest among mangled bicycles near the square. (AP Photo) 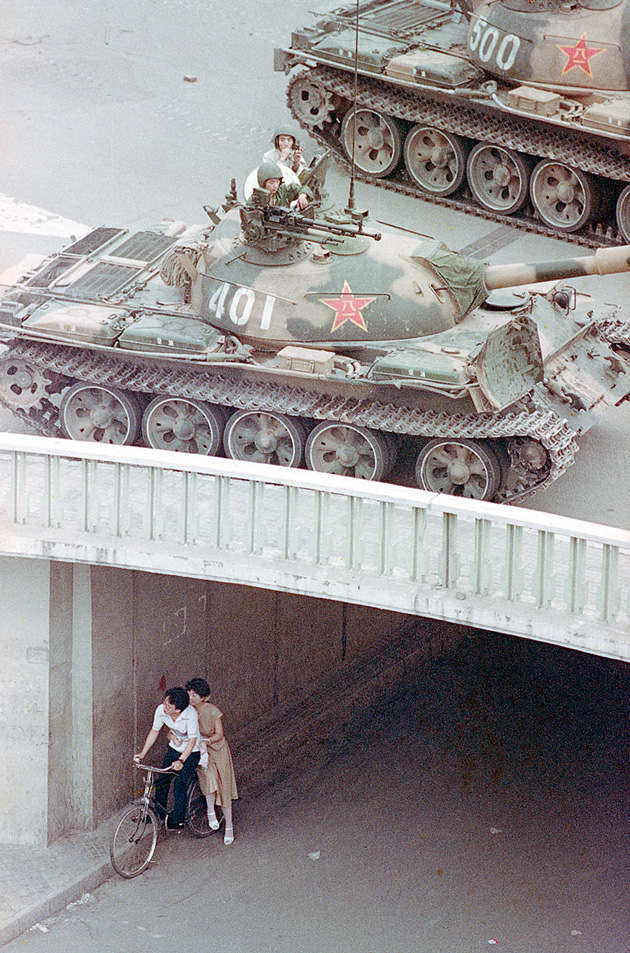 June 5, 1989: In eastern Beijing, a Chinese couple on a bicycle take cover at an underpass as tanks roll past overhead. (Liu Heung Shing/AP) 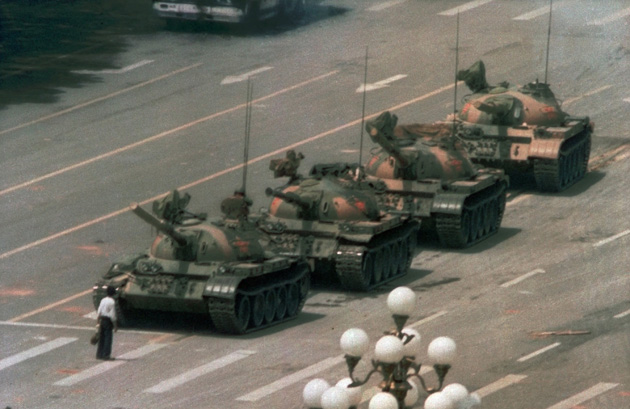 June 5, 1989: “This guy’s going to screw up my picture,” Associated Press photographer Jeff Widener thought as a man appeared in front of four tanks in Tiananmen Square. “I really thought I’d missed the hoop on that basketball court,” Widener told me in a 2009 interview, explaining that he took this photo while leaning over a balcony of the Beijing Hotel, with all the wrong camera settings, concussed from a stray rock, and suffering from a cold. “I think about how close I came to not getting the picture,” he added.

Widener was able to smuggle the film out of the hotel with the help of a young tourist. The next day, he arrived at the AP offices in Beijing to learn that his photo was on the front pages of the world’s newspapers. Its power only dawned on him later: “It’s a bit like David and Goliath,” he said. “It’s just so overpowering—it’s like an ant against an elephant.”

We still don’t know the identity of Tank Man. “Many people would like to know who he is, and personally, my feeling is is that it’s kind of neat that we don’t know who he is, because he’s sort of representative of the unknown soldier,” Widener said. This photo is “part of me,” he added. “I’m responsible for telling its story over and over and over again.” (Jeff Widener/AP) 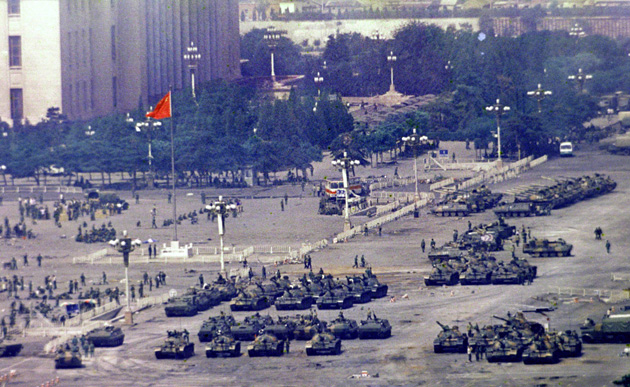