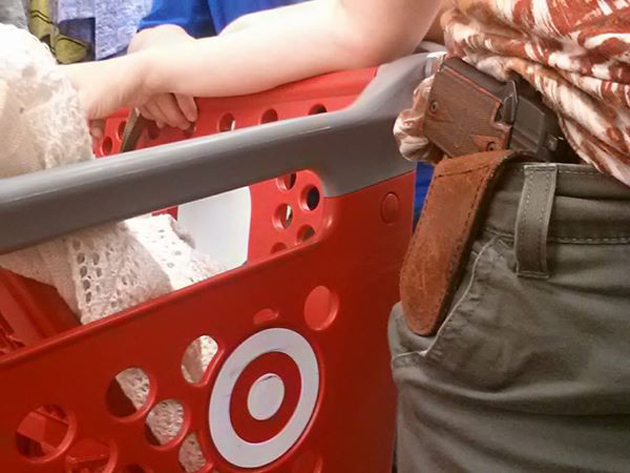 A battle over gun politics that first put Target in the crosshairs in Texas has begun to spread around the country. Over the past week, several people have openly carried handguns into Target stores in Virginia and Oklahoma and posted pictures of themselves on Target’s Facebook page, using the hashtag #OnTarget and thanking the retailer for “their decision to not ban guns in their stores or lots.” The armed people were responding to mounting pressure on Target from Moms Demand Action for Gun Sense in America, which has used a social-media campaign (hashtag: #OffTarget) to denounce a string of open-carry demonstrations first involving stores in Dallas-Fort Worth and Corpus Christi.

This week’s 2A activists—who included two men and another person who appeared to be a woman—posed with the chain’s signature red-and-white shopping carts, Target receipts, and their holstered handguns. Then they uploaded the photos to Target’s Facebook page: “#OnTarget will continue to shop Target while they support the Second Amendment,” the woman who packed heat inside an Oklahoma store commented in her post on June 21, adding, “#OffTarget is for idiots who think the government can protect them.”

The man who displayed his gun at a Target in Chesterfield, Virginia, on June 23 commented that it was “awful” for Moms Demand Action to pressure Target to ban “law abiding citizens who carry for self-defense,” adding, “to show my support for Target, I visited my local store and spent some money.“

It is legal, with a state-issued permit, to openly carry handguns in Oklahoma. It’s also legal in Virginia, where no permit is required to do so.

Target’s Facebook page was also riddled with harsh comments from customers opposed to the open-carry activism. In response to a Target post on Wednesday advertising Annie’s Cheddar Bunnies, one person reposted the photo of the armed Virginia man, commenting: “Love me some Annie’s snacks, but I won’t be buying them at Target as long as they allow trigger happy nut jobs like this to wander their aisles armed with deadly weapons.”

“Who needs an AR-15 to buy legos or baby toys?” asked another customer, alongside an image of heavily armed men taken in a Dallas-Fort Worth store in March, which included at least one member of a gun-activist group involved in disturbing intimidation tactics against women. “I do not want to have my children near AR-15s where we shop for toys. I will shop elsewhere.”

In several communications with Mother Jones since June 16, Target, which does not sell guns or ammunition, has said that it complies with all applicable laws. But the company has declined to say whether it has an official policy on guns, or even whether it might be considering one in light of the rising open-carry issue. However, an official with the Texas Alcoholic Beverage Commission told me last week that Target has since instructed its personnel in Texas to forbid firearms in stores there, as guns on the premises where the company sells alcohol would put it in violation of state regulations. And the CEO of The Honest Company, which recently launched a strategic partnership with Target to sell its eco-friendly family products, told me that his business is “working directly with Target on a daily basis” to find a solution, further acknowledging that “it’s a very important issue for the entire country, and for parents and moms.” 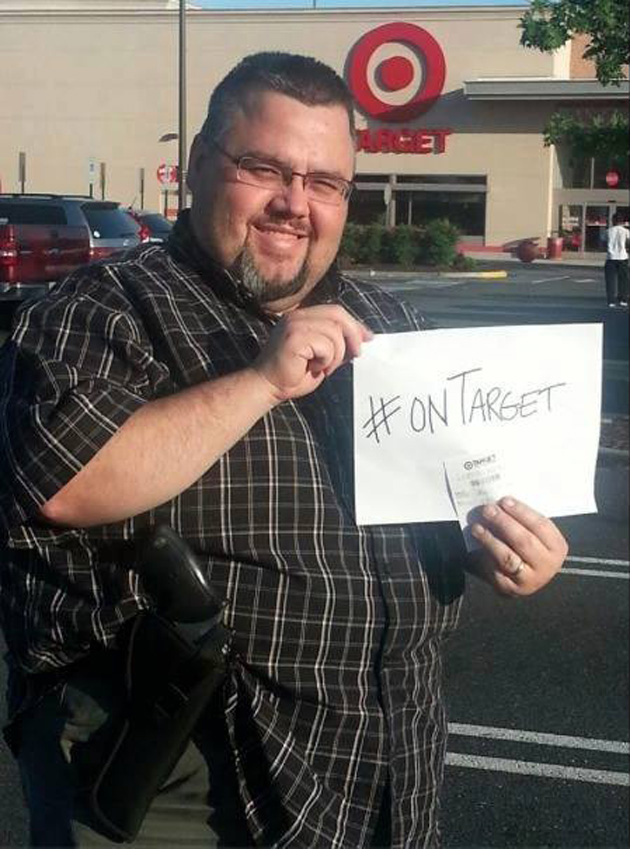 For more of Mother Jones’ award-winning reporting on guns in America, see all of our latest coverage here, and our special reports.