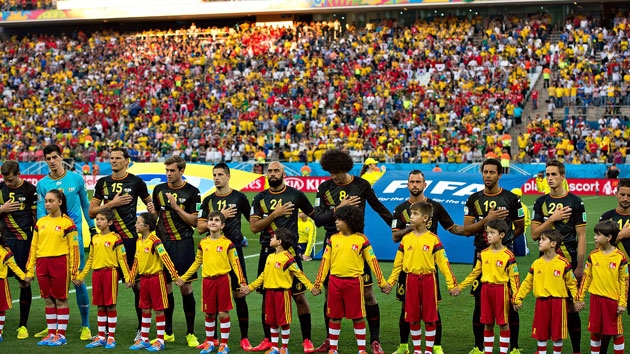 The Belgian team before its match against South KoreaJorge Martinez/Imago

When the Belgian soccer team takes the field today against the United States, it could be for the last time—and not just for this World Cup. By the time the next Cup kicks off in 2018, Belgium may not exist at all.

Belgium was an invention of the 19th century: culturally and linguistically, it’s divided cleanly between the Dutch-speaking region of Flanders in the north and French-speaking Wallonia in the south. Brussels, the capital of both Belgium and the European Union, is right in the middle. Recently, politicians in Flanders—which became wealthier than industrial, coal-mining Wallonia in postwar Europe—have pushed for independence, leading to serious strife between the country’s two largest political parties.

Those parties, the Dutch-speaking New Flemish Alliance (N-VA) and the French-speaking Christian Democrats, failed to form a government last week when Flemish leaders walked away from coalition talks. The last time Belgium couldn’t form a government was in 2010; it took the parties 18 months to finally do it. The N-VA is a separatist party whose support has skyrocketed in Flanders; in Wallonia, right-wing politicians are asserting ties to France, and French National Front leader Marine Le Pen—who has compared Muslim immigration to Nazi occupation—said her country would welcome the Walloons “with pleasure.”

The crisis happens to fall during one of the Belgian soccer team’s best World Cup showings. The Red Devils won all of their group stage games and are favored to knock out the United States for a spot in the quarterfinals. The team’s success is providing a rallying point for the country, if only for a short time. The team is made up of players from both Flanders and Wallonia; as a Belgian journalist told Yahoo, “When the national team plays everyone gets behind them, everyone supports them…No one is thinking about politics when the team is playing. Everyone is together and united.”

Right now, there’s no scheduled vote on separation in Belgium—like the one happening in Scotland later this year—but the situation could escalate. So while Belgian fans will cheer on their Red Devils in Dutch and French today, when it’s time to fly home, those cheers just might turn into arguments.