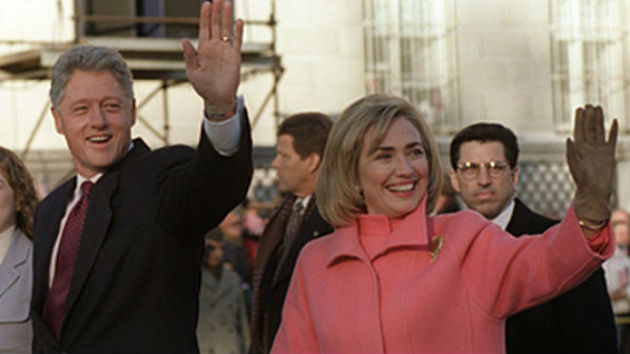 If the musical-theater community could find it in itself to create a cantata telling the story of a Twitter war between Paul Krugman and the president of Estonia, then surely a musical about the Clinton administration couldn’t have been that far behind.

On July 18, Clinton: The Musical will premiere at the Alice Griffin Jewel Box Theatre as part of the New York Musical Theatre Festival. (The festival has previously hosted such successful productions as Next to Normal and Altar Boyz, prior to their respective Broadway runs.) The book for Clinton was written by Australian writing duo and brothers Paul and Michael Hodge, and music and lyrics were penned by Paul Hodge. An earlier, shorter version was nominated for best new musical at the 2012 Edinburgh Festival Fringe, and a subsequent incarnation was mounted at London’s King’s Head Theatre the following year.

The idea for the musical emerged out of a Hodge family outing. “My family and I went to go and see a musical in Australia about an Australian politician, back in 2006 or 2007,” Paul Hodge tells Mother Jones. “And after the show, my dad said, ‘Oh, it was good, but politicians don’t make good subjects for musicals. The only politician who would make a good subject for that would be Bill Clinton.’ And I said, ‘Of course!'”

Clinton, a two-act musical satire, covers the eight years of Bill Clinton’s presidency. According to Paul, the music ranges from more traditional American musical styles to burlesque to 1990s pop. As for comedic influences, Paul cites Arrested Development, The Simpsons, and 30 Rock.

The cast of characters includes Bill, Hillary, Dick Morris, Newt Gingrich, Monica Lewinsky, and former Clinton special prosecutor Kenneth Starr. In the musical, President Clinton is portrayed by two actors: one plays the more serious, presidential side of Clinton, the other plays the party animal, scandal-prone Clinton. (Karl Kenzler, who played a senator on the US version of House of Cards, has the role of the less sleazy “W.J. Clinton”; Duke Lafoon, who also portrayed Clinton in Monica! The Musical!, a show by Daniel J. Blau, Adam Blau, and Tracie Potochnik, is the naughtier “Billy.”)

“Michael came up with idea that Clinton should be be two actors and two characters,” Paul says. “At first I said, ‘That’s the stupidest idea I’ve ever heard. But then I read Clinton’s autobiography, where he writes about sort of living two parallel lives. And then there was [Clinton adviser] Dick Morris who had [nick]names for him like, ‘Saturday Night Bill‘ and ‘Sunday Morning President Clinton.’ So then I thought that it was actually a really good device to explore a person who is so complex.”

Theatergoers should expect scenes and songs about health care, balanced budgets, the Gingrich-led government shutdowns, and the Lewinsky sex scandal. But don’t expect to hear any songs about Somalia, Rwanda, or Bosnia. “We made a decision to focus on domestic issues rather than foreign policy issues,” Paul says. “When you’re covering eight years of a presidency, the amount of stuff a president has to deal with on a day-to-day basis is enormous…So there will be no international stuff.”

As for the Lewinsky-related tunes, fans of ’90s pop should be pleased. “Monica’s music is more pop, in the direction of S Club 7 and Britney [Spears] and Christina Aguilera,” Paul says. His favorite numbers from the show are “Oh, Yeah,” one of Monica’s songs, and “A Starr is Born,” performed by the Ken Starr character.

Here is a clip, provided to Mother Jones, of one of the Clinton songs, this one simply titled, “No.” Bill and Hillary are forced to make changes to a speech to avoid any potential instance of sexual double entendre. The following audio was recorded during a special performance and press conference held in New York City on Wednesday:

Clinton has already earned itself a fair amount of attention, including from a member of another former first family. Jenna Bush Hager, who is a Today Show special correspondent, recently said on-air, “I just hope Bush: The Musical ain’t next.”

“Jenna can rest easy,” Paul says, adding that he can’t imagine himself ever writing a musical about the Bushes, or the Obamas, or the Carters, or the Reagans, for that matter. “The Clintons are the only ones I can see this working for!”

Clinton‘s festival performances are set to be held between July 18 and 26 (you can get tickets here). However, no word yet on whether anyone from the Clinton family will check it out. (The Clintons reside in New York, and Hillary served as a US senator from the Empire State from 2001 to 2009.) No one involved in the production has heard from Bill or Hillary, and representatives for the Clintons did not respond to Mother Jones‘ requests for comment regarding the musical or potential attendance.

“Being Australian, I’m neither Republican or Democrat, so I don’t come at this from any political standpoint or agenda,” Paul says. “I come at this looking at [the Clintons] as human beings.”

Now, for any hardcore musical fans out there, here’s a taste of Clinton sheet music—for a song titled, “Sexual Relations,” no less: