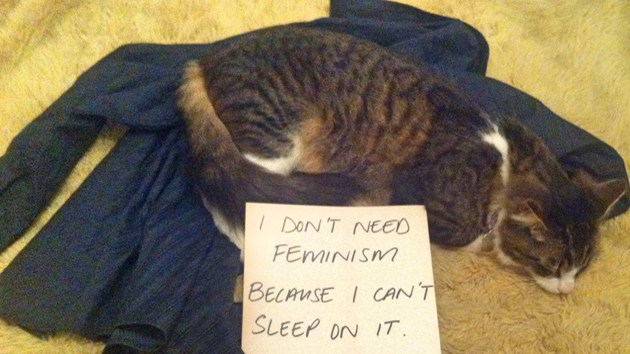 The Tumblr Women Against Feminism has inspired scores of think pieces decrying its misuse of the term “feminist.” Yet when David Futrelle saw the collection of photos of women holding handwritten signs like “I don’t need feminism because I am not a victim,” it reminded him of his cats.

“It just seems like cats never know what’s going on,” Futrelle says. “If anyone would get really confused about feminism and announce their opposition to it, it would be cats. They have the right combination of myopicness and solipsism.”

So last Thursday, Futrelle posed his felines next to Women Against Feminism-style signs, snapped a picture, and launched his own Tumblr: Confused Cats Against Feminism. The cats, he said, were reluctant participants. “They did not want to cooperate at all when I started coming at them with this little sign that I’d drawn on with a very smelly Sharpie.”

Almost immediately, readers began sending Futrelle photos of their own cats. Now the Tumblr has 11,000 followers, and as of Tuesday morning, Futrelle was sorting through hundred of submissions. 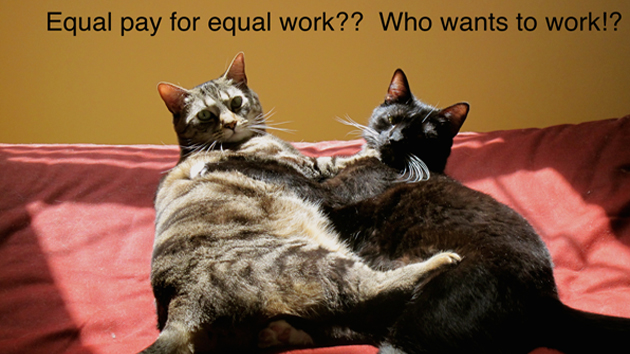 The Chicago resident thinks his project taps a deep vein of exasperation among feminists that goes beyond the outrage over Women Against Feminism. “A lot of women and feminists are frustrated at trying to respond to arguments that are disingenuous or just weird and silly,” he says. “Part of what’s fun about the blog is to say, Look, we’re just gonna respond with cats.”

The most successful posts, he says, “manage to tap into cat logic” or “capture the cats’ desire to be pampered and protected, which is the complaint that some people have about the Women Against Feminism blog.” His favorite submission so far is a cat sprawling on its back, exposing a patch of fur the size and color of a chocolate chip cookie on its stomach. “I DON’T NEED FEMINISM BECAUSE…COOKIE BELLY,” the text reads.

Futrelle says the joke wouldn’t be as funny if it were Confused Dogs Against Feminism, because cats tend to be culturally coded as female. Also, “Dogs aren’t as self-absorbed as cats. If you tried to do it with a dog I think the only thing you could go with is they’re too stupid.” 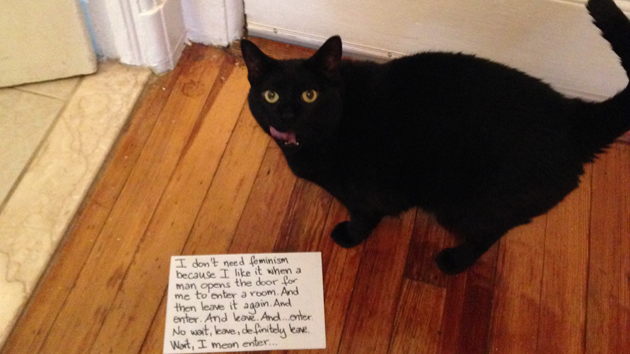 “I don’t need feminism because I like it when a man opens the door for me to enter a room. And then leave it again. And enter. And leave. And… enter. No wait, leave, definitely leave. Wait, I mean enter…” confusedcatsagainstfeminism.tumblr.com

This isn’t Futrelle’s first attempt to push back against antifeminist rhetoric. On his other blog, We Hunted the Mammoth, he’s been chronicling the foibles of the men’s rights movement for four years. Over time he’s shifted from seeing the movement as merely misguided to realizing that it’s driven by misogyny, he says. He hopes his blogging will encourage other people to respond to antifeminist overtures with humor.