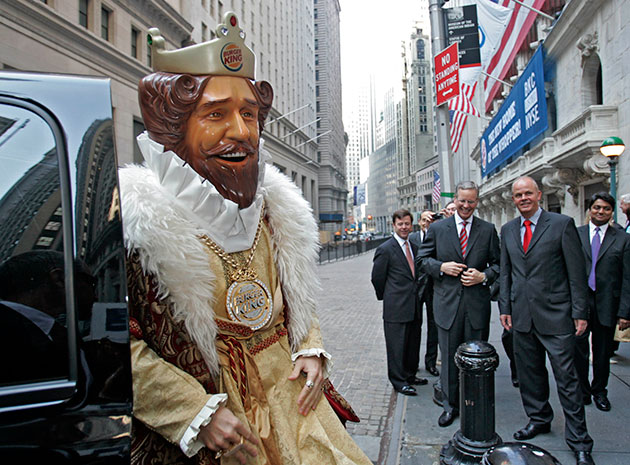 Last year, according to a new analysis from the Economic Policy Institute (EPI), the CEOs of America’s top 25 restaurant corporations, including McDonald’s, Burger King, the Cheesecake Factory, Chipotle, and Jack in the Box, took home an average of 721 times the money minimum-wage workers did, and 194 times the take-home pay of the typical American worker in a production or nonsupervisory job. Restaurants and food services employ nearly half of all American workers who earn the federal minimum wage of $7.25 per hour (or less).

The report “confirms what we have long known,” Cherri Delesline, a McDonald’s crew member and mother of four in Charleston, South Carolina, told Mother Jones. Since November 2012, she and hundreds of other fast-food workers have gone on strike in 150 American cities and 80 foreign cities, demanding they be paid $15 per hour. “While CEOs make millions of dollars in profits, we still can’t afford to pay our rent or buy clothes for our children,” says Delesline, whose hourly pay is $7.35.

“It’s a picture of uncontrolled greed,” EPI vice president Ross Eisenbrey says. “How can it be that the CEOs are making more in half a day than many of their workers are making in an entire year—and yet they can’t afford to raise the pay of those workers?” CEO pay has been out of control across all business sectors since at least the late-1980s, he adds. From 1978 to 2013, for instance, average CEO compensation, adjusted for inflation, soared nearly 1,000 percent, while the typical worker’s pay increased by just over 10 percent.

Roughly 1 in 10 American workers are employed by restaurants, according to the National Restaurant Association. The industry, the trade group predicts, will see $683 billion in sales this year—up 17 percent over 2010. But a greater share of those revenues has been flowing to top executives. As this interactive graph shows, CEO compensation at America’s top restaurant chains has ballooned since 2008, while the annual take of their lowest-paid workers has largely flatlined. (This analysis assumes tipped workers reach the federal minimum wage through base pay and tips, although that isn’t always the case, as we’ve reported previously.)

While the recent strikes have pressured a few chains to consider raising their wages, some executives argue that raising pay would hurt business, and franchise owners say their thin profit margins can’t bear any increases. Just last week, Andy Puzder, CEO of the conglomerate that owns Carl’s Jr. and Hardee’s, told Yahoo Finance that raising the federal minimum would force companies like his to raise prices and ultimately reduce job opportunities for young and inexperienced workers. You can’t solve the problem, he said, “by having the government artificially mandate a wage increase when there’s no economic growth to support that.”

Puzder—whose compensation totaled nearly $4.5 million in 2012, or 294 times what minimum-wage workers made that year—claimed that “if government gets out of the way, businesses will create jobs…Wages will go up and the country will go back to a state of prosperity instead of what we’re in now.”

Actually, the financial information company Sageworks reports that the restaurant industry fared pretty well during the recession, growing at about 5 percent annually since 2009. And the majority of fast-food workers aren’t teenagers: More than 60 percent are 20 or older, according to the Center for Economic and Policy Research. As Huffington Post‘s Jillian Berman points out, more adults are working in fast food not because they can live off the wages, but simply because they have no better alternatives.

Meanwhile, a new study finds that 61 percent of small business owners favor a minimum wage hike to keep pace with cost of living, supporting previous findings on the topic. Some national retail companies, such as Ikea and Gap, have also chosen to raise their starting wage. Likewise wholesale merchandiser Costco, where entry-level employees get $11.50 an hour. “We know it’s a lot more profitable in the long term to minimize employee turnover and maximize employee productivity, commitment, and loyalty,” CEO Craig Jelinek said in a statement supporting of a bill that would raise the federal minimum wage—to just over $10.

Here’s a list of the 25 CEOs EPI analyzed, and what they made last year.