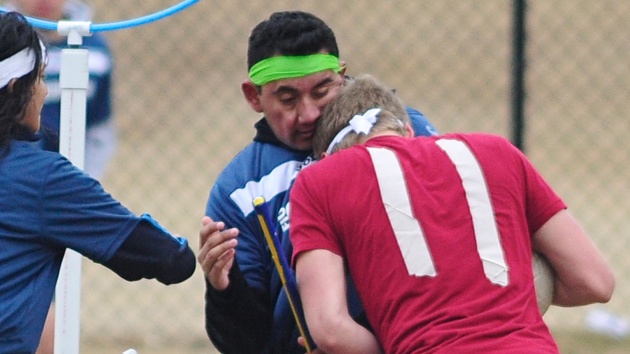 If you want to make it as a snitch in the fast-growing sport of muggle quidditch, there are a few simple rules to live by. Keep the two people with yellow headbands in your sight at all times. Call fouls when you see them. Don’t let your showboating get in the way of your performance. And keep your booty shaking. “You gotta do a little duck waddle—stick your butt out,” advises Austin Nuckols, a lanky University of Richmond student with curly hair in a Spiderman-inspired quidditch jersey. “That’s right, get a little twerk going,” he says. “Work on your twerk!”

Nuckols in offering a tutorial in snitching in a back room at a convention center in downtown DC for the second day of the third annual QuidCon, the only convention focused on the nuts and bolts of starting or managing a quidditch team. Conceived eight years ago by a small group of students at Middlebury College in Vermont, the International Quidditch Association now boasts 225 official teams in at least 13 countries, in addition to wheelchair quidditch and several varieties of “kidditch.” Even as the Harry Potter books and movies that first popularized it fade from view, the sport has begun to find its legs.

But like angsty, teenage Harry Potter in book five, competitive quidditch is finding that its new powers come with some growing pains—in the most literal sense. Muggle quidditch has a concussion problem.

The problem stems from the often intense physicality of the sport that is still working out the kinks. Quidditch, by virtue of its origins, attracts a large number of people with minimal experience in contact sports. It also attracts a large number of people who think they know how to act in a contact sport. “A lot of our players come to us from football so they think that a tackle looks a certain way,” says IQA commissioner Alex Benepe.

But football form tackles are built for a game with padding and helmets, of which quidditch has neither. The sport follows the rules outlined in the series, except instead of flying through the air on broomsticks, competitors run with broomsticks between their legs, and instead of magical snitches, people like Austin (under a controversial new rule) have to stay on the field and wrestle with seekers instead. The game is a frenetic mix of dodgeball, rugby, wrestling, and that Aztec game where everyone died at the end.

The result: There were 40 concussions at the April World Cup in South Carolina alone. The concussion issue is one reason why some schools don’t allow quidditch as an intramural sport. Boston University’s club program lost its school funding last year because it was deemed too dangerous. Even Benepe is guilty of using injuries to sell the sport. Among a list of incentives he offered in a post promoting the 2011 cup: Injuries. “Last year’s medical report included a few fractures, concussions, and even a bee sting,” he wrote. “There’s nothing more bad-ass than being asked about a scar and saying, ‘Oh, that? Got it playing quidditch.'”

Everyone has a story. “I saw a flash of light,” says Rebecca Martin, the IQA’s safety coordinator, recalling a quidditch concussion she suffered on her 21st birthday after getting bludgeoned with a playground ball. When it happened, her mind wandered to the deadly Avada Kadavra curse from the books. “My first thought was, ‘Why isn’t that flash of light green? Am I dead?'”

Wary of going the way of the NFL or FIFA, though, the IQA is hunkering down. This year it has provided liability and accident coverage, and mandated concussion baseline testing before every major tournament. Every participant takes a concussion test before the first game; anyone who may have had a concussion during the game then gets a test to compare it to. Some club teams have begun to implement similar procedures.

It took football decades for techniques and safety precautions to catch up to the thrill of the competition (if it ever has); early plays like the flying wedge literally left a trail of dead on the field. Benepe, one of two full-time IQA employees, is hoping to avoid that. He wants to bring on a tackle specialist to work with teams, analyze quidditch techniques, and give the league some sort of foundation this year. “If we have to hire a specialist, we will,” he says. “But we’d like to do it pro bono.”

Safety is just one of several areas where quidditch is in the midst of a makeover. It’s also looking to shed its popular associations with Harry Potter and succeed on its merits.

“I think we will always have our roots,” says Alicia Radford, IQA’s COO, when I ask about Potter. “But the most important reason for the sport’s long-term success is the game.” She estimates that only about half of the players who attended the World Cup were real Hogwarts die-hards.

The entire IQA page only makes one reference to the series–its gender-equity policy, Title 9 ¾, a play on the federal law that requires equal scholarship opportunities for male and female athletes. The IQA’s is more progressive, though. “Title IX additionally continues to exclude those who do not identify with the binary gender system,” it notes. “Through Title 9 ¾, the IQA is more inclusive to trans* individuals by using gender as opposed to sex in policies. We understand that the process of transition is a very personal (and expensive) decision, and is influenced by many factors, none of which are, or should be, because a sport requires it.”

But it hasn’t totally abandoned its roots. After lunch, I stop by a session called “That Harry Potter Guy,” which I anticipated would continue along the theme of combating quidditch stereotypes on campus, but in fact turns out to be a discussion group about That Guy, Harry Potter. We sit in the circle and come to a basic consensus on whether Dumbledore could have made everyone’s lives easier if he’d been a bit more upfront about things. “He puts a lot of this himself,” says a guy in a lime-green t-shirt that says “some athlete run, other athletes fly,” eating a salad out of a box. Other questions considered include “How long did Dumbledore know about the horcruxes?” (Since Voldemort was a student) and “Do they sort too soon?” (Maybe, but there’s still agency.)

The analysis of the Hogwarts sorting system flows effortlessly into an undergraduate discourse on identity. “I do think that Harry just got stuck with a bad group of Slytherins,” says Micah Haji-Sheikh, a Chicagoan who plays for the University of Missouri and confesses to role-playing Narcissa Malfoy, the mother of Harry’s Hogwarts rival, on Tumblr. Someone notes that everyone at Hogwarts either marries immediately after graduation or dies alone, which everyone agrees is kind of depressing but, also, life, and then finally, a young woman I spend the rest of the day avoiding volunteers something that has been bugging her: “For a horcrux, to get immortality, all you need to do is kill someone? Am I the only one who thinks that’s a good deal?”

Amber Cummings, a member of the US Quidditch Association rules committee who plays on a team in Richmond, briefly blanks on the name of a quidditch player in the books, before recovering—it’s Viktor Krum.