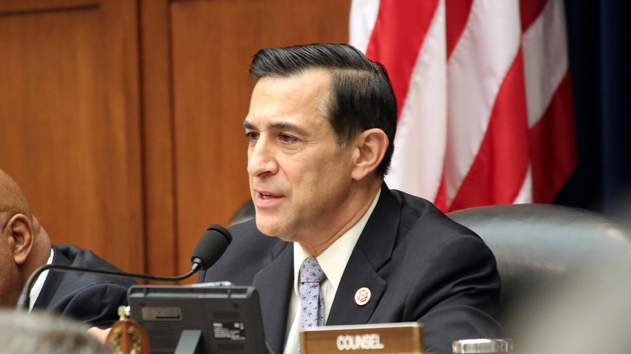 Sen. Jay Rockefeller (D-W. Va.) has accused House oversight committee chairman Darrell Issa (R-Calif.) of inappropriately intervening in an ongoing Federal Trade Commission case against a company being represented by a legal group run by a former Issa staffer. Last month, Issa sent a letter to the FTC questioning testimony the agency had gathered for the case, which targets a medical testing company called LabMD. The firm allegedly exposed the personal data of almost 10,000 people. On Thursday morning, Issa’s committee held a hearing that featured LabMD CEO Michael Daugherty and focused on whether the FTC has overstepped its bounds by investigating companies that experience data breaches.

“You [are] using heavy-handed, bullying tactics to undermine due process and to inappropriately assist the defendant LabMD,” Rockefeller wrote in a recent letter to Issa, which was obtained by Mother Jones. “The inappropriate timing and nature of your investigation are buttressed by the revelation that LabMD is being represented by a former member of your committee staff.” Rockefeller was referring to Daniel Epstein, who from January 2009 to August 2011 served as an oversight committee counsel. Epstein now heads a nonprofit legal advocacy group called Cause of Action, which is representing LabMD in the FTC matter.

Asked to respond to Rockefeller’s letter, Issa spokeswoman Becca Watkins notes that Epstein “is not a personal attorney but is instead with a nonprofit legal organization.” (Politico reports that Epstein is “listed as LabMD’s counsel on a number of legal documents.”) Watkins did not respond directly to Rockefeller’s suggestion that Issa was pursuing this inquiry because of the staffer connection. Watkins adds, “Senator Rockefeller is completely distorting the committee’s work.” Cause of Action did not respond to multiple requests for comment.

“The inappropriate timing and nature of your investigation are buttressed by the revelation that LabMD is being represented by a former member of your committee staff.”

In August 2013, the FTC filed a complaint against LabMD. The agency alleged that the firm failed to protect sensitive consumer data, that the billing information of 9,000 people ended up on a public file-sharing network, and that identity thieves seized sensitive information from at least 500 people as a result. At the hearing on Thursday, Rep. Elijah Cummings , the ranking Democrat on the committee, pointed out that Daugherty has referred to the FTC as “terrorists” and accused the agency of “administering government chemotherapy.”

As it has fought against the FTC complaint, LabMD has enlisted Issa as an ally. In June, Issa sent the FTC a letter and contended that testimony provided against LabMD by Tiversa, a cybersecurity company, “may not have been truthful” and is “incomplete and inaccurate.” LabMD has submitted this letter as evidence in the case. At the hearing, Cummings said that the committee has received “no evidence” to corroborate allegations that Tiversa intentionally falsified data to the FTC.

Rockefeller, who is active on data privacy issues, maintains that Issa’s letter and Dan Epstein’s involvement in the case raise “the question of whether LabMD directly sought [Issa’s] help and intervention in the legal process rather than take the risk of losing on the merits at trial.” Hudson Kingston, ‎legal director at the Center for Digital Democracy, which is tracking the LabMD case, says that Issa’s “hearing is happening after the FTC started a case against a company, and it’s being used to slow down and interrupt that process. That’s not normally how Congress works.” According to a congressional staffer, “it is highly unusual for Congress to intervene directly in an ongoing case, particularly on behalf of one particular party in that case.”

July 24, 3:25 PM EDT: In a statement sent to reporters, Bob Boback, CEO of Tiversa writes that, “It would better if the Committee focused on helping consumers fight cybercrime instead of influencing private litigation with the FTC.”