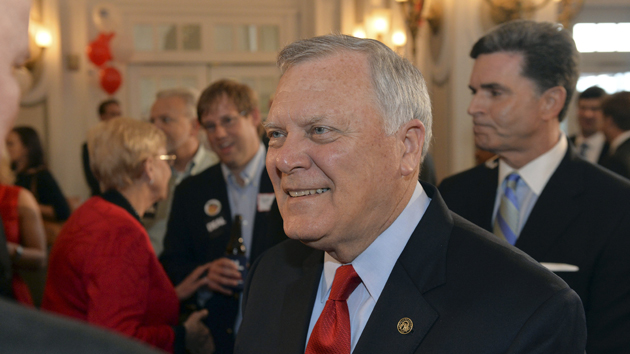 Could a Carter from Georgia once again win because of a scandal-plagued Republican? Democrat Jason Carter—grandson of former President Jimmy Carter—is challenging first-term Georgia Gov. Nathan Deal this fall, and the incumbent Republican is facing an ethics controversy that could imperil his reelection chances.

Deal has been embroiled for years in a low-grade scandal regarding allegations that his staff smothered a state ethics investigation of his campaign finances. But the controversy has recently heated up. This spring, a former head of the state’s ethics commission won a lawsuit in which she claimed that she was improperly pushed out of her job for digging into Deal’s campaign. Her replacement—fearing that she might also be jettisoned from the commission—has now come forward and alleged that the governor’s aides tried to interfere with the ethics commission.

Last week, the Atlanta Journal-Constitution reported that in July 2012 Holly LaBerge, the current head of the state’s ethics commission, wrote a memo outlining political intimidation by Deal’s staff. In the memo, she noted that the governor’s top lawyer, Ryan Teague threatened to strip her agency of its rulemaking authority in order to deep-six the investigation of Deal’s 2010 gubernatorial campaign. LaBerge’s memo also said that Deal’s chief of staff, Chris Riley, pressured her to close the matter, which the commission eventually did. “I was mad that the governor’s legal counsel thought he could call me up and threaten me and threaten my agency,” LaBerge told the local Fox station.

The FBI and the state inspector general have been reviewing the ethics commission’s activities, and LaBerge’s attorney said the ethics chief would want whistleblower protections for her cooperation. If she is granted protection, she might be in the position to disclose more about this episode, and Deal could face more damaging stories.

Deal’s ethics commission troubles date back to 2011. Then LaBerge’s predecessor, Stacey Kalberman, and Kalberman’s deputy, Sherilyn Streicker, began examining Deal’s 2010 campaign spending. They suspected that Deal, who had served nine terms in Congress before running for governor, might have improperly directed campaign funds to businesses to which he had ties. Kalberman and Streicker alerted the ethics panel’s five commissioners of their intention to issue subpoenas for information. The commissioners responded by slashing Kalberman’s salary by $35,000, effectively forcing her out, and eliminating Streicker’s job.*

This April, a jury sided with Kalberman in a lawsuit claiming that she was targeted for political retribution, granting her $700,000 in compensation. (The case ended up costing the state over $1.1 million, including legal fees.) “I always knew it was about somebody’s desire to quash the Deal investigation,” Kalberman told the local NBC affiliate, after the case concluded.

Once Kalberman left the state ethics commission in 2011, LaBerge filled the post. She was chosen at the suggestion of Deal’s chief lawyer. At the alleged urging of Deal’s staff, LaBerge—who would later complain of being strong-armed—quickly dispensed with the investigation Kalberman had initiated, and the commission dismissed the case against Deal, with the governor’s campaign agreeing to pay a mere $3,350 for minor filing problems.

Deal has denied any wrongdoing on the part of his aides. “They were simply urging the [ethics commission] staff to proceed in a timely fashion,” the governor told the Atlanta Journal-Constitution.

Prior to the state ethics commission’s quashed inquiry, Deal had another run-in with government watchdogs. In 2010, when Deal was a congressman, the Office of Congressional Ethics—an independent, bipartisan panel—examined allegations that he had used his House seat to benefit his family business, Gainesville Storage & Disposal. Deal denied abusing his power, calling the investigation a “politically motivated witch hunt.” But the congressional ethics panel found that Deal had failed to disclose $75,000 in wages from a car salvage company—violating congressional limits on outside income.

The congressional investigation also charged that Deal exploited his position to dissuade state officials from changing an automobile inspection program in a way that would harm his business. “It is undisputed that as a ‘public servant,’ Representative Deal took active steps to preserve a purely state program, one that had generated financial benefit for Representative Deal and his business partner,” the panel’s report said. Deal resigned right before the House ethics committee’s deadline for taking action and ran for governor—and the inquiry came to an end.

Georgia voters didn’t place too much stock in Deal’s House-era ethics troubles, electing him governor with 53 percent of the vote in 2010. But polls show they might not be so forgiving the second time he claims innocence. RealClearPolitics’ average of polls has Deal up by just 1.7 percent. A poll conducted last week by Landmark Communications for a local TV station, the first since LaBerge’s memo became public, put Carter ahead with an 8-point advantage. Deal is clearly in a tight race, and he surely won’t be helped if the Case of the Smothered Ethics Investigation becomes a full-fledged scandal.

Correction: An earlier version of this article incorrectly said that Deal had appointed a majority of the commissioners when Kalberman’s salary was cut.