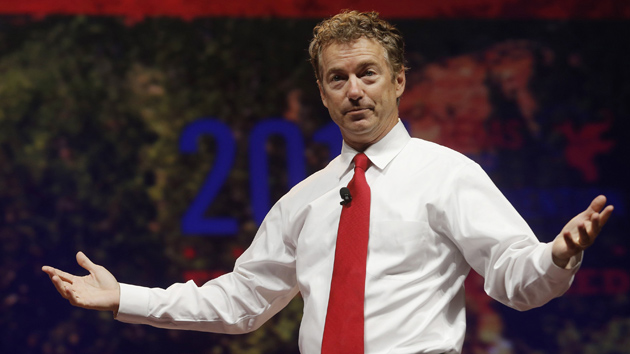 Sen. Rand Paul (R-Ky.) says the minimum wage, like Trix, is for kids. Speaking in San Francisco over the weekend, the likely 2016 presidential candidate took issue with the president and first lady over an interview they gave to Parade, in which the Obamas suggested their daughters should work minimum wage jobs because “that’s what most folks go through every single day.” It was a fairly innocuous comment. But Paul argued it sent the wrong message. Per Politico:

Speaking at a downtown conference for libertarian and conservative technology types, the Kentucky Republican and prospective 2016 White House contender said he had an “opposite” view from the Obamas when it comes to seeing his own sons work delivering pizzas and at call centers.

“The minimum wage is a temporary” thing, Paul said. “It’s a chance to get started. I see my son come home with his tips. And he’s got cash in his hand and he’s proud of himself. I don’t want him to stop there. But he’s working and he’s understanding the value of work. We shouldn’t disparage that.”

Paul, a libertarian, was echoing the argument made by those who oppose raising the minimum wage: That those jobs are largely filled by young adults just entering the job market—people who are taking these low-paying positions before moving on to the better-paying jobs—so it’s no big deal if the compensation is at the bottom end of the scale. A low wage might even be beneficial, by providing an incentive to get to the next level. But this is not supported by the facts. Only a quarter of minimum wage workers are teenagers, according to the Bureau of Labor Statistics. Nearly half of minimum wage earners are over 25, and 585,000 (18 percent) are over 45. These aren’t kids just learning the value of the buck; they’re adults who need income to support themselves and their families. As Mother Jones has reported previously, the current minimum wage doesn’t come close to doing that. Just take a spin on our living-wage calculator.

If Paul truly believes a low wage is “temporary” for most minimum-wage workers, perhaps he should take the Obamas’ advice for their daughters and spend some time working in a fast-food joint.