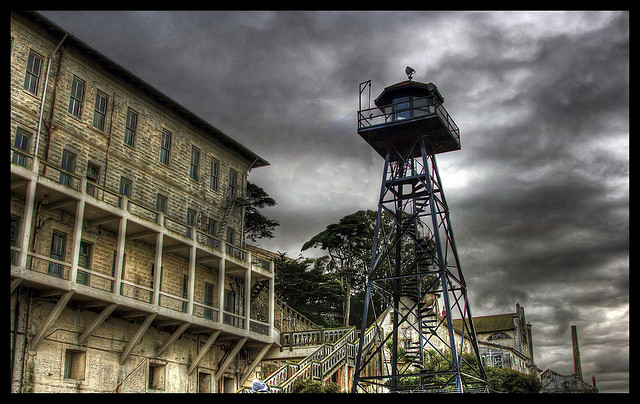 I’ve dealt with surly, armed prison guards in my reporting career, but Tuesday was the first time the encounter involved a PR man kicking me out of a convention I had personally requested to attend, paid for, and traveled across country to attend. On Tuesday, the director of government and public affairs of the American Correctional Association (ACA), a prison trade group, pulled me out of a seminar at their conference in Salt Lake City, which I’d been attending for several days. Flanking him were two men in Utah Department of Corrections uniforms, with pistols and tasers on their hips.

The convention is a twice-yearly affair, and I’ve been to it before. Hundreds of prison staff and members of the vast industry surrounding corrections touch down on an American city to discuss all things prison related. This week, Salt Lake City laid out the red carpet. Downtown restaurants posted signs welcoming the prison industry. Hotels printed the ACA insignia on their keys. Bars hosted parties sponsored by corrections companies. The local prison had inmates press an “ACA 2014” license plate for each convention guest.

The ACA is the largest and oldest correctional association in the world, and their conventions offer a rare glimpse into the world of US prisons. Vendors in the exhibit hall openly discuss their increasing sales of SWAT-style equipment to prisons. Visitors can check out the new tech like drone-detection devices, surveillance systems, and shank-proof e-cigarettes. People hold workshops on issues like sex between prison guards and inmates and the problem of drug-dealing staff. Serious topics like suicide among transgender inmate populations are often revealingly discussed in terms of liability and cost.

But in attending ACA conventions, I’ve also been surprised at how many reformists there are. When I attended an ACA convention in Tampa six months ago, the main plenary was composed of wardens and mental-health workers discussing the need to reform the use of long-term solitary confinement (called “restrictive housing” in ACA jargon). In Salt Lake City, prisoner mental health and the rampant problem of hepatitis C (affecting 40 percent of inmates) were major topics.

For someone who writes about prisons and is accustomed to being stonewalled at every turn, the ACA conventions have felt refreshingly transparent. After workshops or at company-sponsored meet-and-greets, most people are very willing to speak to a journalist, and I have always identified myself as such.

While in Salt Lake City, I was live-tweeting throughout the convention, posting revealing tidbits from workshops and notes on a visit to a local jail. This may have had something to do with why, on the fourth day, a man named Eric Schultz, the ACA’s director of government and public affairs, came into a workshop and asked me to step outside. Standing at each side of him was an armed Utah correctional officer. He told me I was going to have to leave.

The guards ushered us into an empty room. The reason for my dismissal changed as Mr. Schultz and I talked. First, he told me I wasn’t registered as media. I explained to him that when I called to register, I was told there were no media passes, and that I should register through the normal channels. He then told me the problem was that I wasn’t displaying my Mother Jones credentials, which was required by policy (I still have not been able to find that policy). I told him that could easily be remedied. “It’s nothing against you or Mother Jones,” he said. “But you are just going to have to leave.” The burly guard stepped in closer.

After I left the convention center, I called the main ACA office in Virginia to ask again whether media were allowed to attend the convention. The man who answered told me yes, they were.

“Yes,” he said. My editor, Monika Bauerlein, called Eric Schultz several times to discuss the matter, leaving voicemails and receiving no return calls. I later called up Schultz to ask whether he wanted to comment for this post. He hasn’t responded.

The ACA functions as the de facto oversight organization for our prison system. They set the professional standards and conduct audits. I’ve been told by many that their accreditation carries weight in court. What are we to infer when an institution whose purpose is to make sure our prisons are up to par doesn’t allow the public to see what it’s doing?