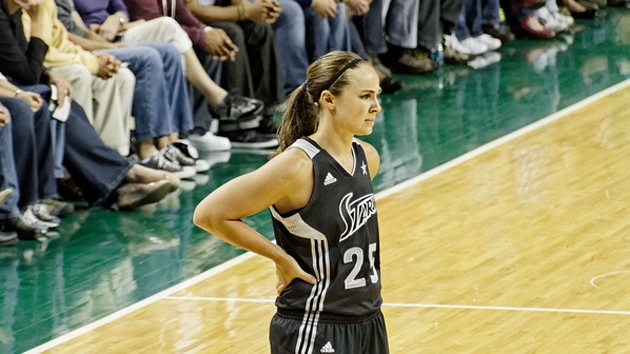 The San Antonio Spurs confirmed today what was already clear: The NBA is, by far, the most progressive Big Four sports league when it comes to gender equity. The team announced the hiring of Becky Hammon, a six-time All-Star with the WNBA’s San Antonio Stars, as an assistant coach. When the season tips off this fall, she’ll be the first woman on the coaching bench in NBA history.

Women have held other (and less formal) jobs on NBA staffs before, but Hammon, 37, will become the first full-time female coach. It makes sense that the Spurs are at the forefront, given the recently crowned NBA champs’ history of innovative, progressive leadership. (They lead the league in international players, for example.) And it further boosts a newsworthy summer for women in the NBA: In addition to Hammon’s hiring, the basketball players’ union named lawyer Michele Roberts as its executive director.

Notably, the Institute for Diversity and Ethics in Sport (TIDES) named the NBA the leading sports league for gender diversity in its annual report, adding that while women aren’t as represented as they could be, the league still handily beat MLB and the NFL. Forty percent of the NBA’s league office is staffed by women, helping it earn a B+ grade from TIDES. (The MLB and NFL got C+ and C grades, respectively.)

So why is basketball so far ahead of the other leagues? Slate‘s Amanda Hess suggests that it could be because, unlike football and baseball, women actually play basketball—and they’re good at it. From the NCAA to the WNBA (which the NBA created in 1996) to the Olympics, we’re used to seeing women like Hammon excel on the court. On the other hand, female engagement in the NFL stops at the sidelines, where cheerleaders are routinely degraded by team organizations.

Hess also argues that part of the NBA’s commitment to gender equity stems from the view of former commissioner David Stern, who was instrumental in shaping the league into the powerhouse it is today. Stern is a noted liberal, for one, but also a shrewd businessman; he figured that making women essential to the league would boost the its bottom line. To an extent, it did: Stern argued that the WNBA initiatives helped to expand the NBA’s female audience, even though it still lags behind the NFL’s.

Today’s decision from the Spurs, however, seems to disregard any business calculus. The best candidate for the job was hired, and she’s a woman.