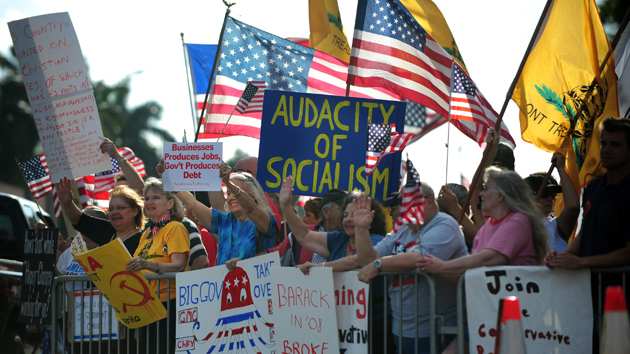 Tea party protesters wave to passing cars on April 15, 2010, in front of the US federal courthouse in Fort Lauderdale, Florida.Sun-Sentinel/Zuma

Americans for Prosperity, the dark-money-funded advocacy group founded by Charles and David Koch, rose to prominence in 2009 and 2010 on the back of the white-hot tea party movement. But today, even though Republicans stand a good chance of retaking the Senate and the conservative fringe has hijacked the House’s efforts to pass immigration reform, the tea party grassroots is withering away, according to a confidential AFP memo obtained by Mother Jones.

The internal AFP memo was written in April by Jason Cline, an Arkansas political consultant who left the state’s influential AFP chapter this spring. It’s clear from the memo that Cline clashed with higher-ups in AFP’s national office, including Teresa Oelke, a former AFP-Arkansas director who now is AFP’s vice president of state operations. In the memo, Cline responds to various allegations leveled against him by Oelke and others, including that Cline was “sexist toward women,” “prejudiced against old people,” and mismanaged AFP-Arkansas.

Cline writes in response that he was not biased against elderly activists but rather sought out younger activists for AFP-Arkansas due to a dropoff in support among older tea party followers. He explains:

We have a declining tea party engagement and we need to engage new forms of activists. The comment [made by Cline to a fellow activist] was specifically, ‘These old people are not gonna get it done. These kids are workers.’ Not in the sense that they can’t accomplish it, but that there are too few of them.

The problem of declining support from older tea partiers, Cline continues, is a national problem:

On my very first phone call with Jen Stefano as my new [AFP] regional director, I asked her if declining tea party engagement was just an Arkansas problem or if everyone was experiencing that. Her comment was that it’s a problem everywhere.

At the time, Cline and Stefano were prominent figures within AFP. As the director of AFP-Arkansas, Cline led one of AFP’s strongest chapters. Stefano is a national regional director for AFP and a fixture on Fox News and Fox Business News. If they believe tea party support is drying up, the problem is probably real. AFP spokesman Levi Russell declined to comment, and Stefano did not respond to a request for comment.

This year’s primary season has borne out Cline and Stefano’s observations. Unlike 2010 and 2012, when tea party favorites Mike Lee and Ted Cruz ousted establishment Republicans, the 2014 Senate primary season has seen the defeat of every single tea-party-aligned challenger. The major surprise of this election cycle has been economics professor David Brat’s victory over then-House Majority Leader Eric Cantor (R-Va.). Yet neither AFP or FreedomWorks, the two major national tea party groups, spent money to elect Brat.

Of course, establishment Republicans won in 2014 in part because they tacked hard to the right in anticipation of a tea party challenge. Likewise, the Republican Party has become more hardline in the past five years. The tea party, then, has won an ideological victory. But as a source of manpower on the ground, the movement is no longer what it once was.

Read Cline’s 19-page memo below (some personal information has been redacted):