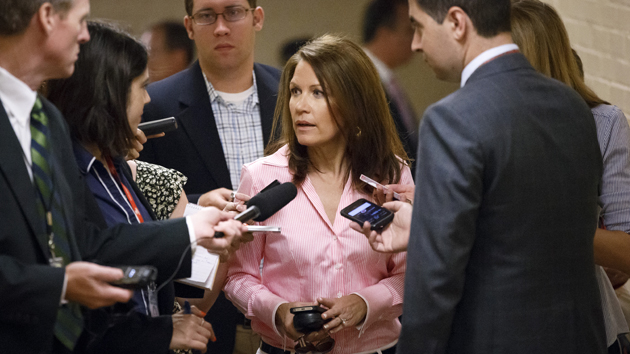 Impeachmania peaked last week. After the House approved Speaker John Boehner’s lawsuit alleging executive overreach by President Barack Obama, Democrats pounced, blanketing the media and donors’ inboxes with dire warnings that Republicans would soon resort to impeachment. Boehner, for his part, dismissed the hysterics as a fundraising ploy. “It’s all a scam started by the Democrats at the White House,” he said last week, vowing that the House had no intention to begin impeachment hearings while he still held the speaker’s gavel. But Boehner’s control over his unruly tea-party-tinged caucus has proved tenuous time and again, and Rep. Michele Bachmann (R-Minn.), the unofficial leader of the Impeach Obama Caucus, has floated a new (and no less quixotic) solution: If Boehner won’t let the GOP caucus impeach the president himself, Republicans should begin impeachment proceedings against members of Obama’s cabinet in his stead.

“I don’t think that John Boehner is going to bring about impeachment, which I understand, because what we really need is to remove Barack Obama from office, and the Senate has the power to remove the president, not the House,” Bachmann told activists on a call last Tuesday hosted by the anti-immigration group NumbersUSA. “The Senate is not going to remove him. So all we would do is effectively make the president a political martyr by impeaching him.” Instead, Bachmann suggested, the Senate might be more willing to take up articles of impeachment against the lower-level officials who follow Obama’s executive orders granting temporary reprieves from deportation to undocumented immigrants (why, exactly, Senate Democrats would be more amenable to this cause was left unclear). “For instance, I would nominate [impeaching] the head of Homeland Security who will execute the laws on the border,” she said, referring to Secretary of Homeland Security Jeh Johnson. “I think that we need to have a hearing, and we need to, if need be, bring about articles of impeachment and tell the president that if you issue these work permits, we are going to hold the person accountable who is going to execute your lawless law, and we will bring that person up for betrayal of public trust and we’ll impeach that official.”

Bachmann has been on the impeachment bandwagon for a while—in October, she called Obama a dictator and said “the president has committed impeachable offenses”—but using the articles of impeachment to oust Obama’s cabinet appointees is a new tactic. Bachmann’s tea party BFF Rep. Steve King (R-Iowa) hasn’t quite ditched the idea of bringing impeachment charges against Obama, though, reiterating his possible support for such a move Sunday on Fox News.

In addition to hearings on cabinet officials, Bachmann said she wants to “defund” Obama of the money he needs to operate the government. That threat is particularly urgent, with Congress needing to pass new spending measures by the end of September or else face another government shutdown.

The current source of Bachmann’s outrage stems from Obama’s decision to exempt young, undocumented immigrants from deportation, and the possibility that the president may soon expand this initiative to a larger swath of the undocumented (the president has hinted that he may soon sign an executive order to that effect). To Bachmann, that is just sneaky political maneuvering to increase Obama’s appeal with Latino voters and expand the Democratic base. “I hate to say this, but we have a terrible president,” she said. “He is evidencing that he doesn’t care about veterans, he doesn’t care about the American people. But what he does care about is having you and me paying for his voter registration drive so that his party will be a permanent party in every presidential election in the future, and in midterms.”