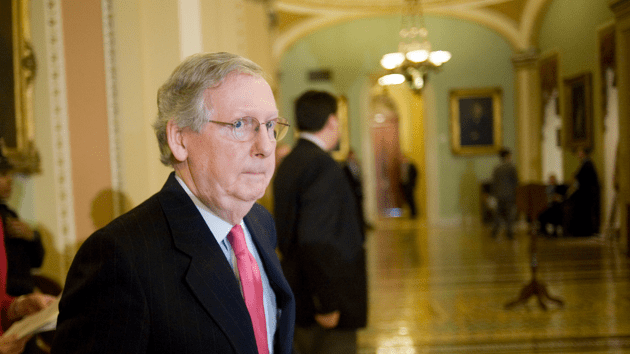 For weeks, Republicans in the Senate have held up an $180 billion spending bill that would direct money to several federal agencies, from the Justice Department to the Department of Transportation. Funding for all kinds of measures—from rent subsidies for the poor, to a new NASA rocket, to transportation projects—has been left in limbo. But one specific provision that’s being held up has victims’ advocates particularly worried: a $41 million grant to help states and localities go after rapists by funding jurisdictions to process backlogs of rape kits, the samplings of biological evidence that are taken after a sexual assault and used to identify attackers.

The kits, which contain semen, blood, saliva, hair, and other DNA evidence from rape victims, can be held in storage for decades, allowing rapists to roam free. Experts estimate that there are over 100,000 untested kits sitting on shelves at scores of police departments and crime lab storage facilities around the country, partly because states and localities lack the money needed to process them. 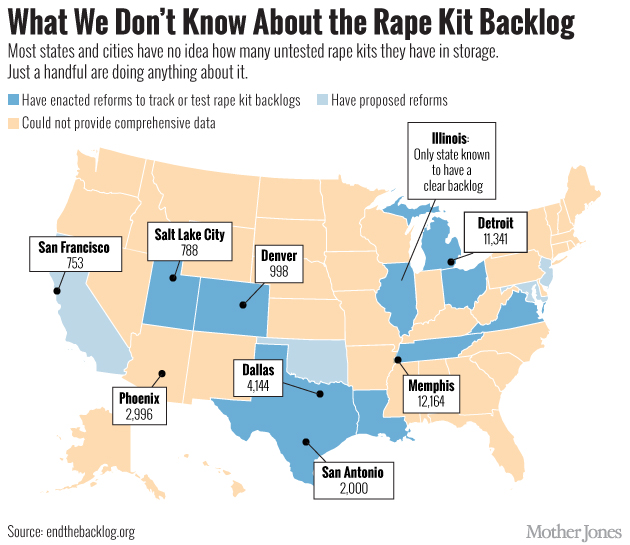 Kym Worthy, the county prosecutor in Wayne County, Michigan, has pushed hard to get through Detroit’s backlog, but has run up against funding shortages. She plans to apply for a chunk of the $41 million grant as soon as it’s approved. “I’d like it to happen tomorrow,” she says. “Every day that goes by is other day that the victims have to wait for justice. This is first grant of it’s kind where they really got what it takes.”

But since June, the money has been stalled because Republicans, led by Senate Minority Leader Mitch McConnell (R-Ky.), want Democrats to allow them to add several unrelated amendments to the huge appropriations bill. One of those amendments, sponsored by McConnell, would make it harder for the EPA to enact new rules on coal-fired power plants. (His home state of Kentucky has a big coal industry). Another amendment—a longtime favorite of Sen. David Vitter (R-La.)—would strip Obamacare subsidies from congressional staffers. Republicans don’t have any intention of passing the main spending bill, argues a Senate Democratic leadership staffer; they’re just using the amendments process to stall it. “Demanding amendment votes is meant to distract from [Republicans’] disagreement over popular bills,” the staffer says. “Regardless of the outcome of the amendment votes…Republicans have indicated that they are not willing to support the underlying bill.” McConnell’s office did not respond to requests for comment, but the minority leader has previously accused Democrats of “shutting out” Republican amendments, and other Senate Republicans have accused red state Dems of not wanting to vote on controversial amendments in an election year.

In response to the GOP’s shenanigans, Senate majority leader Harry Reid (D-Nev.) pulled the bill from the floor in mid-June. Victims’ advocates are livid. “Every day that passes without this funding allows perpetrators to continue to roam the streets, confines potentially innocent individuals to prison, and deprives survivors the justice they deserve,” says Sarah Tofte, the vice president of policy and advocacy at the Joyful Heart Foundation, which runs a data project called End the Backlog that collects information about rape kit backlogs around the country.

If the Senate can’t pass the main appropriations bill, lawmakers may be able to squeeze the rape kit funding into a stop-gap spending measure this fall. But that option hinges on support from both House and Senate Republicans. Republicans on the House and Senate appropriations committees did not respond to a request for comment on whether they would back such a move.

The federal government does not count or track untested rape kits. Most cities and states don’t, either. In much of the country, the work has been left to journalists, human rights researchers, and victims’ rights advocates. The states with the largest known backlogs are Texas and Tennessee, which each have 20,000 untested kits sitting in storage. There are more than 11,000 unprocessed kits in Detroit, and over 12,000 in Memphis. Detroit recently tested 1,600 of its backlogged kits, which helped the city identify 87 suspected serial rapists and led to at least 14 convictions.

Here is a look at what we do know about the rape kit backlog around the country: