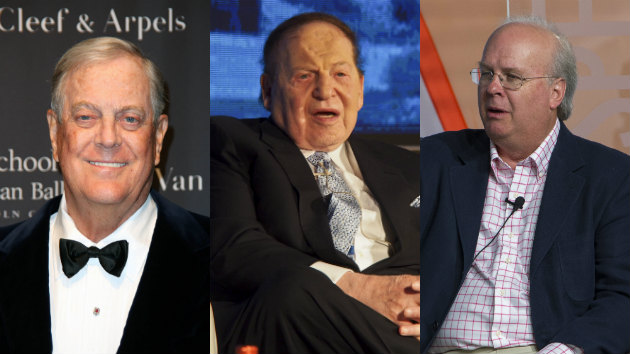 It’s the home stretch of the 2014 election season. No single theme or issue has dominated the midterms, but 2014 is on pace to be the Year of Dark Money.

Nonprofit groups, some well known (such as the US Chamber of Commerce and Americans for Prosperity, founded by the Koch brothers) and some obscure (America Inc., anyone?), have dumped huge sums of anonymous money into every competitive Senate race and many House contests. Here are five eye-opening indicators showing the rapid spread of dark money in this year’s campaign season—and why it’s going to get worse as Election Day approaches.

The $50 Million Mark
A milestone passed in late August: According to the Center for Responsive Politics, dark-money groups—nonprofits created under the 501(c)(4) and (c)(6) sections of the US tax code—had by then surpassed $50 million on elections. These groups, unlike political action committees and candidates’ campaigns, do not have to disclose their donors. So some of the key players looking to sway election results remain in the shadows. This was a new record and seven times the amount of dark money spent by the same point on House and Senate elections in 2010. And this week, dark-money spending for the 2014 cycle reached $63 million—just shy of the $69 million in dark money spent during the entire 2008 presidential election.

You Ain’t Seen Nothing Yet
Every politician knows that campaign season begins in earnest after Labor Day. If recent history is any guide, there is sure to be an unprecedented last-minute blitz of dark-money spending.

As the Center for Responsive Politics’ Robert Maguire notes, almost $7 million had been dropped by Labor Day in 2010. But by the end of that election season, dark-money spending had spiked to $130 million. That trend repeated in 2012: In late August of that year, dark-money spending clocked in at $51 million. Fast forward to Election Day and the total ballooned to more than $300 million.

The chart below illustrates how secret spending could accelerate in the final weeks of an election year. This cycle is not a presidential year, but with the US Senate up for grabs, dark-money spending could surpass the record-setting amount of 2012. “If the rate of spending from previous cycles continues,” Maguire writes, “the totals could reach upwards of $730 million or—if the rate seen in the last midterm holds—edge close to $1 billion.”

The Casino King Bets Big on Red—Again
Sheldon Adelson, the 81-year-old casino mogul who runs the Las Vegas Sands Corporation, is one of the biggest individual political donors in American history. In 2012, he doled out nearly $150 million to candidates, PACs, super-PACs, and dark-money nonprofits. His largesse propped up former House Speaker Newt Gingrich’s wounded presidential campaign during the primaries, and Adelson later gave more than any other donor to the super-PAC backing GOP presidential nominee Mitt Romney. 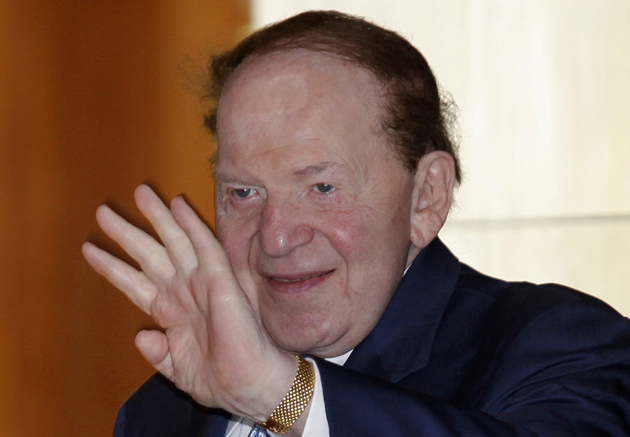 Despite a win-loss record in 2012 that would make a rookie craps player blush, Adelson is back at it in 2014. As the Daily Beast‘s Peter Stone reported, Adelson “is poised to donate close to $100 million this election cycle, with much of that total coming in untraceable ‘dark money’ to conservative groups.” Then again, if you’re worth $38 billion, as Adelson is, what’s another nine-figure spending spree to put your friends and allies in power?

The Koch Brothers Flood the Airwaves

If you live in a state with a competitive Senate race and you watch TV, there’s a good chance you’ve sat through an ad like the one above. TV viewers around the country have been inundated with political ads and negative messaging this campaign year—and for that, they can largely thank Charles and David Koch, the billionaire industrialist brothers, and their sprawling network of dark-money groups.

Koch-linked groups ran nearly 44,000 TV ads from January 1, 2013, to August 31, 2014, according to the Center for Public Integrity. Here’s another way of looking at that number: 1 out of every 10 TV ads in that 20-month time period came from a group affiliated with the Kochs’ political network. These groups include the Koch network’s flagship organization, Americans for Prosperity, the American Energy Alliance, Concerned Veterans for America, the Freedom Partners Chamber of Commerce, Generation Opportunity and the 60 Plus Association.

Democrats Love Their Dark Money Too

Don’t think that the dark-money action is all on the Republican side. Not only do Democrats have their own political sugar daddies—see Tom Steyer, the retired hedge fund investor who’s pledged to spend $50 million of his own money this year on congressional races—but pro-Democratic dark-money groups rank among the biggest spenders in this year’s contests.

Four of the top 10 dark-money spenders so far in the 2014 midterms are aligned with Democrats and have combined to spend $14 million, according to the Center for Responsive Politics. They are Patriot Majority USA (which paid for the above ad), the League of Conservation Voters, VoteVets.org, and the Environmental Defense Action Fund.

Democratic dark-money groups are as prone to twisting the truth as their GOP-allied counterparts. Patriot Majority, for instance, accused Rep. Tom Cotton, the Republican running against Sen. Mark Pryor of Arkansas, of wanting to give himself “taxpayer-funded health care for life.” PolitiFact rated that claim a lie. VoteVets.org recently blasted out a fundraising email falsely claiming that Sen. John McCain (R-Ariz.) posed for a photo with ISIS militants.

Craig Varoga, the president of Patriot Majority USA, justified his use of dark money in an October 2012 interview with Campaigns and Elections. “For the time being, it does not matter whether any of us agree or disagree with current campaign finance laws, or court interpretations and FEC rulings on these laws,” he said. “This brave new world is here.”