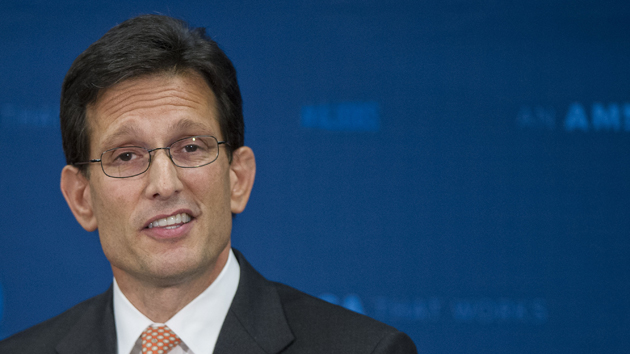 After Rep. Eric Cantor lost his primary to a tea party challenger in June, he could have stayed on as a lame duck, collecting his salary and voting as a full member of Congress through January 2015. Instead, Cantor decided to step down from his job as the GOP’s majority leader and resign his seat early. Cantor claimed that the decision to call it quits was in the interests of his constituents. “I want to make sure that the constituents in the 7th District will have a voice in what will be a very consequential lame-duck session,” Cantor said at the time, explaining that he’d timed his decision so his replacement could be seated as soon as possible.

No one believed it—on August 1, the Huffington Post‘s Arthur Delaney and Eliot Nelson wrote that voters would soon hear about “Eric Cantor’s forthcoming finance job.” A month later, their prediction has proven true: On Monday, the Wall Street Journal reported that Cantor will soon start work at Moelis & Co, an investment bank. Cantor—whose experience prior to becoming a professional politician largely consisted of working in the family real estate development business—will earn a hefty salary for his lack of expertise: According to Business Insider, he’s set to make $3.4 million from the investment firm. “Mr. Moelis said he is hiring Mr. Cantor for his “judgment and experience” and ability to open doors—and not just for help navigating regulatory and political waters in Washington,” the Journal reported.

Democrats sell out, too. In 2010, former Indiana Sen. Evan Bayh announced his plans to retire in 2010 in a New York Times op-ed that bemoaned the lack of bipartisan friendships in the modern Senate and attacked the influence of money in politics. Yet shortly after he left Congress, Bayh signed up with law firm McGuireWoods and private equity firm Apollo Global Management and began acting as a lobbyist for corporate clients in all but name. Less than a year later, he joined the US Chamber of Commerce as an adviser. Sen. Chris Dodd (D-Conn.) pulled a similar trick, promising “no lobbying, no lobbying,” before taking a $1-million-plus job as the head of the Motion Picture Association of America, Hollywood’s main lobbying group.

According to the Center for Responsive Politics, 417 ex-lawmakers hold lobbyist or lobbyist-like jobs.