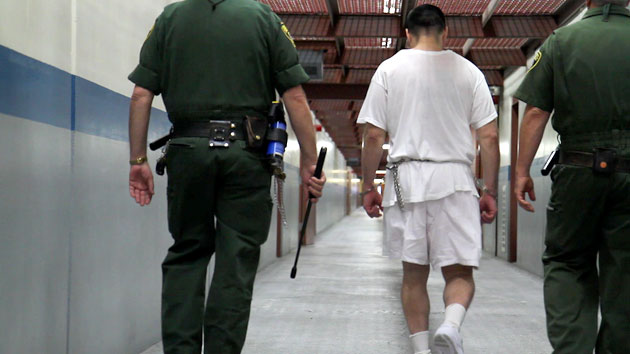 As someone who writes about prisons, and who two spent years behind bars, I devour nearly everything written about it, especially the long-form stuff. So I was excited when I saw that The Atlantic’s latest issue had a major story called “How Gangs Took Over Prison.”

Then I read it. Anyone who has ever survived anything traumatic—domestic abuse, rape, torture, war—knows the particular jolt that happens in the body when someone makes light of that thing that you once thought could destroy you. I am a former prisoner—I was held captive in Iran from 2009-2011—and a survivor of solitary confinement. In my experience as a reporter who writes about prisons, it is surprisingly rare that I come across people outside of the prison system who justify long-term solitary confinement. Even within the world of prison administrators many are against it. The last two times I’ve attended the American Correctional Association conferences, there have been large, well attended symposiums on the need to curb the use of isolation.

Graeme Wood, the writer of the Atlantic story, gives a different impression of the practice. He visits Pelican Bay State prison, which probably has more people in solitary confinement for longer periods than any other prison in the world. He goes to the Security Housing Unit, or SHU, where people are kept in solitary confinement or, as he gently puts it, are “living without cellmates.” When he enters, he says it’s “like walking into a sacred space” where the silence is “sepulchral.” The hallways “radiate” and the prisoners are celled in the “branches of (a) snowflake.” Beautiful.

It’s difficult to understand why Wood does not find it worth mentioning that the cells in those snowflakes are each 7×11 feet and windowless. Men literally spend decades in those cells, alone. I’ve been to Pelican Bay, and wrote a story about it in 2012. I met a man there who hadn’t seen a tree in 12 years. Wood tells us categorically that everyone there is a hard-core gang member. This is what the California Department of Corrections consistently claims, but if Wood did a little digging, he would find that number of the prisoners locked away in the SHU are jailhouse lawyers. There are people like Dietrich Pennington who has been in the SHU for six years because, in his cell, he had a cup with a dragon on it, a newspaper article written by another prisoner, and a notebook filled with references to black history, which a gang investigator counted as evidence of gang ideology. People get locked away in the SHU based on all kinds of flimsy evidence that doesn’t involve violence. I won’t say it’s a breeze to get ahold of the documentation of this stuff, but it’s not anything a seasoned reporter like Wood couldn’t handle.

Keep in mind that the UN considers solitary confinement for anything more than 15 days to be torture or cruel and inhumane treatment. University of California-Santa Cruz psychology professor Craig Haney did a review of psychological literature and found that there hasn’t been a single study of involuntary solitary confinement that didn’t show negative psychiatric symptoms after 10 days. He found that a full 41 percent of SHU inmates reported hallucinations. The corrections department’s own data shows that, from 2007 to 2010, inmates in isolation killed themselves at eight times the rate of the general prison population.

Wood, on the other hand, makes the experience of living in one of those cells sound transcendental. It is as if everyone is “on one of those interstellar journeys that span multiple human lifetimes.”

It’s hard to know where that impression came from because, in his story on prison gangs, Wood doesn’t interview prisoners. Well, that’s not completely true. He does go to the doors of several inmates’ cells—with prison staff—to ask them about prison gangs, then tells us breathlessly that almost no one would talk to him. Wood travels to England to interview a scholar on prison gangs, but there is no indication that he attempted to conduct a single serious interview with a prisoner. Not that California makes this easy—since 1996, the state has given prison authorities full control over which inmates journalists can interview in person. But still, you can write to anyone. Nearly every one of the dozens of people I’ve written in the SHU have eagerly written back.

Wood tells us that no prisoner can talk about gangs because doing so would mean death. Yet there are plenty who do. I’ve had inmates break down gang culture to me in letters, and I didn’t even ask them to. There are whole wards in prisons for gang dropouts, many of which are eager to talk about the life they left behind. There are former prisoners like Andre Norman who used to be in gangs and now make their living by exposing gang culture. These people are primary sources that could have given Wood intimate details and a nuanced understanding. They’d also tell him about what it’s like to live in a place like Pelican Bay, though chances are he wouldn’t find anyone who would describe living in the SHU as “interstellar.”

It’s remarkable that a publication as reputable as The Atlantic would run such a thinly sourced story. Its 5,000 words are based almost entirely on four sources: an academic, the spokesperson of Pelican Bay, the warden, and the gang investigator. Wood prints their claims straight away. At the beginning of the story, for example, Wood is standing with the prison’s spokesperson, Lt. Chris Acosta, and together they are looking out onto the yard, observing prisoners and their behavior. Then he quotes Acosta saying, “There’s like 30 knives out there right now. Hidden up their rectums.”

Well hold on a second. How did Acosta know that? Did Wood verify this? How did his editor let that one slide?

Claims like this make what could be an interesting story hard to trust, and the piece is full of them—the size of the bar of soap on an inmate’s sink indicates what kind of phone he shoved up his ass; requests for halal food are a way to “create work for the staff” rather than a sign of religious conviction. Since when does this pass as acceptable journalism? Prison reporting is tricky, sure. When I reported on Pelican Bay, I had to take pains to verify every claim a prisoner made through extensive documentation or verification by prison officials. No good journalist would print a claim made by an inmate about a guard, for example, without carefully corroborating it. Many prisoners have an agenda. But so do guards and wardens. Prison officials have a long record of trying to stymy public inquiry. I was recently booted from a prison convention—for which I was registered—for my reporting. When you have two sets of people, like inmates and prison administrators, who each have interests in misrepresenting each other, you make every effort to verify their claims about each other. Those are the ground rules of journalism.

One last thing. Jokes about things in prisoners’ asses are not funny. In a presentation for Wood, a gang investigator likens gang leaders to 1980s Chrysler chairman Lee Iacocca. As an aside to us readers, Wood quips, “I have found it impossible to look at a picture of Iacocca without imagining him stuffing his cheeks and rectum with razor blades.” It sickens me that I am meant to laugh at this.